During the French invasion the Mexican nationalists in the southeast reacted with the same bravery and enthusiasm as elsewhere but under very adverse conditions including poor communications and inadequate supplies. They could not obtain arms from foreign sources for lack of resources to buy them; and they could not export the few products they produced because the border was in enemy hands. Central American mercenaries were stationed constantly along the Guatemalan frontier, enjoying the protection of the dictator of that time, General Rafael Carrera. The invaders and conservatives managed to capture the old state capital, San Cristobal de las Casas. When they in turn were defeated, they retreated towards the Suchiate to recuperate and rearm in Guatemala to return again rested and reprovisioned to continue their attacks.

In view of this situation General Porfirio Díaz, commander in chief of the Army of the East with headquarters in Oaxaca, on 12 December 1864, designated as governor and military commander of Chiapas, Coronel José Pantaleón Domínguez, former commander of the famous Batallón Chiapas, which had distinguished itself at Puebla. Domínguez took office on the following day in the new capital, Tuxtla Gutiérrez. Domínguez’ main preoccupation for the next two years was to obtain enough funds to organize, equip and provision forces of sufficient strength to maintain republican control of the state. To accomplish this end he imposed special taxes and forced loans on the richest people under his jurisdiction, in the important cities as well as the smaller municipalities, towns, plantations and ranches.

On 24 July 1866 Domínguez, ordered the issue of $16,000 in provisional currency of compulsory circulation, divided, into five denominations as follows:

The decree states that the notes would be of compulsory acceptance by persons who possess goods worth five hundred or more pesos, and in proportion to their respective wealth, as estimated by the authorities and personnel in charge of the distribution. The government would remit the notes to various state offices and these in turn would distribute the number indicated through local municipal and tax collection offices with the aid of two honest and respected local residents. Quotas would be assigned to the taxpayer by the government centre of the region where the person was resident. It was the obligation of the government offices to demand and receive the sums involved from the persons in their jurisdiction, giving them in exchange the notes they should receive. To make it easier, the notes would be paid for in three installments: the first within fifteen days of receipt, the second during the next fifteen days, and the third, at the end of a like period. Persons who refuse to pay within the allotted time would be fined or, as a last resort, have their property seized and sold.

The notes were to be accepted by all treasury and tax offices of the state in payment of taxes. The holder could endorse them to other persons and whoever presented them for redemption would enjoy a ten percent discount on the payment being made.

So they were effectively a forced loan, but with the added advantage that the notes were transferable. 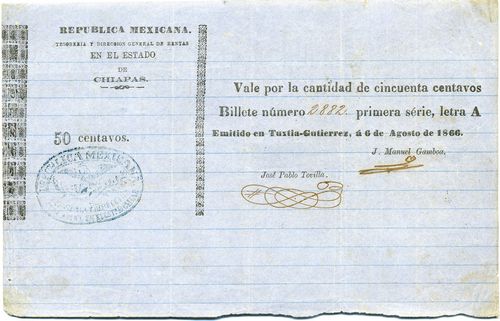 These notes were printed in blocks of four on thin bluish-gray paper taken from accounting ledgers, the pages of which were double letter size after removal from the binding. With the vertical binding fold down the middle, two obverses were printed on the top half of the sheet side by side, and two reverses on the bottom half in the same manner. The reverse of the sheet has two reverses printed on the top and two obverses on the bottom half making four complete notes when cut. Individual notes measure 21 x 13.5 cm.

The notes were dated Tuxtla Gutiérrez, 6 August 1866 and handsigned by J. Manuel Gamboa, the Treasurer and Chief Tax Collector of the State, and José Pablo Tovilla, Chief of the First Section.

Domínguez was deposed from power by a military coup on 4 September 1866, one month from the time that the above-mentioned notes were put into circulation, and this exaction must have played a part. However, after the incarceration of Domínguez and Juan José Ramírez, his Secretario General, the populace, who favoured Domínguez, effected his liberation and maintained him in power for several years, in fact until 1875.