The first Banco Minero Chihuahuense was set up by an anti-Terrazas faction from Guerrero, the mining area 100 miles west of Chihuahua. Celso González and Manuel de HerreraDe Herrera was born in Villa de la Concepción (now Ciudad Guerrero) in 1830. He was in charge of tax collection (recaudador de rentas) in 1849, jefe político of Guerrero, a deputy in nine local legislatures from 1871 to 1890, and jefe político of Chihuahua in 1876. He was interim governor in 1876 and stood in as substitute for Carlos Pacheco again in 1888. He died in 1898. were relatives by marriage of the Casavantes, the leading family in Guerrero, and together with Juan María Salazar, a rich businessman and land-owner with power bases in Cusihuiriachic and Parral, founded the firm of González, Herrera, Salazar y Compañía.

In the 1870s these three tried to move their firm’s centre of operations from Cusihuiriachic to Chihuahua and entered banking and urban transport. On 31 December 1878 their company received permission from the Trias administration to establish a bank, the Banco Minero Chihuahuense, and was authorised to issue up to 300,000 pesos in notes of twenty-five centavos, fifty centavos and one peso payable in legal tender or in hard cash (silver pesos) at an 8% discount (pagaderos en moneda corriente ó en pesos fuertes con el ocho por ciento de descuento, a eleccíon del Banco). The bank was given ten months to begin operationsPeriódico Oficial, 12 January 1879.

However, the bank closed in 1881 without officially issuing any notes. Nevertheless, these had already been produced by the American Bank Note Company, with the dateline ‘CHIHUAHUA 1880’, and a few slipped into circulation in early 1882.

On 27 March 1882 the jefe político of Parral sent an example of a banknote to Chihuahua, amid reports that a regular quantity of them were circulating at various places in the sierra. It transpired that Herrera, Gonzalez, Salagar y Compañía (sic) had sent some twenty notes out as specimens (muestra). The Secretaria del Gobierno wrote to the jefe político of Satevó (cantón Victoria), instructing him to collect from Cesario Sánchez or his agents any in circulation, and suggested the jefe político of Parral did the same. On 25 April 1882 the jefe político of Satevó reported that Sánchez had no such notesAMP, Gobierno, Gobierno del Estado, Correspondencia, caja 106, exp 12. These notes could have emanated from the first Banco Minero Chihuahuense (in which case they will have had different signatories), or been a trial run by the second bank (though that was established a few months later and in Ciudad Juárez in the north of the state), or been stolen by an enterprising Sánchez.

This second bank was set up by a group of financiers led by Luis Terrazas and his son-in-law, Enrique C. Creel, and including Pedro Zuloaga and Inocente Ochoa. On 31 July 1882 Ochoa was authorised to set up the bank in his home town of Ciudad Juárez, and to issue up to 300,000 pesos in notes of twenty-five centavos, fifty centavos and one peso, payable in legal tender or in silver pesos at an 8% discount (a la vista en moneda corriente a la par ó en pesos fuertes de plata con el 8 por ciento de cambio á elección del Banco). The notes had to be signed or stamped by the Administrador General de Rentas, the bank had to give adequate guarantees and open an annual line of credit for the government, and the state had the right to appoint an interventorPeriódico Oficial, 5 August 1882, though the last two conditions were removed on 5 December 1882Periódico Oficial, [ ].

It is difficult to determine the exact relationship between the first and second bank. The second group of financial backers presumably took over whatever assets the first bank had, but perhaps because of the political differences between the two groups, history was rewritten and the first few years of the bank tended to be forgottenThus, different sources say that in 1881, at the age of 27, Creel took over the branch of the Banco Minero Chihuahuense (Heliodoro Dueñes, Los Bancos y la Revolución, Mexico, 1945) or that Creel founded the bank in 1883 (Chihuahua Enterprise, 30 October 1897). El Norte, 5 July 1900, confirmed that the bank was opened on 31 July 1882.

Similarly there is confusion over the original shareholders. Certainly Ochoa was the person who actually gained the concession, but other sources state that he was backed by Luis Terrazas, Carlos Zuloaga, and Miguel Salas; that there were four founding shareholders with equal shareholdings; that there were five shareholders - Luis Terrazas, Enrique Creel, Pedro Zuloaga, Inocente Ochoa and Mariano SamaniegoMexican Financier, 18 January 1896; and that Terrazas and Creel joined Pedro Zuloaga as shareholders (in the old Banco Minero Chihuahuense) in 1884[                  ] In August 1883 the bank was referred to as the bank of Creel and Co (El Paso Herald, 5 August 1883). The general gist, however, is clear. The Guerristas lost out to the Terrazas faction, with Luis Terrazas’ closest associates ending up holding the bank’s shares.

On 5 July 1883 the earlier concession was altered so that, of the 300,000 pesos already authorised 150,000 could be issued in one peso notes payable in hard cash (pagaderos a la vista y á la par por pesos fuertes) and therefore carrying the description ‘VALE POR PESOS FUERTES A LA PAR’. AlmadaFrancisco Almada, Resumen de la Historia del Estado de Chihuahua, Mexico, 1955 records that on this date the bank was permitted to issue another 300,000 pesos, on the same conditions, exempted from taxes for five years and allowed to move its main offices to Chihuahua. The first clause is definitely a misreading of the concession but he might have had a different source for the final statementThe Chihuahua Enterprise, 11 January 1896, said that the bank was ‘established in Chihuahua’ in 1883.

On 23 March 1886 the Secretario de Hacienda, Manuel Dublán, signed an agreement with Carlos Pacheco, representing the banks of Chihuahua, José del Collado, a director of the Banco Nacional de México, and Ramón Uzandizaga, manager of the Chihuahua branch. In it they recognized that the Chihuahuan banks had been established by concessions from the state Congress, at a time when federal control was unclear, and so the Secretaría de Hacienda confirmed the Banco Minero Chihuahuense’s concession for a further 25 yearsAHBanamex, Actas del Consejo de Administración, 23 March 1886, folios 246-250.

The American Bank Note Company records the following printings. The themes for the vignettes were suggested by Manuel de Herrera and the proofs were originally approved in February and March 1880.

The $1 face plate was altered on 10 June 1885 by engraving three signatures, so there were two $1 face plates in the vaults. The colour was changed, and 80,000 notes were printed in brown and overprinted with the legend VALE POR PESOS FUERTES A LA PAR in red.

In November 1886 the serial letter on the $1 plate was changed from A to B. 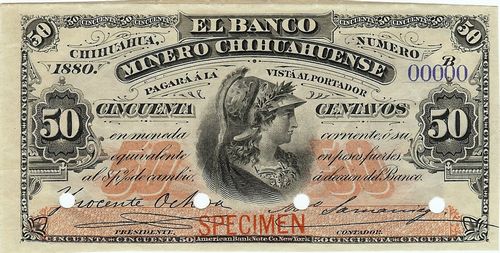 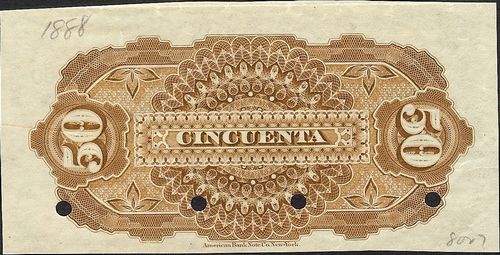 whilst $1 Series B specimens with a brown background and red overprint VALE POR PESOS FUERTES A LA PAR are dated January 1888.