The revolution in Aguascalientes

Apart from a late series of cartones the authorities in Aguascalientes did not issue any notes, so those from the major factions circulated, depending on who had the upper hand.

Aguascalientes was captured by the Constitutionalists on 22 July 1914, who would have brought with them the notes decreed of forced circulation by Carranza, including Monclova, Ejército Constitucionalista, sábanas and those from Durango.

On 11 November 1914 an Aguascalientes and a Mexico City newspaper reported that Villa had launched a new issue in Zacatecas, which had reached Aguascalientes and was causing concernEl Demócrata, 11 November 1914; El Sol, 11 November 1914. As there was no such issue, these might be references to the arrival of dos caritas in Aguascalientes, brought from ZacatecasHowever, earlier, on 6 October 1914, Marion Letchner, the U.S. consul in Chihuahua, had reported that Villa has ordered printed and dispatched from Chihuahua to Zacatecas immediately with all haste possible one million Mexican dollars under conditions suggesting its use in [suborning?] participants in the approaching Aguascalientes convention (SD papers, 812.5157/63 telegram to State Department) and this might be the source of the news item. 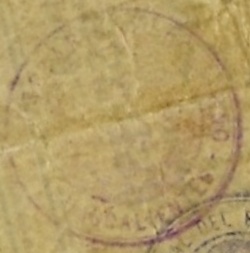 On 27 February Villa wrote from Guadalajara in response to an enquiry from the governor, Benito Díaz, listing the notes in forced circulation, including the Gobierno Provisional notes which, if they had not been revalidated, needed to be revalidated straightaway in the Oficinas del Timbre of the statePeriódico Oficial, Aguascalientes, Tomo I, Núm. 11, 6 March 1915. This reiterated the decree núm. 4 that he had issued in Guadalajara on 13 February.

In Aguascalientes the Chihuahua notes were less acceptable than Carrancista issues. On 23 February 1915, Filiberto Sánchez and other delegates stated in the Convention that, although Roque González Garza had decreed various issues of forced circulation, merchants in the city refused to accept Villista or Durango notes, on the excuse that they had no change, though they were happy to take Gobierno Provisional de México or Ejército Constitucionalista notes. As the army and some delegates had recently been paid with Villista or Durango notes they hoped the executive would enforce its decree with heavy finesAGN, Fondo Convención, caja 5, exp 2, f 144.

Rather than specifically annul the Carrancista issue the Governor, Benito Díaz, listed the issues that were of forced circulation. On 2 March 1915 he repeated Villa’s circular that these included, as well as the two Chihuahua issues and others undeniably from Villa’s faction, the Monclova and Ejército Constitucionalista issues and the early Gobierno Provisional which, if not REVALIDADO, had to be revalidated in the Oficinas del Timbre del EstadoPeriódico Oficial, 6 March 1915.

By this time the dos caritas were being refused by post offices and railway stations, in accordance, they claimed, with superior orders. The governor, Benito Díaz, told the state offices under his authority to accept them and asked Francisco Escudero, the head of Hacienda y Fomento in Chihuahua, to instruct the federal offices to do the same. On 22 March Escudero from Chihuahua, in reply to a query from Díaz, repeated the list of notes in forced circulationPeriódico Oficial, 27 March 1915.

On 17 April, in its first reference to disowning Carranza, the Periódico Oficial reported that since some people thought that the prohibition included the Estado de Durango notes, it was repeating the 27 March telegramsPeriódico Oficial, 17 April 1915. However, this meant that only the later Carranza issues were actually excluded.

On 15 June 1915 Gaston Schlutz, the American consul, reported that because the small denomination Villa money was accepted as currency in Guadalajara and the surrounding territory then controlled by Obregón, everyone in this city was hoarding the 25c 50c and $1 notes and there was a dearth of small change, which made it difficult and in some instances impossible for the merchant to make the necessary changeSD papers, 812.00/15284.

The Carrancistas, under Obregón, took Aguascalientes on 10 July 1915.