The Bank of Lower California 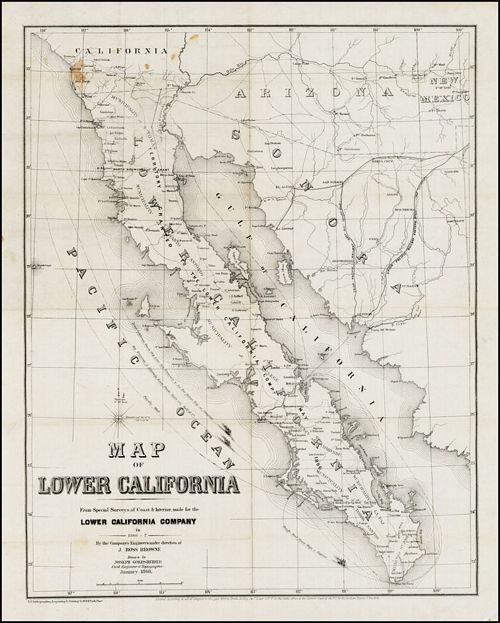 These notes were produced at a time when Americans were interested in pursuing recent mineral discoveries in Sonora and the northern part of Baja California and Mexico was eager to encourage settlement by granting floating colonial grants of vast tracks of land to companies willing to promote settlement in the region. The most noteworthy of these attempts was that of the filibuster William Walker while the second major effort to colonize Baja California was undertaken by the Lower California Company.

This company was formed to take over a land grant contract originally negotiated in 1864 by Jacob P. Leese. It was incorporated by the State of New York in May 1867, with General Benjamin F. Butler as president, Drake Dekay as secretary and Samuel L. J. Barlow as counsel. Captain J. B. Isham was designated general superintendent. 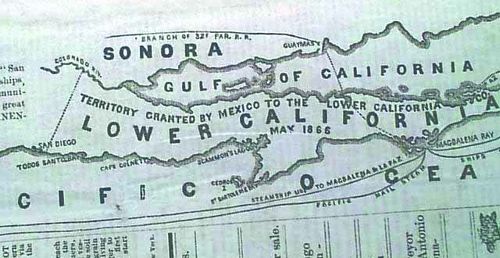 The  Baja California peninsula run from about latitude 23° N to 33° N, just below San Diego whilst the grant covered the land from 24° 20‘ N to 31° N, so almost the whole of the peninsula. The company’s plan was to bring 11,000 Chinese immigrants to their grant area to exploit it for the company’s benefit. During the California gold rush and the development of the intercontinental railroads a large number of Chinese came to California so the idea had already been tested and worked. Contrary to in the United States these immigrants were to be granted citizenship and all rights under the Mexican constitution. In addition, they would not be required to serve in the army for five years. 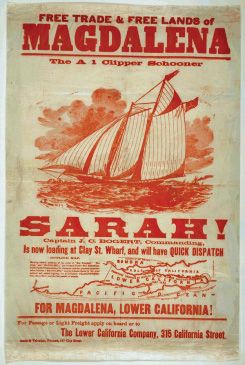 The company enlisted John Ross Browne and a group of scientists for a mission to survey the peninsula. Browne was responsible for several excellent promotional pamphlets including Lower California: Its Geography and Characteristics, with a Sketch of the Grant and Purposes of the Lower California Company with an insert map (above), which was the first modern depiction of the peninsula and provided the first graphical depiction of its interior and commercial prospects, including the potential for yet to be exploited harbors, mines and fisheries.

The headquarters of the company was located at Magdalena, a large bay about two thirds of the way down the peninsula, and it operated for a few years, including producing its own newspaper, The lower Californian, published at the (projected) City of Cortes, Magdalena Bay, Lower California, and distributed from San Francisco. However, the report from the scientists was largely unfavourable and the Lower California Company ultimately had its grant rescinded by the Mexican Government in July 1871, for failure to attract sufficient settlers to the region. The company ignored the order to suspend colonization and evacuate, whereupon the Mexican government sent troops to enforce its decree. There occurred a military confrontation between the company's local staff and the Mexican troops, which resulted in the colony being forcibly closed down. Drake Dekay, the signatory on the note, had by this time become U.S. Consul at Magdalena and he sought to obtain official American intervention "to protect American lives and property"ABCS, Año 1871, legajo III-V-106, doc. 701.

Known examples are three 10 cents notes (all remainders), a one dollar note with the serial number 48396 but no signature (illustrated) and another number 48122 with a signature of the manager, which, if genuine, suggests that the notes were actually in use. Both denominations carry the comment "This Currency is temporary issue for use until engraved notes are prepared and agencies established in Mexico and Europe". 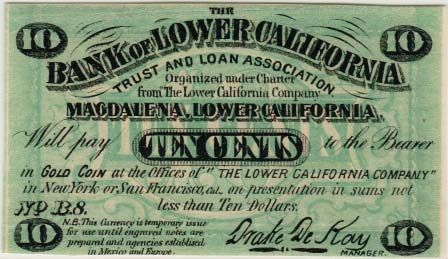 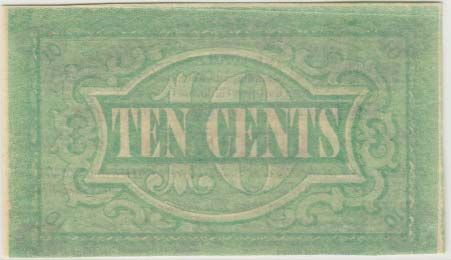