In 1901, the Díaz regime granted a concession to the Pan-American Railway Company (a Nebraska company incorporated in New Jersey) organized by J.M. Neeland (a Los Angeles contractor) and the Everett family (Franklin, Walter, E.B. and Fremont) of Omaha, Nebraska, to build a railway from San Geronimo, Chiapas to Tonolá on the Guatemalan border. Neeland, the force behind the project, had just completed a 175 mile spur connecting the Chihuahua and Pacific Railroad to mines owned by Enrique Creel in partnership with a group of Americans. Neeland's relationship with Creel proved invaluable because he gained for the Pan-American Company one of the bank concessions granted by the Díaz regime. No other American-owned bank was chartered as a state bank or as a bank of issue, and no other railway company was permitted to establish a bank as a condition of its concession.

The way the Everett family tell ithttps://ourfamilyhistoryblog.com/ is that Neeland, a Los Angeles promoter, got in touch with Walter Everett about the possibilities in developing a railway in southern Mexico. A European firm had gone bankrupt in such an attempt in the 1880s, but had left some completed track, and a great deal of machinery. The idea was to buy the concession from the Mexican government and complete the line. Included in the deal was the privilege of establishing this bank of issue in Chiapas. Although Walter was convinced that the deal was a very attractive one, the father, Franklin, though then nearly seventy, insisted on a first-hand look, so he made a most difficult journey through Mexico and returned to participate in the venture. Next, in 1901, Fremont Everett and his brother-in-law Herbert Shumway made a similar trip and came home similarly impressed.

With many difficulties, the Nebraska farmers, as they were referred to by workmen and other employees, managed to build a considerable amount of track in the jungles within the prescribed time limits. As the non-resident president of the company Walter Everett frequently had to make arduous trips from the United States to settle disputes; Fremont, whose role was that of banker and paymaster, admitted that he was not very successful at the management level.

Fremont Everett left Lyons, Nebraska, on 24 December 1901 to California with its wife Mary Evelyn Shumway and daughter Clara, accompanied by Delbert Lyon, who would serve as cashier. In San Diego they boarded a ship which took them to Mazatlan, Sinaloa, where they got $50,000 in silver pesos, part of the initial capital for the opening of the bank. Lyon took the money by boat to Tonalá while Fremont went to Mexico City to raise more funds, then travelled on 10 February 1902 via Oaxaca, Salina Cruz and Tonalá to Tuxtla Gutiérrez, a journey that took two weeks.

Three years were enough for the Nebraska farmers, and when they were able to sell out to a Kansas City firm, and the Mexican government paid them bonuses in cash and bonds for the work already completed, they were glad to return home.

There is no doubt that, to put it mildly, Neeland was a crook and heavily involved in defrauding Mexican and U.S. investors through dubious tropical plantation schemessee William Schell, jr, “Banco de Chiapas: a license to print money - collaborators, swindlers, and the Porfirian banking system” in SECOLAS annals, vol 24, pp 58-68, 1993 but the Franklins appear to have been industrious and their involvement in the Banco de Chiapas (and any possible loans or the use of its notes to meet the construction crew’s payroll) was limited to a short period of time. 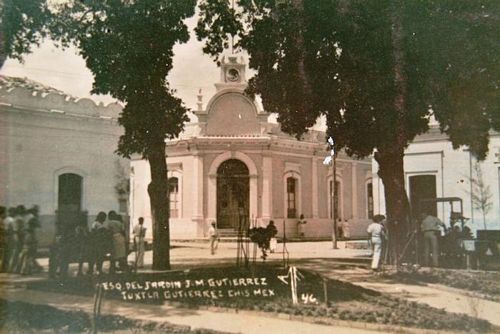 The bank’s offices were in a building of neocolonial style on the corner of calle del Estado y avenida México (now calle Central and Primera Sur). Its president was Walter Everett; general manager (gerente general), Fremont Everett, treasurer Edward B. Everett and its cashier (cajero) Alfred B. Lyon, all originally from Nebraska, United States.

The bank failed completely in its first two months. It had no deposits and the new notes were not accepted. The public distrusted the bank because commerce in Tuxtla was based on the Guatemalan currency known as “cachuco” and the businesses run by the well-known families such as the Casa Farrera, Gout or Cueto, already functioned as traditional banking institutions.

In May 1902 the North Americans handed the bank over to Ramón Rabasa Estebanell who was tesorero general in the government of Rafael Pimentel. Rabasa was the perfect person to restore the fortunes of the bank, given his financial knowledge and experience and his political connections.

For 1906 Ramón Rabasa was designated State Governor and left the bank in the hands of four board members (consejeros propietarios): Rómulo Farrera, Juan B. Brenchley, Enoch Paniagua and Carlos Tiedemann with Antonio Rancé, Leopoldo Gout, Noé Vázquez, José Manuel Velasco and Federico C. Serrano as consejeros suplentes. For their part Ciro Farrera and Carlos Meyer stood down from the offices of consejero propietario and suplente, respectively.

However, in 1907 the bank suffered from the economic crisis in the United States, which led to a withdrawal of deposits and the exchange of bank notes for hard currency, as well as affecting the state’s exports.

The end came when President Diaz suddenly issued, on 19 June 1908, a reform to the Banking Law because all local banks had abused their short and long-term lending operations. The Banco Oriental de México, based in Puebla, announced that it would absorb the Banco de Chiapas and the Banco de Oaxaca, as it had already acquired almost all of their shares. The Banco de Chiapas did not make a formal announcement in Tuxtla. Only Rómulo Farrera gave a statement to the Mexican Herald, hinting at the Banco de Chiapas' plans, saying that "the way out for small banks is to join the big banks"The Mexican Herald, Vol. XXVII, No. 36, 6 October 1908. In January 1909, the Banco Oriental started the absorption proceedings with the Secretaría de Hacienda, stating that the object was “to create a large regional bank with powerful elements that could serve the interests of industry and commerce”.

By the end of March, the Government of Chiapas liquidated the $9,501 owed to the declining bank. On 7 June the merger was formalized. Few people noticed the change in Tuxtla. The bank continued operating in the same small facilities near the park, but now as a little used and almost abandoned branchbased on J. Manuel Salinas Sánchez, “El banco de emisión de Chiapas, 1902-1908. Una experiencia singular a finales del porfiriato” in Pueblos y fronteras digital, vol.7, num.14, December 2012 – May 2013 and on Valente Molina, El Banco de Chiapas, pionero en Tuxtla (1902-1915), Tuxtla Gutíerrez, 2011.

J.O. Milligan, a businessman of Wakefield, Nebraska, arranged the printing of the bank's notes.The American Bank Note Company printed one set of notes in October 1901. It engraved special vignette portraits of Franklin Everett (C 245) for the $5 note and of J. O. Milligan (C 246) for the $10 note. Other stock vignettes used were C 781 for the $10 reverse, and C 777 for the face and C 787 for the reverse of the $20 note. The signature of bank president Walter Everett was typographed onto all notes.

The notes carry the signatures of Walter Everett or J. Brenchley as Presidente, Clemente Castillo as Interventor and Fremont Everett or Rómulo Farrera as Gerente.