In June 1915 El Paso’s delegation to the Adclub convention at Chicago distributed large amounts of advertising features, including 1,000 pesos of new Villa currencyEl Paso Herald, 16 June 1915. At a Press Association meeting in October 1915 G. H. Clements, El Paso publicity director of the chamber of commerce, presented an outlined program of entertainment and distributed booklets and several thousand pesos of Villa currency as souvenirsEl Paso Herald, 18 October 1915. In January 1916 El Paso delegates to the Overland Dealers excursion planned to distribute Villa currency as souvenirs. One money broker had given the automobile editor of The Herald an option on 500,000 pesos at a very low rateEl Paso Herald, 13 January 1916.

This counterfeit $5 note with its overprint will have been given away by members of the El Maida Shriners at the imperial shrine council in Buffalo, New York, in July 1916. According to an El Paso newspaper El Paso Herald, 7 July 1916 because of the uncertain conditions prevailing in El Paso, the trip of the El Maida patrol company to Buffalo was called off, but the shrine was represented by past potentates Samuel J. Freudenthal and John M. WyattFreudental was potentate in 1913, and Wyatt in 1909. Other potentates included mayor Thomas C. Lea in 1912 and Sol I. Berg in 1916 and high priest and prophet Robert W. Page.

At the end of December 1915 it was reported that the El Paso Chamber of Commerce had purchased large quantities of Villa currency for advertising purposesTucson Daily Citizen, 4 December 1915.

The Hilton Hotel (now the Plaza Hotel), at 106 Mills Avenue, was constructed by Conrad Hilton in 1929, on the site of the Sheldon Hotel, which burned down in that year. 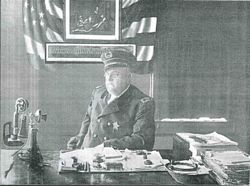 In November 1939 Shehady, an importer of Mexican art goods, wrote to the American Bank Note Company asking whether they could provide any more of these notesABNC letter David Shehady to ABNC, 4 November 1939.

In January 1940 the American Bank Note Company received an enquiry from R. C. Whittinghall and Company, 82 Duane Street, New York City about advertising, enclosing a copy of a $20 note with this advertisement. The ABNC sent the note to the Secret Service of the U.S. Treasury, who promptly confiscated itABNC letter R. C. Whittinghill & Co., New York to ABNC, 5 January 1940; letter Treasury Department, U. S. Secret Service to ANBC, 8 January 1940.