The aftermath of the revolution

The revolution had a profound effect on people’s trust in paper currency and banking institutions.

In 1916 it was reported that the only money in circulation in the neighbourhood of Cusihuiriachic, besides the worthless Carranza currency, were the cheques that the Cusi Mining Company paid to their employees and for local purchases. These were drawn on a bank in El Paso in American dollarsThe Effects of the Revolution in Mexico on American-Mexican Mining Interests. Memorandum submitted to the American-Mexican Commission, September 1916.

It took time, after the revolution, for Mexico to re-establish its financial infrastructure and in the meantime various firms appeared to carry out the most elementary banking functions. In Chihuahua the leading enterprises were:

David S. Russek y Cia.: this commenced trading on 28 September 1919 and acquired offices in Chihuahuaon calle Aldama and calle Independencia, Ciudad JuárezElias Acosta was the manager: the branch was situated at avenida 16 de septiembre 111, Parral, San Antonio, San Andres (Cuauhtemoc) and Mexico City. In 1920 it merged with the Casa Bancaria Caballero y Maciás. On 30 January 1921 it merged with the Casa Bancaria Rafael Calderon and, in the same year, with the Compañía Bancaria y de Inversiones de Ciudad Juaréz. It got into trouble, either because of the large investments it had made in the construction of the projected railway to Santa Clara or because it lost its liquid capital during the abortive uprising of de la Huerta, and on 10 December 1923 the governor of Chihuahua ordered its closure when a run was startedSD papers, 812.00/25577 report from Ciudad Juárez, 11 December 1923: SD papers 812.00/26574 report from Chihuahua, 11 December 1923: SD papers, 812.516/339 American vice consul, Chihuahua to Secretary of State, 15 December 1923. Two days later Chihuahua decreed a moratorium on all banks in the state not chartered by the Federal Government, effective immediately and lasting until 13 February 1924SD papers 812.00/26591. This was generally believed to have been an attempt to save David S. Russek and Company from failure. Mr. Russek, in a talk to the local Chamber of Commerce, assured creditors that the bank was solvent and, if given time, would liquidate all accounts SD papers, 812.516/339 American vice consul, Chihuahua to Secretary of State, 15 December 1923.

On 15 February 1924 the company reached an agreement with a committee representing its creditors allowing it four years to liquidate its accounts, then totaling $2,268,483.60, specifying 12½ % of its indebtedness must be paid every six months. The agreement provided that, in case the payments were not made, the committee would act as liquidator of the bank without the necessity of declaring the institution bankrupt.
Russek is said to have listed the large land-holdings inherited by his wife as among his assets at the time the agreement was made, and he evidently had a legal right to do so as it was accepted by the committee. However, this property was already embargoed by the Banco Nacional to cover payment of a debt by Russek to that institution. In the following year people began to question Russek’s good faith. Although he was pressed for a year to make payments he did not do so, but was known to have disposed of properties belonging to the bank. As the firm did not comply with the agreement, the committee held a conference with the Governor of Chihuahua on 4 January 1925 and the next day a notice appeared in the local newspapers for the benefit of all creditors that the committeeLic. Benjamin Elias was President, and Julio Ornelas, Secretary would proceed to dispose of all the bank’s assets with a view of covering its debts to the greatest possible extent. It was said that the amount still due the creditors was more than 600,000 pesosSD papers, 812.516/355, report of consul, Chihuahua to Department of State, 5 January 1925.
At the end of the four years the bank had succeeded in paying creditors $1,494,996.96, including interest but still owed $999,235.98 with interest. Russek told the creditors that the bank could completely liquidate its accounts if given two more years and on 11 December 1927 the creditors voted to allow it two more years, dating from 7 January 1928La Voz de Chihuahua, :SD papers, 812.516/516, report of consul, Chihuahua to Department of State, 13 December 1927. 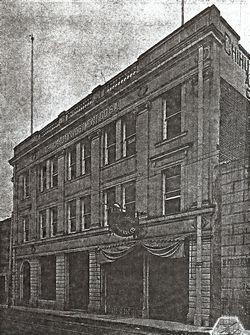 The Chihuahua Investment Company: this was founded by Tomás and William Dale, who had come to Chihuahua in 1884. It was incorporated in 1902 to take over the interests they already operated as Dale Brothers and Co. For five years they had premises at the corner of avenida Independencia and calle Victoria but in 1908 they moved to new quarters at Aldama 110Chihuahua Enterprise, 4 July 1908. They must have given up their premises to make space for the new Banco Minero offices. William was president and Tómas vice-president and treasurer.

By 1925 there were only two banks in operation in Chihuahua, namely a branch of the Banco Nacional de México and the Chihuahua Investment Company. The Chihuahua Investment Company enjoyed the greatest confidence, due largely to the reputations for ability and integrity of its President and Vice President, and had steadily increased its business during the past few years despite the fact that it did not do a general banking business and paid no interest on deposits. Its principal business was exchange, drafts, and loaning money at a high rate of interest, 12% a year generallySD papers, 812.516/373, report of consul to Department of State, 26 August 1925.

In May 1927 the Secretaría de Hacienda gave the company a concession to operate as a banco refaccionario, as it was able to demonstrate that it had the $500,000 oro nacional required by the Ley de Instituciones de CréditoExcelsior, 15 May 1927.

The Casa Bancaria Eugenio Caballero: this concern, which opened in 1926, invested mainly in mining. It sought a judicial liquidation on 18 December 1931Excelsior. 19 December 1931 and a moratorium on its debt. By 1935 it had paid all its debt plus the accrued interest.

Mines and Metals: the Mines and Metals Security Company, an American operation, began operations in Chihuahua in June 1918. The president of the corporation was George Johnson and the offices in a new building near the Plaza PrincipalEl Paso Herald, 13 June 1918.

Casa Bancaria Rafael Calderón: This merged with Russek on 30 January 1921.

La Compañía Bancaria y de Inversiones de Ciudad Juárez (Juarez Banking and Investment Company): this was advertised in 1920 as 'the only bank in Juarez'El Paso City Directory, 1920. Its offices were at 16 Comercio Street. Raymundo S. Garcia was president; Y. Rodarte, M. A. Tinoco and Isouro Carnerio vice-presidents; M. J. Rascon cashier and J. C. Torres assistant cashier with capital and surplus of $100,000. Later it had a capital of $300,000. It merged with Russek in 1921.

All these businesses stopped operating once the new banking system was established.