Two other financial institutions within the Terrazas empire were the investment bank, the Banco Comercial Refaccionario de Chihuahua, and the savings bank, the Caja de Ahorros de la República Mexicana, both operating out of the same offices at calle Libertad 401 on the corner of avenida Independencia.

Bancos refaccionarios (investment banks) were proposed, under the 1897 Ley General de Instituciones de Crédito, ‘to make cash loans for a period not exceeding three years on agricultural, mining, and industrial transactions for the payment of wages, for the purchase of seeds, raw materials, implements or machinery, or for expenses of administration and conservation’. However, as these banks could not issue banknotes and were restricted on the type of investments they could make, they could not compete with banks of issue, that skirted the laws restricting the term of their loans to six months by continually renewing them as they expired, and so few charters were issued.

The Secretaría de Hacienda y Crédito Público granted the Chihuahuan concession on 29 April 1902. Though Enrique Creel was the person behind the bank, government approval was officially granted to three relatives, all of whom were involved in the Banco Minero, viz. Alberto Terrazas, Eduardo Cuilty and Joaquín Cortazar hijo. Alberto Terrazas was the bank's first president.

The bank was capitalised at a modest 200,000 pesos. It was authorised to make loans of two years duration and carry out all types of banking and refactionary operations. In addition, it was empowered to issue bonds (bonos) for $100, $200, $500, and $1,000, to a value five times the amount that it had on hand or in near liquid securities (el efectivo que tuviere en caja ó en documentos de immediata realización)Periódico Oficial, 30 April 1902.

On 3 January 1903 the bank’s manager, Guillermo Muñoz, wrote to the American Bank Note Company for samples of Bonos de Caja similar to those of the Banco Central Mexicano, and a price for producing themABNC. The ABNC replied that it would need more details before it could quote, so on 28 January Enrique C. Creel responded from Washington, where he was staying, saying that the Bonos de Caja must be more or less the same size as those of the Banco Central Mexicano, and of the same denominations – some without coupons for a term of six months, and others with coupons for a term of 12, 18 and 24 months. The text would have to be similar, but the class of work did not need to be so costly, as the quantity of bonos the bank would issue in its first years would not be very large. The ABNC quoted lithography rather than steel plates and sent a quotation on 6 February, and models of face and back of the $100 denomination on 20 FebruaryABNC.

However, it was not until almost a year later, on 30 December 1903, that the bank returned the specimen with its amendments because it had taken various attempts to get federal government’s approval. The bank stated that on the face of the bond and at the foot of the figure, the words “BONO DE CAJA” had to appear in large letters and red ink, with the same words at the top in small type. This was required by the government in order that the bonds could not be mistaken for bank notes. The bank asked that the ABNC make the changes suggested and return the specimen immediately, in order that it could again send it to Mexico City for approval and then back to the ABNC to do the work, as it would like to lose as little time as possibleABNC.

The ABNC returned the model on 13 January 1904, but the matter then fell into abeyance for three years. Finally, on 6 May 1907 the bank returned the model and ordered 1,000 each of $100, $500 and $1,000 denominations. The $100 bond was to carry a coupon for $2.50, the $500 one for $12.50 and the $1000 one for $25.00. The bank asked the ABNC to make an effort to make the bonds ready within a very short time, as the time allowed by the government to put them into circulation was very short. In reply to a query the bank confirmed, on 21 May, that it wanted the bonds to be in three series (A to C) and each to have a single coupon. The ABNC sent face and back proofs on 29 June and the bank approved them on 4 July and requested the bonds to be shipped by Express as soon as they possibly could, as the bank was greatly in need of them. Finally, on 26 July the ABNC sent one box via Wells Fargo & Company Express, containing the 3,000 bondsABNC. 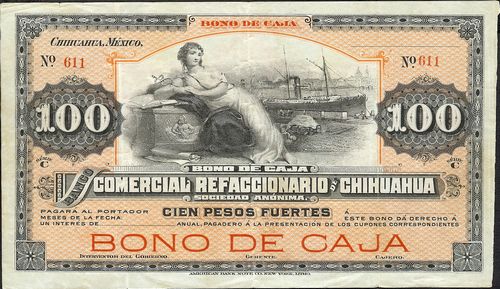 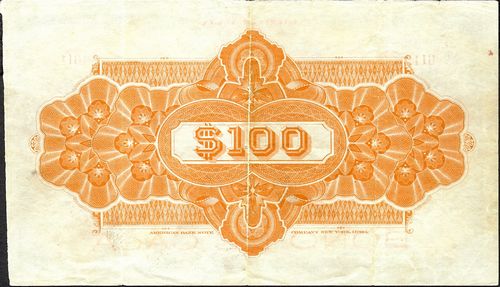 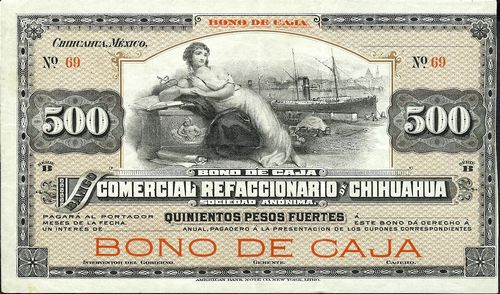 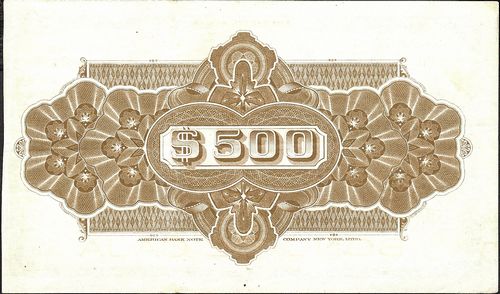 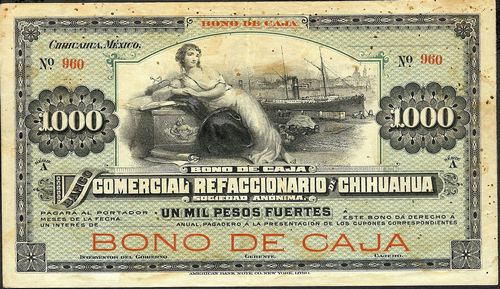 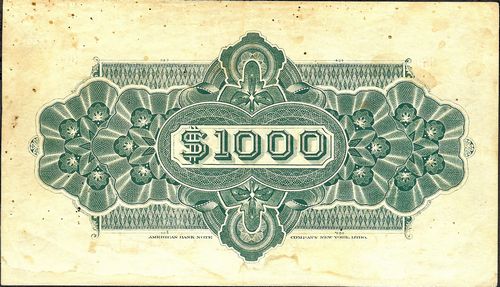 The bank issued only $66,000 worth of these bonds in September 1907 and redeemed them all between February and June 1910.

In July 1909 the bank's concession was modified in respect of the amount of loans it could issue.

By December 1918 the bank was in difficulties and Juan Creel suggested to Enrique Creel it be wound up, offering creditors perhaps 14 cents on the peso, with the Caja de Ahorros taking over responsibility to make the paymentsCEHM, Fondo Creel, 79, 20343 and 218, 55977 Juan A. Creel, El Paso to Enrique C. Creel, Los Angeles, 8 December 1918.

By 1927 the Banco Comercal Refaccionario was in liquidation. In spite of a resolution at a shareholders’ meeting on 7 April, it had not reached an agreement with its creditors and in June 1927 the Secretaría de Hacienda arranged for the Comisión Nacional Bancaria to oversee its operations, in order to protect the public’s interestExcelsior, 16 June 1927.

People associated with the bank included:

J. Martín Falomir: Born in 1868, the son of José María Falomir Gastelum, Falomir was Jefe Político of Iturbide (i.e. Chihuahua), a Deputy, and a partner with Luis Terrazas in the Compañía Minera La Virgen, a gas-works and a meat-packing plant. Like his brother Jesús,  Martín married a daughter of José María Maytorena, María de los Santos Maytorena Tapia (in Guaymas on 8 January 1900). He fled Chihuahua when Villa reached the capital, and retired to Tucson. After the revolution he worked in the banking and exchange department of the International Exchange and Commission Company of El Paso. He died in Chihuahua in 1954.
He was manager (gerente) of the bank from July 1908 until 1913.

Ignacio Alcarez: He was the bank’s accountant (contador) in 1905.

Manuel C. Santaella: He was Interventor intermittently between 1902 and 1905.

Cirilio Gutiérrez: He was also Interventor intermittently between 1902 and 1905.

Teodoro Montes de Oca: He was Interventor from August 1912 until February 1913.

The Caja de Ahorros de la República Mexicana was set up under a concession[text needed] granted by the local legislature on 22 May 1903 to Juan A. Creel, Joaquín Cortazar hijo and Lorenzo J. Arellano. It could establish branches in Chihuahua and other towns in the state and grant loans and mortgagesPeriódico Oficial, 23 May 1903. The society was capitalised at $150,000 divided into 1,500 shares of $100 eachEstatutos de la Caja de Ahorros de la Républica Mexicana, S.A., 7 December 1903.

By 1907 Juan A. Creel was the society’s president, Benito Martínez vice-president and Guillermo Muñoz A. manager. Martín Falomir was the manager in 1910.

Any Chihuahuan in financial difficulties would mortgage his property with La Caja de Ahorros. In 1912 Orozco's rebellion wrecked havoc on the state’s economy and many people were unable to keep up their mortgage repayments. In September of that year La Caja sent a circular to all mortgagees in default warning that they would take over their properties on the last day of the month. Many of the creditors lobbied the manager to make some concession since although they were presently unable to keep up their payments their properties were worth far more than their mortgagesEl Padre Padilla, 28 September 1912.

The Caja was used to issue "siege" notes in October 1913.

In March 1925 Juan A. Creel was arrested in Ciudad Juárez in connection with the collapse of La Equidad insurance companyPrensa, 24 March 1925 and the family investigated for alleged illegal banking activitiesEl Correo de Chihuahua, 24 July 1925; El Correo de Chihuahua, 28 July 1925. Allegedly, Juan A. Creel and Jesús J. Falomir had illegally combined three family banks, the Banco Minero, the Caja de Ahorros de la República Mexicana, and the Banco Comercial Refaccionario. Then in November Joaquín Cortazar hijo, Luis Creel, Manuel Prieto and Jesús and Martín Falomir were arrested in ChihuahuaPrensa, 15 November 1925: Prensa, 27 November 1925 and it was reported that the authorities would seek Juan A. Creel’s extradition from Los AngelesPrensa, 27 November 1925. Juan could not return to Chihuahua for some time for fear of arrest. Enrique C. Creel finally settled the problem by buying the assets of La Equidad and paying its policyholders.El Correo de Chihuahua, 14 November 1925; El Correo de Chihuahua, 25 December 1925; AGN, Ramo de Presidentes, Obregón-Calles, 707-C-34 Fernando Torreblanca (private secretary for the president) to Governor of Chihuahua, 22 August 1925 and J. A. Almeida to Torreblanca, 1 September 1925.