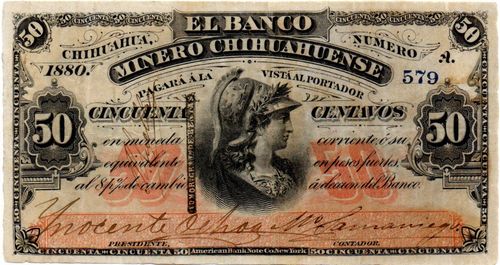 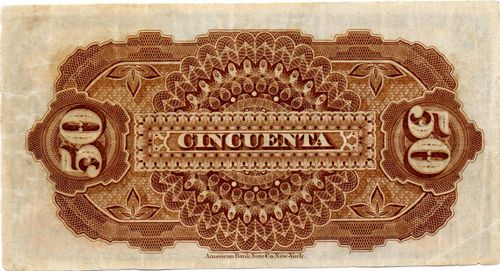 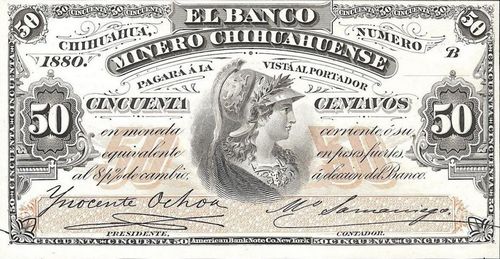 Five hundred sheets of unsigned 50c notes were stolen in 1885 but quickly recovered.

As stated, on July 1883 the bank’s concession was altered so that 150,000 of the 300,000 pesos already authorised could be issued in notes payable in silver pesos (á la par por pesos fuertes). According to a note in the ABNC records 118,146 notes were overprinted with “VALE PESOS FUERTES A LA PAR” in August 1883 so it was then that the bank moved from basing (some of) its notes on copper to silver. At the beginning of 1885 the experienced Santiago Wastall was put in charge of a new competitor in Chihuahua, a branch of the Banco Nacional de México, where, it was reported, he had to contend with the problem that most of that state’s existing banknotes were based on copper, rather than silverEl Album de la Mujer, Año 3o, Tomo 4o, Núm. 6, 8 February 1885. 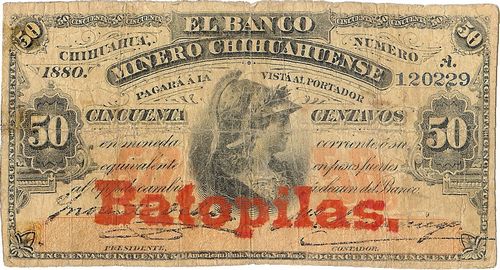 Creel had business connections in Batopilas, being on the board of the Compañía Minera de Batopilas. Francisco Larriva, who underwrote Compañia Minera de Batopilas notes, was an agent of the Banco Minero, so the bank must have provided some sort of banking service in the town.