After the 1897 reorganisation on 20 March 1900 the bank asked the federal authorities for permission to establish branches and agencies in the states of Coahuila, Durango, Jalisco, Nuevo León, Sinaloa and Sonora in accordance with Article 38 of the 1897 law. On 27 April 1900 the Secretaría de Hacienda agreed to all except Jalisco, as the bank had not demonstrated the necessary commercial links between the states, but in fact the bank appears to have restricted its direct activities at first to Gómez Palacio in Durango and Hermosillo in Sonora.

Besides its head offices, in 1913 the bank had branches in Parral, Gómez Palacio, Hermosillo and Guaymas and agencies in Ciudad Juárez, Ciudad Camargo, Ciudad Jiménez and El Paso. 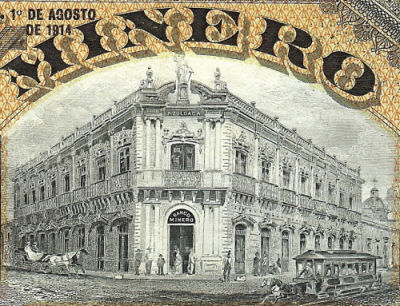 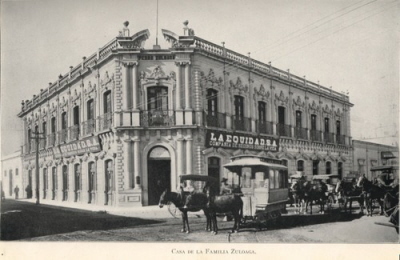 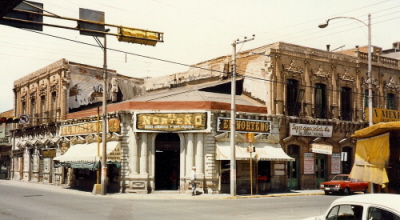 The reverse of the one peso, and obverse of the 10 and 50 peso notes carry a view of the bank’s first headquarters at the corner of calle Victoria and calle Ocampo. Though part of the first floor has now been demolished and the building, in common with most others in the neighbourhood, sells leather boots, its majesty is still undeniable (though this was enhanced in the vignette by the addition of a non-existent statue of Liberty atop the building).

This building was later used by the Monte de Piedad and the Equidad life assurance company (owned by Juan A. Creel, Juan Terrazas, Enrique C. Creel, Guillermo Muñoz and Lic. Joaquín Cortazar hijo)La Protectora assurance company changed its name to La Equidad S.A.. It paid out on policies, as expressed, in pesos fuertes until November 1913, when it changed to paying out in Banco Minero notes at no more than 19c. The Juez de Distrito tried to intervene (La Voz de Chihuahua, 17 November 1925). La Equidad collapsed in March 1925 as a result of which Juan A. Creel was arrested in Ciudad Juárez (Prensa, 24 March 1925). Later Joaquín Cortazar hijo, Luis Creel, Manuel Prieto and Jesús and Martín S. Falomir were arrested in Chihuahua (Prensa, 15 November 1925: Prensa, 27 November 1925) and it was reported that the authorities would seek Juan A. Creel’s extradition from Los Angeles (Prensa, 27 November 1925). Juan could not return to Chihuahua for some time for fear of arrest. Enrique C. Creel finally settled the problem by buying the assets of La Equidad and paying its policyholders (El Correo de Chihuahua, 14 November 1925; El Correo de Chihuahua, 25 December 1925; AGN, Ramo de Presidentes, Obregón-Calles, 707-C-34 Fernando Torreblanca (private secretary for the president) to Governor of Chihuahua, 22 August 1925 and J. A. Almeida to Torreblanca, 1 September 1925)..

In 1894, the bank moved into newly-constructed premises at calle Libertad and calle Segunda. 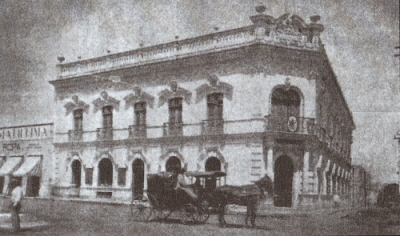 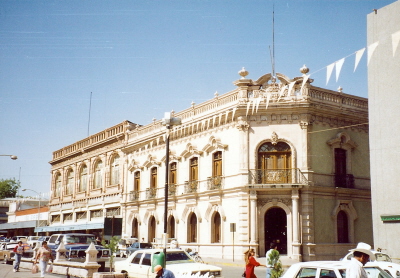 Then in July 1908 it moved across the plaza to the corner of avenida Independencia and calle Victoria, alongside the municipal officesChihuahua Enterprise, 27 June 1908. 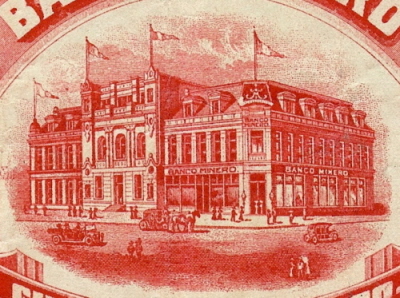 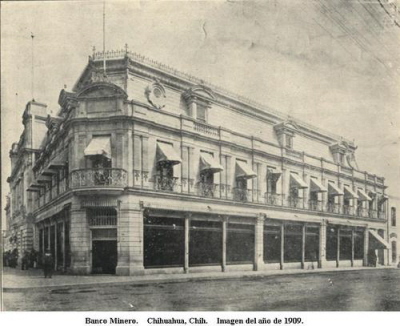 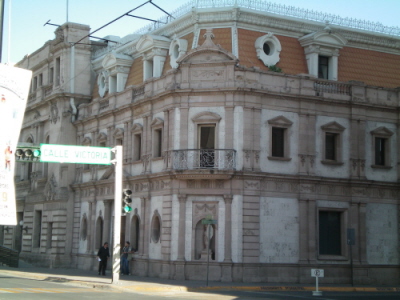 The branch in Parral was established by February 1889. It was located at the intersection of calle Capitán Blanco and calle Francisco Moreno in the north corner of Plaza Hidalgo. Its first manager was Arcadios Palacios; Guillermo C. Beckmann was manager in 1903 and and later Miguel Chávez Domínguez.

In February 1911 the branch had to weather a run. Someone started the rumour that the bank would close and long lines of anxious depositors lined up at the paying teller’s window but got their money without any question. Miguel Chávez Domínguez, the manager, assured the people that the bank was sound and stable and had more money than would be necessary under any circumstances. In the meantime A. Delgado, the paying teller, was perspiring under the strain of counting out coin. When the run ceased large stacks of money could still be seen within the paying teller’s cage and Luis Gómez, the receiving teller, was busy receiving deposits withdrawn during the runEl Paso Herald, 16 February 1911.

During the Orozquista rebellion, on 1 April 1912 Villa, defending Parral for the government, took a forced loan of $50,000 in efectivo from the bank. Villa departed from his usual norm of granting official receipts, since he felt that the money should under no circumstances be repaid. In the receipt he gave the bank manager, Sánchez Domínguez, he wrote that he considered this money ‘spoils of war’. "Villa came to our bank", Sánchez Domínguez wrote, "and, furious since he only found 3,500 pesos there, treated me and my son as if we were criminals and led us under military escort to the provisional prison he had prepared for us in his headquarters; there he told me that I would have to give him 50,000 pesos immediately, and if we did not do so, he would force us, the same night, to be at the very front of the military forces who were readying for the fight against the revolutionaries who attacked this town on 2 March. When he saw that these threats did not intimidate us, he became even more furious and threatened us with things that were worse than death and seemed very intent on carry out these threats". Sánchez Domínguez finally agreed to hand over the 50,000 pesosASDN, Cancelados, exp. XI/481.5/343, file of Francisco Villa, 18 June 1912. For Villa on his actions at Parral, see AGN, Madero Papers, 35609-11, Villa to Madero, 6 December and 21 December 1912. The bank received a receipt for $50,000 dated 1 April 1912 from Coronel Villa, Teniente Coronel Guadalupe Gaudea and Mayor E. C. Chávez, witnessed by the Administrador Principal de Timbre C. Carlos Villegas and Recaudador de Rentas C. Rafael V. Tarín, with the signatures legalised by the Presidente Municipal and Secretario of Hidalgo del Parral..

Villa's version is recorded by an unidentified correspondent. "At that moment Madero was called away by Gen. Téllez and I was left alone with the bandit [Villa]. Clad in picturesque charro costume, big-boned and alert, with heavy, bronzed face set with eyes bright and cunning enough to serve a tiger, he looked as one might imagine a robust representative of the lower regions who had disguised himself just enough to visit without fear of detention a more civilized realm. His speech was somber and slow, his silence deep and suspicious.
“Are the sacks really filled with flour, colonel?” I asked him.
He grinned. “Flour from the bank of Parral – Terrazas’ flour that financed Orozco’s revolution,” was the chuckling reply. He then volunteered the following information: “I took Parral after a fierce battle and for eleven days I was the master of the town, but, receiving no reinforcements and being surrounded by superior forces, I decided to abandon it. Before evacuating, however, I went to the Banco Minero, owned by Luis Terrazas, and approached the cashier’s window. “My name is Pancho Villa,’ I said. “How much cash have you on hand?” The cashier answered in a weak voice, “180,000 pesos, senor.” “I need them right away,” said I. “Fill the sacks that are loaded on the mules outside of your building and muy pronto.”
“Upon obeying, the frightened little man begged me for a receipt for the money, a matter for his personal protection. I handed him one that read: “I have received from the Banco Minero of Parral the sum of 160,000 pesos as a booty of war which the federal authorities will not have to repay.” Then I folded up the paper and wrote on top of it: “You have been for a long time supporting and paying money to the rebels in the North; just for change pay some of the federals in the South.” Then I patted the little man, gave him the receipt and a cigarette, and left him with a “muchas gracias, senor.”Revista de Revistas, quoted in Fort Worth Star-Telegram, 24 April 1914.

At his trial for insubordination Villa at first denied that he had robbed the Parral branch until he was presented by the judge with receipts for $160,000 “como botín de guerra”{footnote}El Abrogado Cristiano Ilustrado, 7 April 1912. 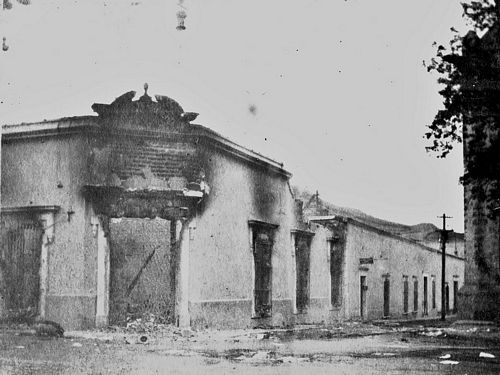 A few days later, on 4 April Parral was captured by the Orozquista General José Inés Salazar and the Banco Minero dynamited and burned by the rebels at a cost of $10,000El Paso Herald, 6 April 1912.

In 1913 when the branch staff deemed it necessary to leave because of the revolution, they packed up their documents, books etc and left them with various individuals in the townST papers, Part I, box 6, report 12 September 1913 Notice from M. Chávez D (gerente) and A. Chávez (contador). On 24 April 1914 the Recaudador de Rentas confiscated all the property of the branch in ParralAMP, Gobierno, Jefatura Política y Presidencia Municipal, Correspondencia, caja 69, exp 1. 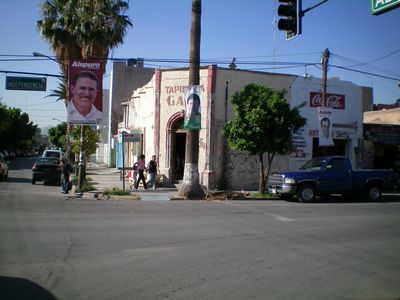 The branch in Gómez Palacio was established by January 1898Accounts in the AGN run from 8 January 1898. It was situated on the corner of calle Independencia and calle Allende. Miguel Torres was manager from April 1899 and Francisco C. Terrazas between 1907 and 1912In 1907 Rafael Garcia Galán was sub-manager and Aureliano Navarro cashier.

In May 1911, during Madero’s revolt, Orestes Pereyra, revolutionary Jefe de las Armas in Torreón, asked the branch for funds and when Francisco Terrazas, refused without a direct order from the government, took $10,000AGN, Fondo Gobernación Periodo Revolucionario, caja 54, exp 57. 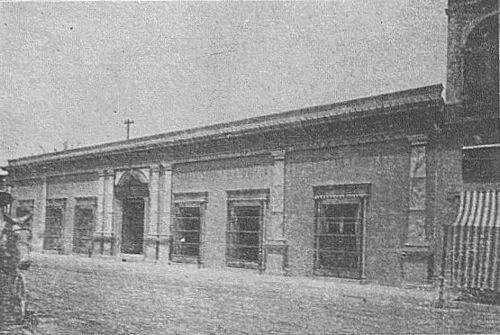 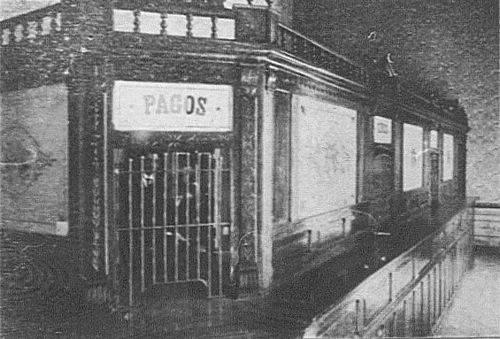 On 20 August 1902 the board agreed to establish a branch in Hermosillo with Ismael M. Ruiz, a ‘sonorense, muy conocedor de los negocios de aquel estado’, as manager. Ruiz was a native of Ures. After working at the mints in Hermosillo and CuliacánEl Centinela, 6 September 902 he had been the manager of the Banco Occidental’s branch in Culiacán in 1898 and then established and managed its branch in Colima. In August 1902 he travelled from Colima, via Mazatlán, to Hermosillo with his family, than went to Chihuahua to discuss establishing the Hermosillo branch with Enrique CreelEl Correo de Sonora, August/September 1902.

In February 1913 Ismael M. Ruiz was still manager and J. M. Munguia still cashier. On 24 February Ruiz reported that he had sent the branch’s reserves to El Paso, and thought that it would be wise to close the branch and move to NogalesST papers, Part II, box 1, 24 February 1913, letter to Juan A. Creel. By 24 April Ruiz was in Los Angeles, and advising against opening an office in Nogales, ArizonaST papers, Part II, box 1, 24 April 1913, letter to Juan A. Creel: 4 June 1913, letter.

The Guaymas branch was established some time between 1911 and 1913.

The money in the Banco Minero and Banco National were again removed to El Paso on 3 February 1912, as a preventative measure, though no further trouble was anticipatedEl Paso Herald, 3 February 1912.

In March 1912 Angel Calderón Urrutia was manager and Manuel Mejia Borja cashier. On 26 March 1912 wagons called at the branch and took away $75,000, its pro rata portion of Orozco’s bond issueEl Paso Herald, 27 March 1912. The branch closed its doors, and did not reopen until SeptemberEl Paso Herald, 24 September 1912. The next month further anxiety resulted in the removal of monies to El Paso banksEl Paso Herald, 21 October 1912.

In April 1893 merchants from Ciudad Jiménez ask the Banco Minero, Mexicano, Comercial and de Chihuahua to establish a sucursal to exchange banknotes, because the Ferrocarril Central would still not accept them in their offices. Otherwise, they threaten to refuse to accept notes issued by Chihuahuan banks. The Banco Minero discussed the matter, but could not promise anythingAGN, Antiguos Bancos de Emisión, Actas de Banco Minero. libro 1, 20 April 1893. A branch was established by 1905.

On 9 April 1905 the bank agreed to establish an agency in Nuevas Casas Grandes, under Julian Aguilar, on the same terms as the agencies in Ciudad Guerrero and Ciudad JiménezAGN, Antiguos Bancos de Emisión, Actas de Banco Minero, libro 3, 27 March 1905 to 8 October 1906.