The Banco de Santa Eulalia, later reorganised as the Banco Comercial de Chihuahua, lasted for twenty-five years before finally being taken over by the Banco Minero.

The firm of Francisco MacManus and Sons was established in Chihuahua in 1841 and were wholesalers and retailers in a variety of goods. The family also owned extensive property, had shared with Enrique Müller the concession for the Chihuahua mint and were involved in various other business projects. 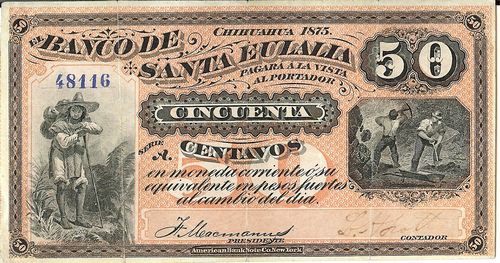 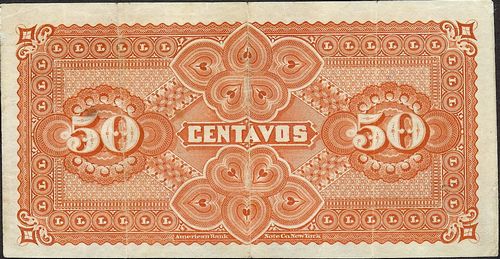 The bank's first issue consisted of three notes, printed by the American Bank Note Company, with the 25 centavos with its central vignette of a railway engine being a particularly well-designed piece. The notes were signed by Francisco MacManus or Tomás MacManus as President (Presidente) and L. H. Scott as Accountant (Contador). The 1875 to 1881 25c to $1 issues had Macmanus’ signature engraved with the second signature left blank: later issues had both signatures engraved.

Around May 1882 the bank issued a second series (series B) of the same three lower denominations with L. H. Scott's signature now engraved on the plate.