Amortisation of the copper coinage

There were at least two series of bonds for the amortisation of Chihuahua's copper coinage. 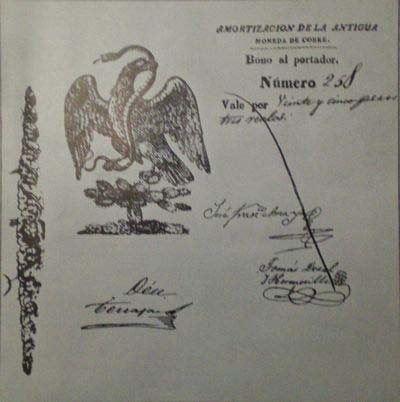 Firstly, on 20 January 1860 Governor Muñoz ordered the minting of a new issue of copper coinage and the amortisation of the existing coinage which, because of its poor quality, was easily counterfeitedDiscurso of Governor Muñoz, 8 April 1860. The holders of the old coinage were offered bonds and by 1861 more than 100,000 pesos was owed to owners of bondsDiscurso of Governor Terrazas, 18 September 1861. They still appear in the accounts of the Administración General de Rentas in 1866.

Then, during the war against the French both President Juárez, on behalf of the government, and Governor Terrazas, on behalf of the state, authorised the minting of copper coins at the Chihuahuan mintPeriódico Oficial, 27 December 1860. These coins were extremely unpopular, being not accepted outside the state and with difficulty within. By 1868 they had depreciated by 70% and in May of that year the central government agreed to the use of federal receipts for their amortisationLa Republica, 7 August 1868. This decision caused alarm in Chihuahua and a rise in the price of bare necessities, so Terrazas suggested levying a forced loan of $100,000 to retire the remaining coins[A ], letter of Terrazas, 28 August 1868.

Juan N. Zubirán went to consult with the Secretario de Hacienda in Mexico City, and on 20 August 1868 the President approved the project for amortisation. On 18 September Governor Feliciano Ruíz, in accordance with the 20 August decree, appointed Esteban Benítez president of the Junta Central de Amortizacion, composed of Domingo Leguinazábal, Juan Mandrí, José Félix Maceyra, Jorge Macmanus, Jesús Mariñelarena, Manuel de Herrera, Francisco Espinoza, Sr., and Agustín HinojosLa República, 10 October 1868. As Benítez did not accept the appointment, José Félix Maceyra was named in his place and Antonio Asúnsolo added as a delegate. The junta met the next day, and apportioned the following contribution on each canton.

The list missed out the canton of Arteaga. On 23 September governor Ruíz asked for the reason.

On 9 October Terrazas published the provisional regulations that would effect the amortisation. The central Junta, headed by José Félix Maceyra, would issue provisional receipts and a junta of businessmen would oversee the destruction of the coins.

The government of the state of Chihuahua agreed that the certificates would be printed by the Tesorería General de la Nación in Mexico City and sent to Chihuahua. The bonds were issued in a series of six values dated 31 October 1868. 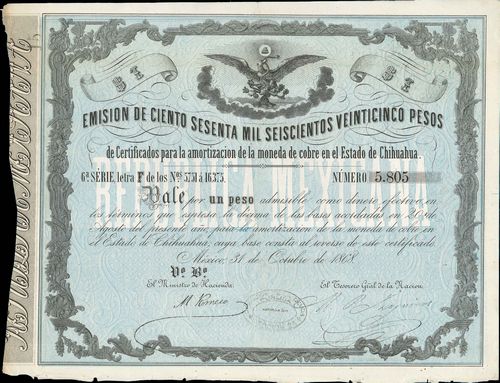 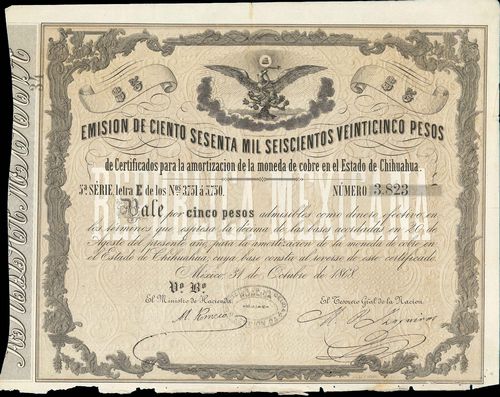 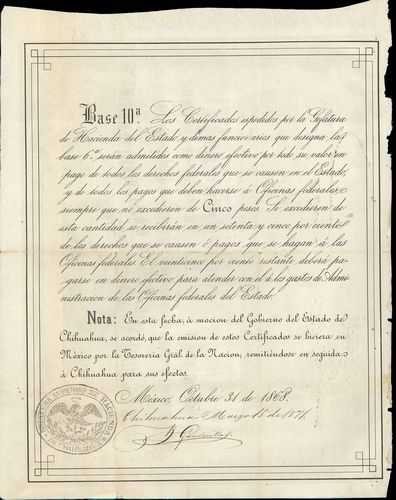 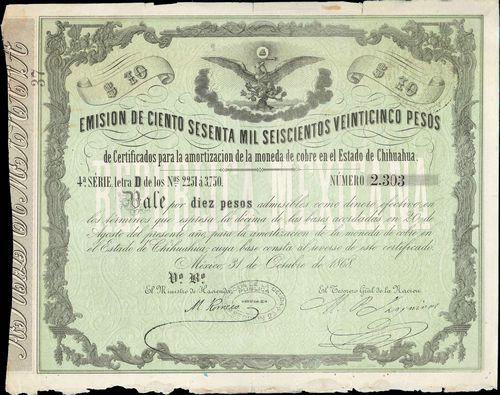 They had the printed signatures of Matías Romero as Ministro de Hacienda and Manuel P. Izaguirre, as Tesorero General.

These bonds were admissible as payment for all federal duties of less than $5 or up to 75% of any duty if it exceeded that amount, the remaining quarter to be paid in hard cash. This condition (base 10a of the regulations) was printed on the reverse of the bonds.

On 7 November 1869 the Commission for the Amortisation of Copper reported and proposed that the state government act as agent for the federal government in paying the $170,000 worth of bonds that had been issuedLa Republica, 19 November 1869.