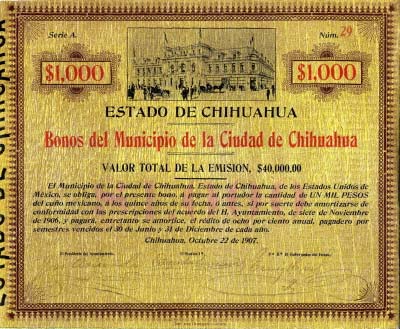 In 1907 the city of Chihuhua raised $40,000 to build an abattoir through a bond issue of 40 bonds of $1,000 each, payable 'al portador'. The bonds offered 8% interest and were to be redeemed in fifteen years, unless previously redeemed by lot. Seven of these were redeemed in six-monthly lots before the revolution AMC, Fondo Revolución, Sección Presidencia, Año 1910, caja 2, expediente 46; Año 1911, caja 3, expediente 10: 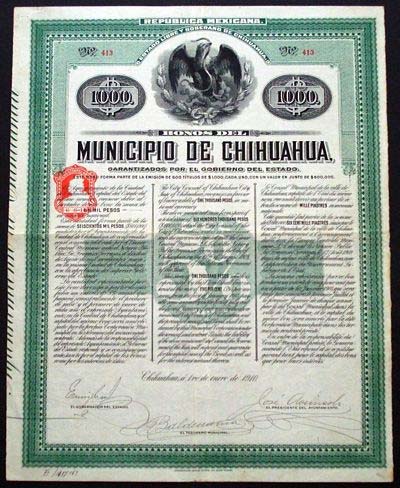 On 27 July 1909 the city was authorised to raise $600,000 through an issue of 600 $1,000 bonds, to improve the water supply and sewerage network and pave the main roads.On 30 August the American Bank Note Company in Mexico City asked its head offices for a price for 600 bonds, with 100 coupons, carrying a special vignette of the Chuvíscar ReservoirABNC. On 27 November José Asúnsolo, the jefe politico, placed the orderABNC.

On 24 December the ABNC sent models of the bond and coupon for approval. As they had not heard whether their price for engraving the vignette of the reservoir had been accepted, they used a stock vignette of the Mexican eagle, which they thought made a very good looking bond and was the best vignette available, unless the municipio decided on the special vignetteABNC, letter manager Foreign Sales. Asunsolo made a few corrections but accepted the vignetteABNC letter José Asunsolo to ABNC, Mexico City, 10 January 1910. The bonds, in two books, were dispatched on 11 MarchABNC,letter 11 March 1910 to José Asúnsolo,Presidente Municipal of Chihuahua.

All were issued and none redeemed. On 22 February 1911 the Banco Central Mexicano sent 77 coupons (numbered between 3 and 481) to the Banco Minero to present to the ayuntamiento which were lost en route when the train was attacked and destroyedAMC, Fondo Revolución, Sección Justicia, Año 1911, caja 1, exp. 5.

On 29 October 1929 William J. McCafferty, the American Consul in Chihuahua, was instructed by the State Department, on behalf of Halsey, Stuart and Company of New York, to find out about these bonds and reported that the Chihuahua Treasurer General had told him that payments had been suspended because the State Legislature had not provided for the resumption of the service of the public debt of the State. The Treasurer General added that service would be resumed as soon as the economic condition of the Treasury permittedSD papers, 812.51. On 7 March 1932 the Comité Liquidador de los Antiguos Bancos de Emisión sent a memorandum to its legal departments that Chihuahua municipal bonds had no actual value as they were not paying any interestAGN, Comisión Monetaria/Antiguos Bancos de Emisión, caja 112. 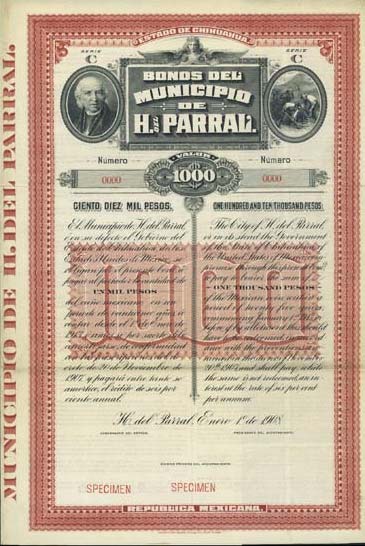 Between 1905 and 1907 the town council (ayuntamiento) of Hidalgo del Parral was authorised to issue three series of $1,000 bonds, paying 6% interest and amortizable over twenty-five years. The proceeds were to pay for the provision of water and drainage in the city.

The bonds were printed by the American Bank Note Company. They were signed by the Governor of the state and Presidente and Síndico Primero of the town council.

Series B was authorised 11 July 1907 and dated 15 September 1907. On 8 September Rodolfo Valles, the jefe político of Parral, ordered 200 bonds of this second issue from the American Bank Note Company. These were to be for $1,000 each, blue, Series B, numbered 1 to 200 and carry 59 coupons. They were to be signed by José María Sánchez, acting governor of Chihuahua, in place of Enrique C. Creel, and the Presidente and Sindico Primero of ParralABNC. The bonds were needed as soon as possible as George J. Ham, the President of the United States Banking Company, had bought the issue for his company and had the chance to make a quick turn over on the operation if the bonds were delivered in Parral by the middle of DecemberABNC letter Hendriks, resident agent to ABNC, 21 September 1907. The ABNC sent proofs on 11 November and these were approved on 27 NovemberABNC.

The 200 bonds of the second issue were dispatched on 10 January 1908ABNC. Until the bonds were issued, holders were given provisional certificates (certificados provisionales) signed by the Presidente and Sindico Primero and these certificates were exchanged for the definitive bonds on 21 February 1908Periódico Oficial, 12 March 1908.

The bonds carried interest of 6% and some were redeemed by six-monthly lotteries. We have records of the following redemptions:

On 3 December 1907, Valles ordered this third series, of 110 bonds, numbered 1 to 110, with 60 coupons, this time printed in red. Again the matter was urgent, as Valles wanted to place them on the market as soon as possible. Proofs were sent on 13 February 1908 and approved (with a minor alteration) on 21 FebruaryABNC.