There were two different offices that revalidated dos caritas in Durango. However, on 30 November 1914 the Jefatura de Hacienda, whilst restamping sábanas, returned a $5 Series C to the Recaudador de Contribuciones in Cuencamé without revalidation because it did not need it as ‘there were no forgeries in existence’ADUR, Sección de Hacienda p103.

This was in use by March 1915 since on 8 March Villa informed the Jefe de Hacienda that he had ordered the authorities to continue restamping all Chihuahua notes in the Administración del Timbre whilst cancelling any that turned out to be forgeriesVida Nueva, 9 March 1915. The branch was situated on Avenida Juárez.

On 14 July 1915 governor Saravia acknowleged that he had received from the Durango branch of the Banco del Estado de Chihuahua $20,000 that Villa had ordered to be sent to pay the troopsADUR, Fondo Secretaría General de Gobierno, Sección Siglo XIX, Serie Correspondencia, Subserie Revolución, gaveta 6, nombre 88

A round 31mm violet ‘SECRETARIA DE GOBIERNO - AGUASCALIENTES’ with eagle in centre.

On 11 November 1914 an Aguascalientes and a Mexico City newspaper reported that Villa had launched a new issue in Zacatecas, which had reached Aguascalientes and was causing concernEl Demócrata, 11 November 1914; El Sol, 11 November 1914. As there was no such issue, these might be references to the arrival of dos caritas in Aguascalientes, brought from ZacatecasHowever, earlier, on 6 October 1914, Marion Letchner, the U.S. consul in Chihuahua, had reported that Villa has ordered printed and dispatched from Chihuahua to Zacatecas immediately with all haste possible one million Mexican dollars under conditions suggesting its use in [suborning?] participants in the approaching Aguascalientes convention (SD papers, 812.5157/63 telegram to State Department) and this might be the source of the news item.

By March 1915 the dos caritas were being refused by post offices and railway stations, in accordance, they claimed, with superior orders. The governor, Benito Díaz, told the state offices under his authority to accept them and asked Francisco Escudero, the head of Hacienda y Fomento in Chihuahua, to instruct the federal offices to do the same.

The Carrancistas took Aguascalientes on 10 July 1915. 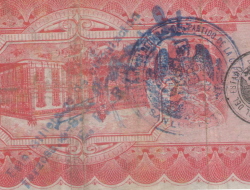 The Constitutionalists captured San Luis Potosí in July 1914. On 24 August the Prefectura Regional de la Capital, Coronel Ignacio Ramos, reminded the public that the two Villista issues were of forced circulation. The notes would be exchanged for other Constitutionalist currency at a later date if the authorities decided to withdraw them, but the public would be given sufficient noticePeriódico Oficial, 27 August 1914. However, Ramos made no mention of revalidation.

At the beginning of 1915 former President Eulalio Gutíerrez broke with the Conventionists, took part of the treasury and tried to install a national government in San Luis Potosí, with the support of Aguirre Benavides and the neighbouring governor of Hidalgo. On 1 February General Tomás Urbina and his Villistas took the city peacefully and General Emiliano Saravia was named governor.

The resello appears to imply that J. Rangel was E(l) P(refecto) R(egional) but a Juan Rangel had been a porter (conserje) in the Sección de Correspondencia y Archivo of the Tesorería General of Chihuahua in September 1914AMC and might have been the expert sent from Chihuahua. 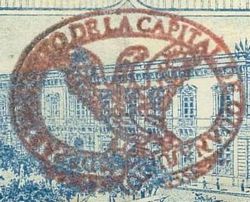 This resello is considered  counterfeit, and certainly is not part of a revalidation exercise, particularly since it is applied to a $1 note.

There are no direct references to resellos in Guanajuato but on 21 August 1914 the Gobernador and Comandante Militar, General Pablo A. de la Garza wrote to the Jefe de Hacienda to list the paper money that was of forced circulation, including the dos caritasCrispín Espinosa, Efemérides Guanajuatenses, Guanajuato, 1920. Similar decrees followed: for instance, on 1 September 1914 Enrique Campacos, the Administrador General de Rentas, listed the notes that his office would accept, including the sábanas, dos caritas and Ejército ConstitucionalistaEl Observador, 7 September 1914.

Tulancingo is the second-largest city in the state of Hidalgo.

It was captured by Convention forces under General J. Méndez on 2 May 1915. 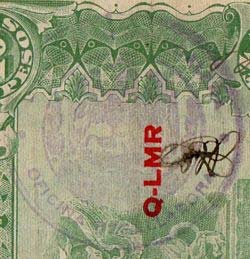 Zacatlán is a city in the northern part of the state of Puebla.

A red round seal with ‘BRIGADA OBREGON, SAN BLAS DIV.’ and R 1915 and a five-pointed star in the centre.

This resello looks and is a later forgery, done to enhance the appearance and value of the host note. It is found on a 10c Tesorería de la Federación notes issued by the Huertista forces in Guaymas, Sonora. As these Tesorería notes were immediately repudiated by the Constitutionalists, they would not have been restamped.