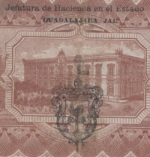 Guadalajara is the capital city of Jalisco, and was captured by Constitutionalists under Obregón on 8 July 1914. General Manuel M. Diéguez became the first Constitutionalist Governor and Military Commander.

Carranza’s decree enforcing the issues of the Constitutional states, including Chihuahua, and Diéguez’ own decree núm. 2 creating a fractional currency, issued in San Marcos a month earlier, were published in the first available official bulletin, El Estado de Jalisco, on 16 July 1914. In reply to numerous queries Diéguez issued circular núm. 2 on 30 July 1914, stating that the notes issued by the Cuerpo del Ejército del Noroeste and those issued, with Carranza’s approval, by the various Constitutionalist state governments were of forced circulationEl Reformador, 3 August 1914: Boletín Militar, 4 August 1914.

On 29 September 1914 Adolfo Ruiz, the Jefe de Hacienda, declared that in response to his query the Tesorería de la Nación had stated that Villa’s notes were obligatory (adoptación obligatoria). Banks and shops had been refusing to accept themBoletín Militar, 30 September 1914; México Libre, 30 September 1914.

In late November 1914 it was proposed to set up an office to exchange all the authorised state issues for Gobierno Provisional notes, starting with small amounts and increasing the sums when they had trained expertsEl Estado de Jalisco, 26 November 1914.

On 5 December 1914 Diéguez decreed that, because Chihuahua had issued far more paper money than Carranza had originally authorised, the sábanas would not be of forced circulation unless they had been restamped by the Secretaría de Hacienda y Crédito Público. Notes that did not have this resello would have to be restamped by the Jefatura de Hacienda in Guadalajara. The decree gave eight days for people in Guadalajara, San Pedro and Zapopan, and fifteen days for people in the rest of the state, to get their notes restampedEl Estado de Jalisco, 5 December 1914. Two days later a notice from A. Ruiz, the Jefe de Hacienda, set out the procedure for getting notes of five pesos or higher validated with a stamp that consisted of the state’s coat of arms and the title (membrete) of the Jefatura de Hacienda. Lower value notes could continue circulating until 15 December 1914 without a reselloEl Estado de Jalisco, 8 December 1914.

Diéguez was not popular with either the upper or the lower classes of society and many of the revolutionaries from Jalisco, headed by Julián C. Medina, joined Villa. On 12 December Diéguez was forced to move his capital to Ciudad Guzmán. Villa made a triumphant entry, and Medina became the (Conventionist) governor.

On 18 January 1915 Diéguez recaptured Guadalajara from the troops that Villa left behind: then Villa defeated Diéguez and reoccupied the city. Diéguez then retook the city in April 1915.

Though this resello dates from 7 December 1915 it must have continued to be used after Diéguez left Guadalajara on 12 December, either in the new capital of Ciudad Guzmán or once the Carrancistas returned to Guadalajara.

On 18 January 1915 the Constitutionalist forces of Generals Manuel Diéguez and Francisco Murguia recovered the city from the Villista generals Calixto Contreras and Julian C. Medina and the next day Carranza’s decree of 27 November disowning Villa and the Convention was printed on the front page. On 12 February Medina’s forces launched a drive westward from Irapuato, drove out Diéguez, and recaptured the city.

On 10 March Guilebaldo F. Romero, the interim Presidente Municipal of Guadalajara, declared all the notes issued by Villa to be of forced circulationLa República, 11 March 1915 but on 19 March he arranged for the sábanas to be restamped by the Jefatura de Hacienda and on 22 March another notice qualified his original notice about forced circulation, in respect of the sábanas, to those that had been so restampedLa República, 20 March 1915: El Estado de Jalisco, 23 March 1915. Sábanas without this resello could be refused.

On 11 April Emilio Ochoa arrived from Chihuahua to head a commission to review the notes of the two Chihuahua issues. To allay the general distrust, a newspaper reported that Ochoa was the only person in Guadalajara who had the key to distinguish the counterfeit sábanas and dos caritas and that the general public should therefore refrain from making mistaken judgements based on the size of signatures, the difference in colour of the seals, etc. According to the newspaper report the unmistakable indication of a forgery was minute but very noticeable to those who knew it. The commission could not reveal it under pain of death and so the public would have to contain itself for a short while. The whole report would appear to be propaganda rather than evidence that there really was some simple proof though Ochoa no doubt had better clarifications than the public and the key, or a list, of the control codes.

Ochoa was visiting the various tax offices, commercial houses, financial institutions and anyone who requested him to let them know which notes were genuine, and was to stay in Guadalajara as long as was necessaryLa República, 13 April 1915. However, as the Carrancistas returned within a few days he will not have been able to achieve much.

‘EJERCITO CONSTITUCIONALISTA - DIVISION DE OCCIDENTE’ in oval with eagle in centre and ‘PAGADURIA GENERAL’ beneath.

This is an example of the Constitutionalists using Villista currency to pay their troops, presumably in an area where there was insufficient alternative money. The Division de Occidente was led by General Diéguez.

‘Jefatura de Hacienda en el Estado’ in semi-circle with ‘CIUDAD GUZMAN, JAL.’ and the coat-of-arms of Guadalajara below.

This resello was a result of Diéguez’s decree of 5 December 1914. When Diéguez was forced to move his state capital to Ciudad Guzmán on 12 December 1914 the Jefatura de Hacienda will have used this modified resello. It is unknown whether it continued in use after Diéguez moved the capital back to Guadalajara.