After the split with Carranza the Villista Felipe Angeles captured San Pedro de las Colonias and advanced on Saltillo while Emilio Madero advanced towards Parras. Angeles entered Monterrey on 15 January 1915 to hold it against Pablo González. The Chihuahua notes (and the revalidated Gobierno Provisional) drove out the previous Constitutionalist issues.

In March 1915 de la Garza suggested putting R. A. Sepúlveda in charge of changing notes in Monterrey and Saltillo, where Carrancista currency abounded, but Vargas replied that there were experts (revisadores y canjeadores de billetes) from the Tesorería in both cities. Raúl Madero had said that $10,000 would be enough to effect the change in MonterreyLG papers, 3-H-22, letter from Vargas, Chihuahua, to de la Garza, El Paso, 4 March 1915.

Villa arrived on 15 March 1915 and in his usual manner ordered that money should be distributed to those in needJosé P. Saldaña, Episodios Contemporanéos, Monterrey, 1955.

When Villa evacuated the city on 19 May 1915 the value of his currency plummeted. 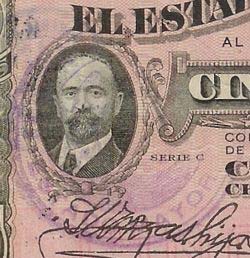 Apparently a dealer arrived in Villa Aldama and knew an ex-revolucionary who had worked at the town hall during the revolution. He sold the dealer a safe that he could not open because he had lost the combination. The dealer took the safe to Monterrey and opened it and found 11 or 12 notes with this reselloinformation from Gil Gómez.

A round black 43.5mm seal with ‘JEFATURA DE ARMAS - SALTILLO, COAH.’ and eagle in centre with signature of Antonio Ramos, El Mayor

Saltillo, the capital of Coahuila, is located 400 kilometres south of the United States border and 90 kilometres west of Monterrey, Nuevo León.

On 22 March 1913, Carranza and his army were defeated at Saltillo and forced to evacuate the city. As the seat of rebellion, it was a psychologically important Federal victory which denied ex-governor Carranza his home base. Saltillo remained in Federal hands until its liberation by elements of the División del Norte under Villa on 20 May 1914. 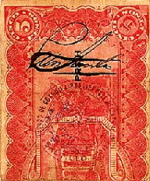 In March 1915 de la Garza suggested putting R. A. Sepúlveda in charge of changing notes in Monterrey and Saltillo, where Carrancista currency abounded, but Vargas replied that there were experts (revisadores y canjeadores de billetes) from the Tesorería in both citiesLG papers, 3-H-22, letter from Vargas, Chihuahua, to de la Garza, El Paso, 4 March 1915.

The only reference to overprinting from Saltillo is an instruction, dated 22 June 1915, from the Carrancista Secretario General de Gobierno to the Presidente Municipal to collect in the treasury all the legal money that had been marked or restamped by the rebels when they occupied the town together with any prohibited currency. The former was to be exchanged for other legal notesAMS, fondo Presidencia Municipal, caja 158/1, legajo 26, exp.20, letter from Secretario General de Gobierno to Presidente Municipal, Saltillo, 22 June 1915.

A violet oval stamp with ‘Tesoreria Municipal, … Tamaulipas’ and date.

During the campaign against the Villistas in early 1915 the forces of Constitutionalist General Rafael Cepeda were cut off from the rest of Pablo González’s forces and could not receive supplies, including money to pay his troops. He was empowered to use dos caritas, validated with his signature, to cover his costs, on the understanding that only these signed notes would be allowed to circulate.

On 20 September 1915 Pablo González wrote to the Jefaturas de Hacienda in Saltillo and Monterrey asking them to exchange the notes that Cepeda’s forces held. Cepeda wrote to thank González on 22 November 1915APGG, leg. 2 bis, exp. 159.