The Ejército Constitucionalista notes were put into circulation throughout the northern states from Sonora to Tamaulipas. They were legal tender throughout the Constitutionalist territory and repeatedly listed in proclamations on forced circulation. However, they seem to have fallen out of favour in the Villa-dominated areas and in February 1915 when Lazaro de la Garza requested 300,000 Ejército Constitucionalista Vargas reported that there were none in Chihuahua, Durango, Zacatecas or AguascalientesLG Papers L3-H-6, telegram Vargas, Chihuahua, to de la Garza, Ciudad Juárez, 6 February 1915. Though El Radical reported counterfeit $10 notes in Chihuahua in January 1915 (El Radical, 6 January 1915).

On 11 February 1915 José María Maytorena, the governor of Sonora, in Nogales, issued circular núm. 1 with instructions for customs officials. Everyone entering the country was to be asked if they were bringing in paper currency. If the person answered no, they were to be allowed to pass, unless the official suspected they were lying: in which case they were to be searched. If they were found to be carrying legitimate currency, it was to be confiscated: if they were found to be carrying any counterfeit notes they were to be consigned to the nearest political authority. Whenever anyone handed in currency for inspection, it was to be checked by the official. Good notes were to be returned, marked with the official’s initials, whilst counterfeit notes were to be punch-stamped (with holes at least 1cm in diameter) through the serial numbers, stamped FALSO in indelible ink and returned. Circular núm. 2, of 12 February 1915, laid down similar regulations for shipping agents such as Wells Fargo and CompanyAGHES, Fondo Oficialidad Mayor, tomo 3024.

Half of the relatively few validations that are known on Ejército Constitucionalista notes come from Sonora and date from the first half of 1915. These resellos were:

A 41mm round black stamp with ‘PRESIDENCIA MUNICIPAL DE CANANEA, SONORA, MEX.’ and eagle in centre. 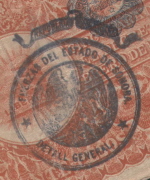 A large black round seal with eagle in centre and inscription ‘FUERZAS DEL ESTADO DE SONORA. DETALL GENERAL’ around with a ribbon with ‘REPUBLICA MEXICANA’ above.

This stamp was used in Nogales from March 1915Boletín Militar, 17 December 1915. On 16 March 1915 Governor Maytorena issued a notice informing the public that he had commissioned Francisco J. Cazebud to oversee the revision and revalidation of notes. Therefore notes sealed until the previous day with the “Administración de la Aduana de Nogales, Sonora” and the initials “R. M.” were valid, and henceforth notes would have a “República Mexicana. Fuerzas del Estado de Sonora. Detalle General” seal and the initials “F. J. C.”Prensa, San Antonio, 19 March 1915. 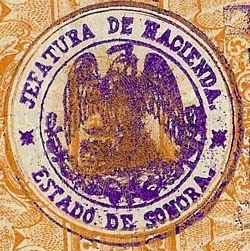 A violet round 38mm seal with ‘JEFATURA DE HACIENDA. ESTADO DE SONORA’ and eagle in centre. 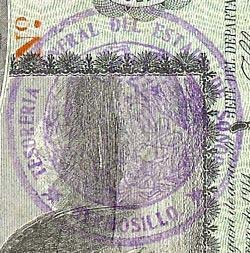 A 39mm round seal with ‘TESORERIA GENERAL DEL ESTADO DE SONORA - HERMOSILLO’ around an eagle. The stamp was used with black and violet ink.

A 44mm black oval stamp with legend ‘ADUANA MARITIMA DE GUAYMAS, ADMINISTRACION’ with date in centre. Known dates range from [ ] to [ ] and the stamp was used until 15 March 1915.

The custom house in Guaymas was an old barracks, dating from the first days of the port, on the quay where the statue to General Yánez now standsAlfonso Iberri, El Viejo Guaymas, Mexico, 1952.

We know that by May 1915 notes were being restamped in the Municipal Treasury in Guaymas so this resello possibly comes from that building.

We have some other references to resellos (or their lack) in Sonora. On 15 May 1915 the authorities in Rayón complained that 70% of the notes in circulation were unstamped Monclova and Ejército Constitucionalista as it was impossible for most people to get their currency revalidated. They had just heard that although the government had for some time been restamping notes in the Tesorería General del Estado and the Customs at Nogales(?) (de esa población) it was now suspending the operation. This would render most of the money in circulation useless. On 27 May the state treasurer confirmed that what Rayón said was true and admitted that the same problem occurred in every town that was not on the rail network. He only had two people employed on restamping and all he could suggest was that Rayón should send someone with all their notes to the Tesorería General where they would exchange the Monclova and restamp the restAGHES, Fondo Oficialidad Mayor, tomo.

Resellos from other states were:

The rebels captured La Paz in March 1914 and as soon as Miguel L. Cornejo was installed as Constitutionalist Jefe Político, Monclova and Ejército Constitucionalista notes began to circulate. But the quantities sent over were not enough, so Carranza authorized Cornejo to issue notes of $5, $10 and $20 and vales of 5c, 10c and 50c.

On [ ] Urbano Angulo ruled that the compulsory issue in the District was that of the Ejército Constitucionalista but because businesses and the general public possessed large quantities of other types of notes, such as the Monclova, dos caras, Brigada de Sinaloa, Estado de Sonora and Cornejo, he had decided to permit their circulation, with the resello of the Jefatura Política or corresponding Presidencia Municipal, with the exception of the Villista notes ABCS, Gobernación, exp 150, c 642. This does not, however, mean that Ejército Constitucionalista notes needed to be revalidated. 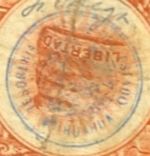 Two Turkish citizens, Salamon Nigri and Rafael Fereze, were executed at Torreón in March 1915 for possessing counterfeit Villa money. Nigri’s brother told the El Paso Herald, "My brother and I have been engaged in business in Torreón for some years. Recently, of course, all of our business has been transacted in Villa money. … on Monday a woman came into the store and bought some goods and paid 1000 pesos for them. My brother immediately took the money to the cuartel and there had it stamped. He was told that it was good. Early Tuesday morning, however, soldiers came to the store and arrested my brother and Mr. Fereze. The trial, if there was one, must have been brief, as they were executed the same afternoon. As I have said, the money had previously been declared goodEl Paso Herald, 1 April 1915."

Another newspaper item, probably from the same Associated Press report, said that the 1,000 pesos was of "eagle" moneyThe Elkhart Daily Review, 2 April 1915.

Within the Carranzista area, on 27 September 1915 the Constitutionalist Secretario de Hacienda issued a circular (núm. 38) that ‘to protect the public against numerous falsification of notes of the Gobierno Provisional de Mexico, issued in Veracruz, and of the notes of the Ejército Constitucionalista, this Secretaría, by resolution of the Primer Jefe, has decreed that from the thirtieth of the present month all the legitimate notes are to be restamped in the Currency Office (Oficina Impresora de Billetes) and in the Stamps Printing Office (Oficina Impresora de Estampillas) in Mexico City, with the seals (sellos) which they will produce as time permits’. This led to revalidations in Veracruz, Mexico City, Guadalajara and Querétaro. On 1 December, however, the Secretaría de Hacienda in circular 48 had to allow that genuine Ejército Constitucionalista notes were of forced circulation even though they lacked the requisite resello. 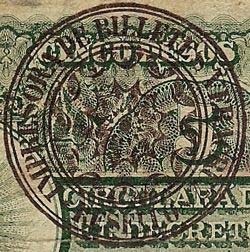 This resello was consequent upon Carranza’s circular of 27 September 1915 mentioned above. 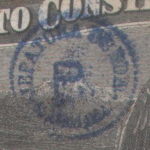 A round black or green 22mm ‘JEFATURA DE HDA. – GUADALAJARA’ with ‘P’ in centre

By December 1915 many businesses in Guadalajara were refusing any Ejército Constitucionalista that had not been restamped in accordance with the 27 September circular. In a newspaper interview Gabriel Vargas, the Jefe de Hacienda, reminded people that according to the later circular the genuine notes were still of forced circulation even though they lacked the requisite reselloBoletin Militar, 17 December 1915.

In early March 1916 Carlos García Mares arrived with instructions from the Secretaría de Hacienda to review the notes in circulation. García Mares intended to establish a special office to stamp notes which were of legal circulation and not counterfeit and to decommission the restEl Presente, 24 March 1916.

This was presumably used until 1 April 1916 when the Jefe de Hacienda F. Mugica Perez announced that they were discontinuing the provisional stamp (resello provisional) that they had been applying to genuine Ejército Constitucionalista, although the offices for checking notes would remain open. The reason for stopping the restamping was that Carranza’s circular núm. 48 of 1 December 1915 had reiterated that genuine notes were of forced circulation even though they lacked resellos and so had made restamping redundantLa Sombra de Arteaga, [ ].

This is not really a revalidation but must refer to a final decommissioning.

On 21 March 1916 large quantities of bogus $5 and $10 Ejército Constitucionalista (and Gobierno Provisional) appeared in Guanajuato. The Tesorería General restamped the genuine notes and decommissioned the forgeries, causing a great deal of distress to their holders, especially those from the working classesCrispín Espinosa, Efemérides Guanajuatenses, Guanajuato, 1917. It is not known what resello was used.

There are also some private marks.

For overprints dealing with withdrawal from circulation see The withdrawal of the Ejército Constitucionalista notes.