The first Banco de Chihuahua had stopped functioning before the Banco Mexicano appeared in early 1878La Patria, Mexico City, 23 April 1878. Confirmation of this is that the bank was not in operation in August 1883 ('There are three banking houses and you can get exchange on any city nearly in the world. There is the Bank of Mexico, the Bank of MacManus and Sons, and of Creel and Co. These last two are American, though Creel is by marriage to the daughter of Gov. Terrazas identified with the native element.' El Paso Herald, 5 August 1883) nor was it in existence on 31 July, 1882 (El Norte, 5 July 1900) but on 19 December 1883 Müller was given permission to re-establish his bank and issue the 300,000 pesos. In the same decree the bank was also given permission to circulate another 500,000 pesos, this time payable on sight in Mexican silver pesos (en pesos de plata del cuño mexicano). The first issue had to be in circulation within two months, and the second issue within eight months or the concession would lapse. Such notes as were to be issued had to carry the signature of the Administrador General de Rentas del Estado or an indication that they had been registered in a book established in his office to record numbers and denominationsPeriódico Oficial, 5 January 1884. So the bank should have issued notes within two months of December 1883 but it is not included in González’s authorisation to issue fractional currency during the nickel crisisPeriódico Oficial, 7 May 1884, had not started by July 1884Memoria de la Secretaría de Hacienda correspondiente al ejercicio fiscal de 1884 á 1885, Mexico, 1885 and is not mentioned in a newspaper article on Chihuahuan banks in August 1884El Tiempo, Mexico City, 19 August 1884.

On 23 August 1884 a newspaper reported that the Banco de Chihuahua had been granted an extension of eighteen months to the period granted to existing banks to comply with the 1884 Código de ComercioEl Foro, 23 August 1884. This was at the time that the Chihuahuan elite were lobbying against the Act and probably referred to the requirement for banks to withdraw their notes unless they subjected themselves to the Act.

Since it is inconceivable that the bank put more than 300,000 pesos into circulation (the highest amount it achieved in 1890 was $158,000) there would have been no need for another series (or overprint) with the revised legend ‘en pesos de plata del cuño mexicano’. Indeed, there does not seem to have been any notes of this first isue with the seal or some other indication of the Administrador de Rentas, as specified by the terms of the 1883 decree.

The 25c is known only as a proof and not as an issued note.

On 15 December 1888, in accordance with the new federal Code, the concession for a Banco de Chihuahua was renegotiated with the Secretaría de Hacienda y Crédito Público. Lauro Carrillo represented the bank and so the application was probably from the anti-Terrazas Pacheco faction. This will have been that faction’s second attempt to acquire a bank after the failure of the first Banco Minero Chihuahuense.

The contract also stated that the existing issue of silver notes (moneda de plata) was to be replaced by a new issue, with a different design and signed by the Interventor with the bank given one year to carry out the substitution. However, the concession was drafted in a standard format, so we do not have to assume that by this time the bank had in circulation both (a) notes de moneda corriente, pagaderos en plata con 8 por ciento de descuento to be withdrawn by 30 June 1889; and (b) notes de moneda de plata to be withdrawn by 15 December 1889. Only the former are known and it seems that the latter were not needed.

Once the new concession had been granted a new company was established by Carlos Pacheco, Lauro Carrillo, Félix Francisco Maceyraironic that Maceyra had criticised the original Banco de Chihuahua, Agustín Becerra, José Valenzuela and Hubert Waithman. The company’s capital was composed of ten founder shares of $50,000 each, of which 40% was paid up: Carlos Pacheco took one share; Lauro Carrillo two (one for transferring the concession); Félix Francisco Maceyra two; Agustín Becerra one; José Valenzuela one; Hubert Waithman one; Celso González one and Manuel de Herrera one. Félix Francisco Maceyra was appointed President and Celso González Accountant (Contador).

The bank was thus owned by the anti-Terrazas faction known as the circlo Pachequista. This group had the support of President Díaz and held power in Chihuahua from 1884 until 1892 with Pacheco as governor from 1884 to 1888 and Carrillo as interim governor in 1887 and constitutional governor from 1888 until 1892In the 1886 state legislature the pro-Pacheco deputies included Pedro Acosta y Ortiz, Lorenzo J. Arellano, Pedro Cabajal, Gaspar Sales, Tomás Dozal y Hermosillo, Antonio Prieto and Lauro Carrillo whilst the Terracistas included Enrique de la Garza, Felipe Acosta, Francisco A Muñoz, Leonardo Siqueros, Matías Balderrama, Gabriel Aguirre and Rómulo Jaurrieta. Other members of the group were Félix Francisco Maceyra from Chihuahua and the González and Herrera families from Guerrero who were all included in the share allotment. 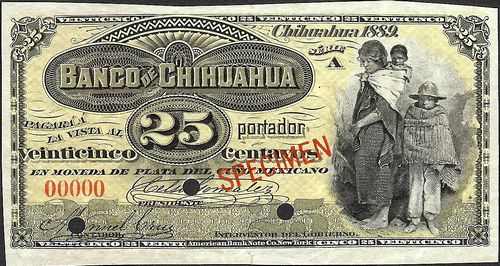 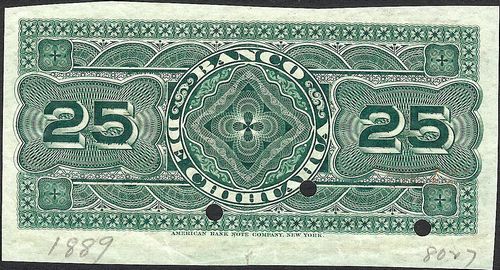 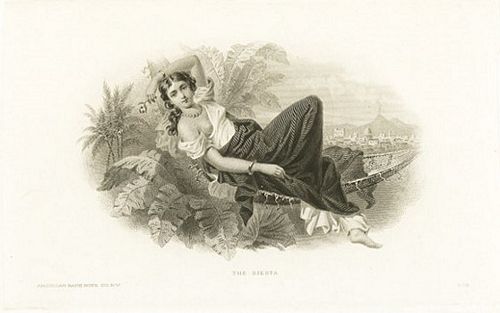 The American Bank Note Company produced specimens of the 25c and 50c notes with a lighter background in July 1889 but these did not gain approvalABNC.

The 25c and 50c issued notes have a small control number in the left bottomhand (50c) or right bottomhand corner (25c). The number is either no number, 2, 3 or 4 and refer to the four different plates (of either 18 25c notes or 10 50c notes) that the ABNC produced.

All denominations are series A. The notes carry the printed signatures of Celso González as President and Manuel Cruz as Accountant (Contador) and the hand signature of Miguel Ahumada as Interventor.

Other people associated with the bank included:

Agustín Becerra was a founding shareholder.

Mauro Candano was contador from November 1891 until February 1895. Born in 1855, Candano had both a military and political career. He married Aurelia González from Guerrero and was a member of the Carrillo faction, serving as interim governor for Lauro Carrillo in 1889. From 1891 until 1895 he was contador of the Banco de Chihuahua and then in 1896 was contador of the Banco MejicanoFrancisco Almada, Gobernadores de Chihuahua, Chihuahua, 1980 but is he confusing this with the Banco de Chihuahua? but went to Mexico City in 1897. He later returned to Chihuahua, took part in the Ciudadela coup in 1913 and thereafter supported Huerta (though he interceded on behalf of some of the regime's victims). He died in 1938.

Lauro Carrillo was born at Sahuaripa, Sonora on 2 April 1849 though his family soon moved to Morís, Chihuahua. He worked in mining, and was elected to the state legislature in 1879. He served several terms as deputy or senator, and was substitute governor for General Pacheco in 1887, and constitutional governor in 1888. However, he was opposed by the Terrazas and blamed for mishandling the peasant rebellion at Tomóchic and in 1892 President Díaz replaced him with the compromise candidate, Ahumada. He died in El Paso on 6 March 1910. 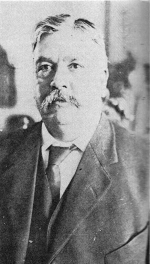 Abraham González: Another member of the distinguished Guerrero family, González was a man of learning who spoke English fluently and was reasonably affluent, owning farmlands on the outskirts of Ciudad Guerrero. He served as cashier (cajero) of the bank and distinguished himself by his hard work and honesty. As a relation of Celso, he was an opponent of the Terrazas and lost his job when the latter took over the bank. To compound his difficulty, the lands he owned yielded only modest profits, while foreign corporations blocked his attempts to invest in mining. By 1910 his once promising career had ended in a series of minor jobs, including cattle buyer for an American company, in which role he met Francisco Villa. González became an advocate of reform because of his hatred of the Terrazas family as represented by the government of Enrique Creel. After Madero’s victory at Ciudad Juárez he was named interim governor and won election in 1910, though he took a sabbatical to serve as Madero’s Secretario de Gobernación. In 1912 he returned to take control in Chihuahua, but had to flee Orozco’s rebellion. He returned again after Orozco was defeated but on 22 February 1913 was arrested on Huerta’s orders, and assassinated on 7 March whilst being transported to Mexico City. Villa idolized González and put his portrait on the dos caritas.

Jesús José González was cajero in April 1895 and contador from March 1895 until the end.

José Valenzuela was a founding shareholder. The 1884 concession was signed by the two state deputies Manuel de Herrera and José Valenzuela. Valenzuela signed the February 1892 balance sheet on behalf of the president and was made president himself in March 1896.

In May 1890 the bank’s capital was reorganised into 5,000 shares of $10 eachDiario del Hogar, 14 May 1890. In November 1890 Carrillo, then Governor of the state, accompanied by his administrative entourage, made a gira (political campaign trek) through the Sierra Madre. As well as campaign promises Carrillo meant to introduce the Banco de Chihuahua currency and so drive out the notes issued by the rival Banco Minero, whose Terrazas were hoping to recapture the state house in the gubernatorial elections of 1892.

Just as the Guerrero group had been unable to sustain the original Banco Minero Chihuahuense, so it ran into trouble with the Banco de Chihuahua. It was threatened by its diminishing capital and the impending Ley General de Instituciones de Crédito. By May 1896 the bank’s notes were no longer being accepted in various parts of the state, and in view of the general alarm and the threat of a catastrophic collapse, the state governor and bank manager, in agreement with the Secretaría de Hacienda and national government, asked the Banco Minero for a loan of 150,000 pesos to overcome the crisis and close the bank without the scandal and dangers of a bankruptcy. At an extraordinary meeting of the Banco Minero on 17 May 1896 it agreed to the loanAGN, Antiguos Bancos de Emisión, Actas del Banco Minero, libro 1, 28 February 1888 to 5 January 1899. A letter from the interventor, Miguel Ahumada, to Limantour, dated 27 May 1896, gives slightly different dates. Ahumada says he made his regular visit on 16 May and then an unexpected visit on 23 May. Caught unaware, the bank was unable to show that it had the required funds to back up its notes, so Ahumada warned the directors of their responsibilities, and arranged the liquidation and takeover (CEHM, Colección José Y. Limantour, carpeta 1, legajo 176). The Banco de Chihuahua went into voluntary liquidation on 4 July 1896 with the Banco Minero in charge of redeeming the notes still in circulation, a total of some 99,577 pesos.