A decade of abuse 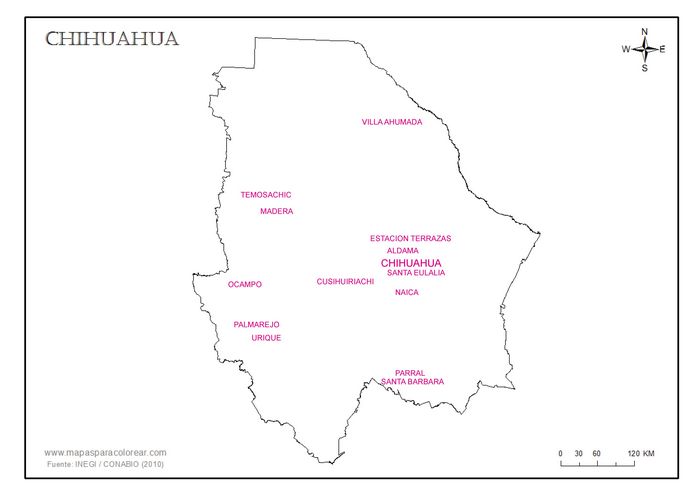 On 30 November 1889 President Porfirio Díaz banned the use of tokens and similar devices after 1 July 1890 and the monetary reforms of 1905 again prohibited their use and supposedly led to their withdrawal but thereafter there were numerous examples of private issues. During the first decade of the new century Silvestre Terrazas' newspaper El Correo de Chihuahua constantly campaigned against the practice of company stores (tiendas de raya) and the state government on several occasions, on 19 June 1905Periódico Oficial, Año XXV, Núm. 38, 22 June 1905, on 18 September 1908Periódico Oficial, , 20 September 1908; Chihuahua Enterprise, 26 September 1908 and 30 March 1909Periódico Oficial, , 8 April 1909 issued circulars to the jefes políticos instructing them be more vigilant and strict in seeing that corporations and business concerns did not violate the law and to report infringements to the governor.

In 1905 a company was fined 500 pesos for using scrip and El Correo de Chihuahua warned other companies to give up the practice. Some firms, it said, issued boletos because of a shortage of fractional currency whilst others were not content with that but also imposed a charge of 10 to 15 per cent to cash their scripEl Correo de Chihuahua, 2 December 1905. In 1908 the Chihuahua Enterprise reported that some companies had recently violated the law and that the federal government had fined them to the limitChihuahua Enterprise, 26 September 1908.

Although apart from La República (infra) no notes remain from this period there are several other references.

In October 1911 it was reported that Luis Terrazas was paying the workers on his hacienda at Villa Ahumada fifty centavos a day, not in cash but in valesEl Correo de Chihuahua, 10 October 1911. Worthington, op. cit., lists a trade token for the Hacienda de Encinillas: TIENDA DE RAYA / CHIHUAHUA / MEX. / ENCINILLAS BUENO POR / $1.00 / MERCANCIAS.

In March 1908 the Chihuahua weekly, El Universo, reported on the dire situation in Madera, where work had dried up. Even worse was that the company paid its workers with vales, which were used to buy goods in the company’s stores at exorbitant prices. If the workers managed to exchange their vales for hard cash, they only received 50% of their nominal value. Many of the workers had been tempted to Madera by the thought of the good wages that were paid there, but now found that they had to stay because they lacked the means to leave. El Universo thought that, as payment in vales was illegal, the authorities should intervene and put a stop to the practiceEl Universo, 22 March 1908.

In August 1908 the company closed down all its operations and posted a notice that it would pay only 20% of the wages it owed, in cheques drawn on the Banco de Sonora in Ciudad Chihuahua. Troops were called in to counter any disturbancesEl Correo de Chihuahua, 3 August 1908. In September 1908 President Díaz imposed on the Sierra Madre Land Lumber Company a fine for issuing vales ó boletos similar to that imposed on the Greene Gold Silver Company (infra). The company had put more than $20,000 in these boletos into circulationLa Patria, 19 September 1908. Presumably this refers to the same company,

On 14 June 1911 the employees of the Compañia de Madera petitioned Governor González over the system of chits (boletos or tiquetes) usable only in the tienda de raya or butcher's shop, the high prices, poor quality and lack of goods. Payment had originally been made on a daily basis but had changed to monthly because of the disruption to railway traffic. Now that the trains had resumed, the company had not reverted to the earlier practice because of the benefits of the new systemEl Correo de Chihuahua, 24 June 1911. Within a few days the company and its employees resolved their differences: the management began paying wages in cash, daily instead of weekly in the workshops and weekly instead of monthly in the sawmills, and reduced prices in the company store to match those in the capitalEl Correo de Chihuahua, 20 June 1911: 26 June 1911: 15 July 1911. Almada (Vida, proceso y muerte de Abraham González, Mexico, 1967) mentions a a strike in July 1911 at the Anglo-American Madera Lumber Company, because of the tienda de raya and the fact that the company had given the Chinese a monopoly over the sale of fruit and vegetables. González gave instructions that the company cover their wages in cash (en efectivo), and allow employees to shop at the tienda de raya, if it was in their interests, or at any of the other establishments. This might refer to the same dispute.

This company was one of those owned by the American entrepreneur William Cornell Greene. Greene received his first concessions in 1902 and in March 1906 was granted a concession to establish a processing plant in Concheño and to run a railway from Guerrero to Rayón and a road from Temósachic to Concheño. In April 1907 the company was granted a further concession for mines, processing plants, electric plants, roads, sueldos de empleados and tiendas de raya in the districts of Galeana, Guerrero and Rayón.

AlmadaFrancisco R. Almada, Apuntes Históricos del Cantón Rayón, Chihuahua, 1943 states that after Greene was bankrupted in 1908 the company had trouble payings its wages. After the local jefe político, Profesor José María Rentería, reconciled the parties, the company paid a percentage of the outstanding wages in cash and the rest in goods from the tienda de raya, which third parties bought off the workers for three-quarters of their value.

No notes are known to exist though specimens for coupons used in the tienda de raya of Greene's Cananea Consolidated Copper Company in neighbouring Sonora are known (see Cananea).

Again in September 1908 President Díaz imposed a fine of $250 on the Chihuahua Lumber Company for using vales-tarjetas to pay the workers in the sawmill at Cuesta PrietaEl Tiempo, Año XXVI, Núm. [ ]74, 25 September 1908.

In January 1909 the negociación minera de Rio Tinto, Estación Terrazas, about 60 kilometres from the state capital, was reported to be paying their workers with valesEl Correo de Chihuahua, 6 January 1909. Two months later another newspaper claimed that more than 200 workers at the mine were victims of the predations of the owner of the tienda de raya, who operated with boletas during the month and charged extortionate prices so that on payday the workers did not receive a centavo but remained in debtEl Pais, Mexico, 20 March 1909.

In 1908 at the foreign-owned La Gloria mine, in Placer de Santo Domingo, Aldama, about 60 kilometres north-east of Ciudad Chihuahua, the supervisor paid the workers with chits (cartas ordenes) drawn on an American, resident in the Hotel Robinson, Chihuahua. These chits did not carry the legally required counterstamp (marca) El Correo de Chihuahua, 11 July 1908.

El Correo de Chihuahua originally claimed that at the Las Plomosas mine, Aldama, they had the same system of chits as La Gloria and, because of the economic crisis, workers had not been paid for three monthsEl Correo de Chihuahua, 11 July 1908. However, a fortnight later the paper ran a retraction: it said that it had been informed that the miners were well treated and well paid, not in vales but in cash, and were not obliged to make their purchases in the company’s tienda de rayaEl Correo de Chihuahua, 26 July 1908. So that’s alright, then.

In 1906 three hundred miners in Santa Eulalia petitioned the state government to stop their companies giving them chits (vales) to be used in specified stores because of the high prices that these stores charged. By September, as a result, they no longer had to buy their goods at the tiendas de raya and their lifestyle improved as a consequenceEl Correo de Chihuahua, 10 September 1906.

An American company was organised in Naica about 1903 and built its own narrow gauge railway from the Conchos station to the mine 20 miles away. In July 1911 the miners went on strike against the system of tickets (boletos) and deductions for non-existent medical facilities. The strike was settled through the intervention of Governor Abraham GonzálezEl Correo de Chihuahua, 24 June 1911: 16 July 1911.

The Cusi Mexicana Mining Company was organised on 27 July 1911 and in 1912 bought the properties that had originally belonged to Herrera, González, Salazar y CompañiaThe properties had passed from Herrera, González, Salazar y Compañía to the Cusi Silver Mining Company in 1880, then to the don Enrique Mining Company (major shareholder Enrique Müller) in 1890, then Banco Minero in 1896 and finally the Helena Mining Company. AlmadaFrancisco Almada, Resumen de Historia del Estado de Chihuahua, Mexico, 1955. Worthington, op. cit., lists tokens: TIENDA DE RAYA / M. Co. / COSIHUIRIACHIC 1880 / 2 / REALES EN EFECTOS and the same design for 1/4, 1/2, 1 and 4 reales and 1 peso. mentions it as one of the companies that issued vales. 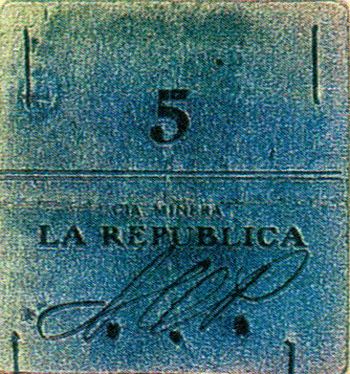 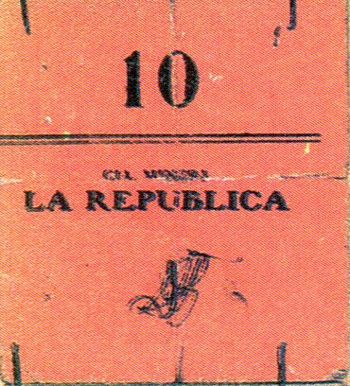 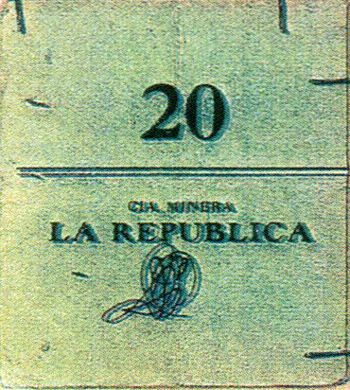 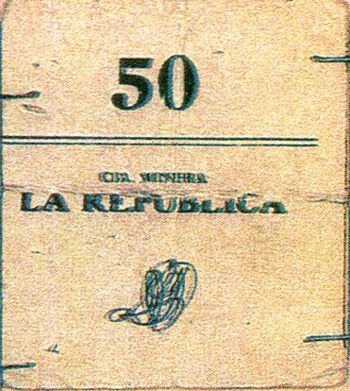 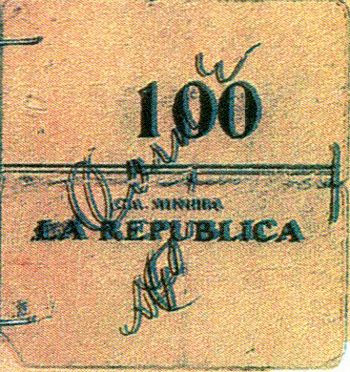 La República, one of the principal mines in OcampoThe company’s general offices were established in El Paso, Texas: J. J. Mundy was President, B. F. Darbyshire Secretary and M. B. Parker General Manager., issued vouchers in at least five denominations – five (blue), ten (orange), twenty (green), fifty (beige) and one hundred (ochre) centavos. The 5c and 100c measure 60mm x 57mm whilst the other three values measure 64mm x 58mm. There are three different intials and the $1 note has 'carne' written on it. 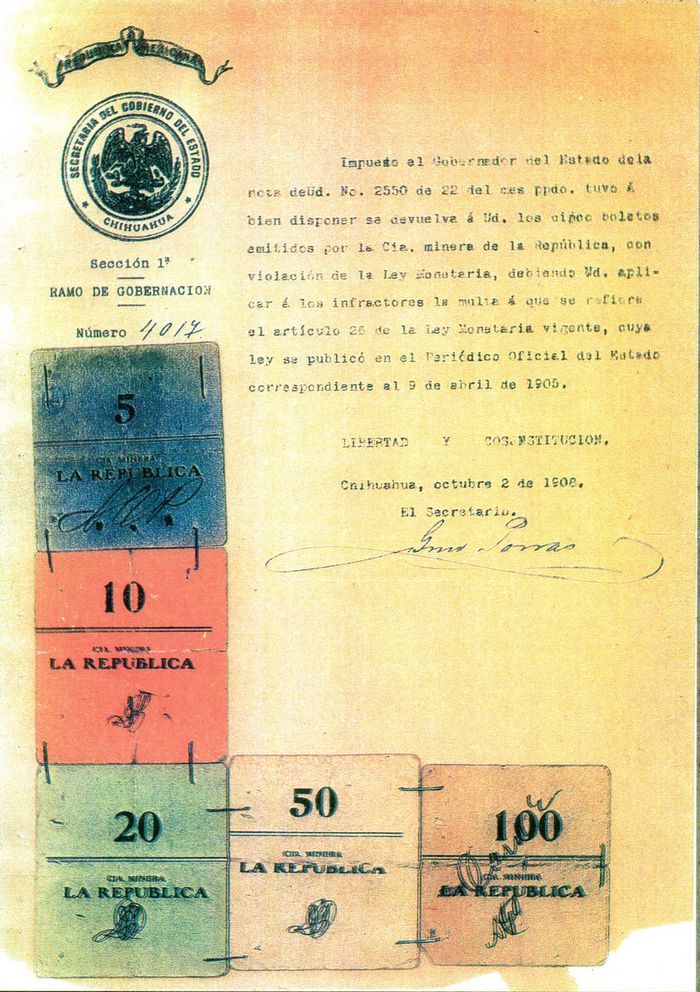 In 1908 the company was reported to the state government and on 2 October 1908 Secretario Guillermo Porras told the local authorities to apply the fine set by article 26 of the 1905 Monetary LawLuis Gómez Wulschner, Pre-Revolutionary vouchers of the mining company “La Republica”. A Numismatic Discovery in USMexNA Journal , September 2004.

In his report on local administration in 1908 the jefe político of Ocampo, José María Rentería, reported that various mining and mercantile companies had issued scrip (vales, bilimbiques y boletos) in place of using legal tender and that he had imposed some fines to halt the practiceFrancisco Almada, Apuntes Historicos del cantón Rayón, Mexico, 1943.

In November 1905 it was reported that the Palmarejo mine had abandoned the practice of paying with coupons for meat (boletos de 400 gramos carne). If workers earned 50 centavos they were now paid in cash, whereas previously they had to earn five pesos before they were paid in cash. Some said that Don Reinaldo (Almada?) had stopped the practice, whilst others attributed it to the new managerEl Correo de Chihuahua, 9 November 1905.

In August 1911 a correspondent, Federico Aguilar, reported to El Correo de Chihuahua on the situation in Urique. The mine there had been under the control of an American, H. S. Durand, who paid workers in cash, but in April 1911 A. S. Monge, an associate of Becerra, the local cacique, had bought the mine and began paying in merchandise, using a system of vales or boletos. The correspondent hoped that once governor Abraham González learnt of this, he would put a stop to such illegal practicesEl Correo de Chihuahua, 20 August 1911.

In Santa Barbara, the Compañía de Minas de Tecolotes y Anexas maintained production despite the economic crisis and did not have either its own tienda de raya or arrangement with any casa comercial but paid regularly on paydays in cash. However, a certain employee of the company did make loans to the workers (at a interest rate of 10% per week) and issued vales for his grocery store, cantina and billiard palour. Anyone who did not accept his vales lost their jobEl Correo de Chihuahua, 11 February 1909: El Diario, 15 February 1909.

From 1907 many of the mines in Minas Nuevas (now Villa Escobedo), slightly north of Hidalgo del Parral, closed, with the exception of the “Veta Grande y Anexas”. In 1909 this mine was late in paying, and gave out boletos to be to be used in the expensive tienda de raya. Since the workers were receiving only a few centavos on paydays, the other shops in the area suffered and many closed, to the detriment of the local tax baseEl Correo de Chihuahua, 2 March 1909.

On 5 April 1912 the Orozquistas attacked the town of Parral. The Parral and Durango Railroad paid all the wages due for March in cash, being obliged to resort to many subterfuges in order to obtain and pay out the money but, as there were no longer any banking facilities in the town, it posted up notices[text needed] that wages from 1 April would be paid only by orders convertible into cash when normal conditions returned, or in merchandise. All the men without exception agreed to stay onSD papers, 812.00/3706 letter 8 April 1912.