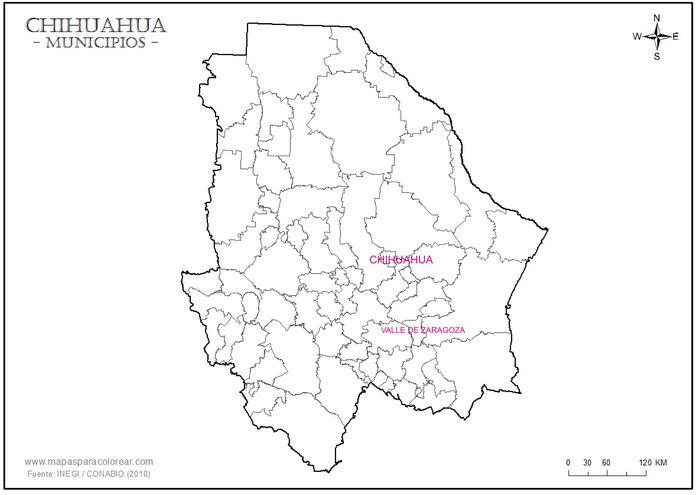 Valle de Zaragoza is a municipality 70 kilometres north of Hidalgo del Parral. Founded in 1866, the Bellavista yarn and fabric manufacturing company became the main one during the Porfirian era within the state of Chihuahua.

In March 1878, on the orders of the state government the Juez 2º de Paz, Ignacio Herrera, carried out an investigation into this Fábrica de Tejidos Bellavista. He reported that all the witnesses said they were paid en efectivo, with no obligation, though there was a tienda de raya, but that it was well stocked and the prices lowAMP, Justicia, Juez de Paz, Laboral, caja 30, exp. 19. However, the governor, on 12 May 1878, instructed the Presidente Municipal to ensure that the company paid in legal tender and that the tienda de raya carried goods of good quality at normal prices.

In August of the next year the Presidente Municipal received a complaint from the factory’s workers that the factory had been closed, that prices are higher than anywhere else in the world, and the tienda de raya did not stock the essentials of life. The only money in circulation were some chits (voletos anónimos) from Jacobo Muncharras and his sister Doña Arcádia to buy the things that were not in the tienda de raya. The complainants asked that the company be forced to adhere to the previous instructions; that that any notes (billetes) that the company issued in payment or as advances were signed and guaranteed by the company or manager and conformed with Angel Trías' law of 11 December 1878, so as to be freely accepted in the marketplace, and that the company be punished for issuing anonymous chits (billetes anónimos) which it refused to recognise.

On 14 August the Presidente Municipal again ordered the company to pay its workers in legal tender and asked the Juez 2º to investigate the anonymous chits and proceed accordingly. The judge’s report stated that the factory had been stopped for more or less three months for lack of cotton; that as a consequence it had issued some chits (voletos) for goods from the Establecimiento Mercantil de Buena Vista, but when people had used them to buy goods in other establishments the company had refused to honour them. One such note read “B. Vista Agosto 11 de 79 = Descontar = Francisca Rojas = Recibira dos pesos = 16ñ” without any signature whilst another read “ = Bella Vista = Agosto 11 de 79. = Descontar = Conrada Legarreta = Dos pesos = 16ñ“, again without a signatureAMP, Justicia, Juez de Paz, Laboral, caja 30, exp. 25.

By 23 August Jacobo Muncharras was willing to make arrangements but still had not paid in efectivoAMP, ibid. letter 2124 from Secretario de Gobierno, Chihuahua to Presidente Municipal, Valle de Zaragoza, 23 August 1879 and the matter was passed to the relevant JuezAMP, ibid. letter Presidente Municipal to Secretario de Gobierno, Chihuahua, 3 September 1879.

However, in 1880 problems arose between the owners and their 18 weaversPeriódico Oficial, 10 April 1880. Within a month, the Administración de Rentas del Estado decreed an embargo against the company for not having complied with the payment of their direct tax. In 1881 Doña Arcadia, her sons and her partner, Francisco E. Franco, petitioned Tomás Macmanus and Sons who took charge of everything related to put the factory up for sale. The Macmanus, in turn, granted special power to Adolf Iwonsky to sell Bellavista for $160,000 pesos, It is likely that part of the company was acquired at that time by Federico Sisniega. In 1909, the mezclilla denim out of Bellavista would have a value of 150 thousand pesos per year and the wages paid there were 1.25 pesos a dayAnuario, 1909.