Counterfeit notes are known with what appear to be genuine resellos, particularly the Inspección General de Policía in Toluca.

In addition, counterfeit notes were often revalidated with bogus resellos. For example, here is an example of a counterfeit $20 note with an impressive collection of three resellos: 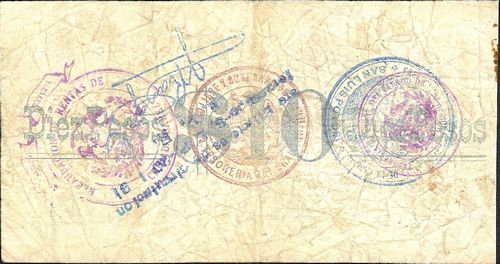 The same combination of resellos is found on this $10 note. 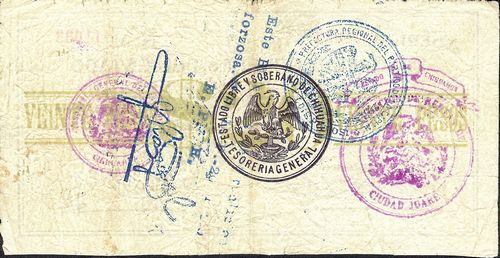 The following are probably counterfeits of legitimate resellos.

The two-line Tesorería de la Federación revalidation was also counterfeited. The counterfeit has a cleaner impression; the 'R' of 'REVALIDADO' is futher to the left, almost over the 'r' of 'Por' and there is no full stop after '1914.

This is considered a fantasy, produced to please the ignorant, because

(1) of the primitiveness of the overprint.

(2) it is known on 25c sábanas dated June 1915, when even the extreme rearguard of a Constitutionalist force would have had no need to overprint or validate Villista currency. Late Villista currency would also be more likely to be restricted to the border regions, if issued at all, and so available for the souvenir trade.

(3) the Extrema Retaguardia (Extreme Rearguard) of Obregon's Cuerpo del Ejército del Noroeste is not mentioned in any documentation.