On 25 March 1915 in correspondence between the state government and the Administrador Local de Correos over whether or not to accept sábanas the latter complained that no one had been to Querétaro to restamp the notes and no office had been authorised to do the work. 99% of the sábanas in circulation there were unstampedAQ, Fondo Poder Ejecutivo Sec 2ª Hacienda C-1 Año 1915, exp. 167.

San Juan del Rio was captured by the Carrancistas on 9 August 1915.

Tulancingo is the second-largest city in Hidalgo, located in the south-eastern part of the state.

Pachuca, the capital of Hidalgo, was captured by the Constitucionalists on 4 August 1914. In October 1914 the Administración Principal de la Renta del Timbre in Pachuca informed the state government that sábanas were of forced circulationPeriódico Oficial, 20 October 1914.

Tulancingo was captured by Convention forces under General J. Mendez on 2 May 1915.

Capula is a small town 25 kilometres west of Pachuca. 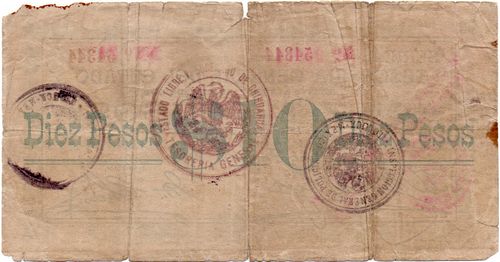 Toluca is the capital of the state of México, about 63 kilometres west-southwest of Mexico City. It was captured by the second Brigada del Cuerpo de Ejército Constitucionalista de la División del Noreste, under General Brigadier Francisco Murguia, on 8 August 1914. However, he left Toluca in November 1914 to join Carranza in his flight to Veracruz.

A notice issued by the Inspección General de Policía, dated 29 January 1915, in the names of Inspector Coronel F. Ibarra and Secretario J. M. Arriaga, declared that, amongst others, the Estado de Sonora, sábanas, dos caritas and Ejército Constitucionalista notes were of forced circulation but made no mention of revalidations. However, the Villista issues needed special attention as on 1 February the provisional governor wrote to the Presidente Municipal, recommending that he immediately use the police to ensure that all businesses that had closed establishments reopen them and, at the same time, ensure that Villista notes were accepted, since they were of forced circulation. The next day the Inspector General de Policia, Juan Camacho, reported to the Presidente Municipal that he had given the necessary ordersAMT, sección especial, caja 21, exp. 1014.

In March 1915 when Villista notes stopped circulating in Mexico City they appeared in great numbers in Toluca, particularly the $50 and $100 values. This ‘bad’ money drove out the ‘good’ and Governor Gustavo Baz had to authorise an emergency issue of fractional notesGaceta del Gobierno, 24 March 1915. However, the sábanas were more acceptable than Convention notes or those issued by BazGustavo G. Velazquez, Toluca de Ayer, Mexico, 1972. On 13 April the Governor decided that, until it received an answer as to which notes were of forced circulation, if anyone wanted to pay their taxes with Villista notes, offices should only accept 25% of any payment in such notes. Notices were put up to advise the public (AMT, Presidencia, caja 203, exp. 12). By April 1915 the sábanas had to be revalidated in accordance with with the Convention's decree of 23 January 1915 whilst on 30 June they were declared as being no longer of forced circulationRodolfo Alanis Boyza, Historia de la Revolución en el Estado de Mexico: zapatistas en el poder, Toluca, 1987.

The Carrancistas captured Toluca on 14 October 1915 and the next day invalidated all their opponents’ currency. 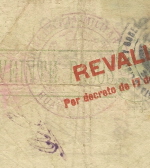 A purple 41mm round seal with 'COMANDANCIA MILITAR - HUAUCHINANGO, PUE.' and eagle in centre.

Huauchinango is a city located in the north of the state of Puebla. 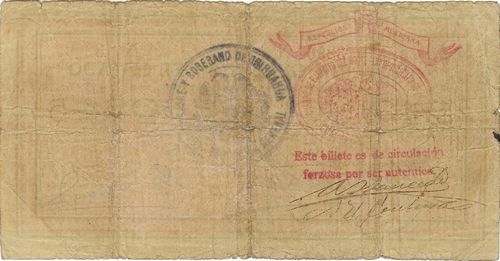 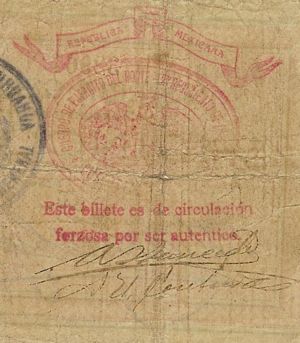 ‘Revalidado’ with eagle in centre.

A round stamp with ‘EJERCITO CONVENCIONALISTA – [ ] REGIMIENTO’ and eagle in centre with ‘COMANDANCIA’ below and inscription ‘REPUBLICA MEXICANA’ in scroll above.