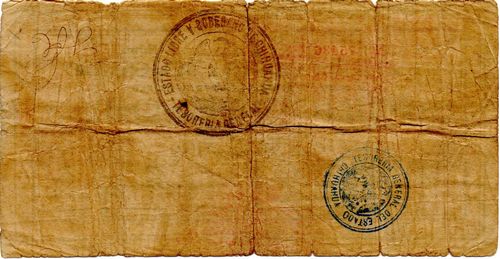 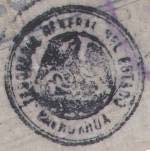 As agents from the Tesorería General were sent to review Chihuahua notes in other states this resello could have been applied in places other than Chihuahua.

For example, in late 1914 Gregorio R. Rivera was sent to Zacatecas by the Chihuahuan Treasury to oversee the revision there. In Zacatecas genuine sábanas, from five to one hundred pesos, were restamped with a blue seal and approximately one in ten notes was found to be counterfeitSiglo XX, 4 January 1915. On 9 January 1915 the jefe político of Zacatecas replied to the Presidente Municipal of San José de la Isla that if he had any doubts about particular notes, someone could bring them to the Oficina de la Jefatura de Hacienda, where the Comisión Reselladora was located, so that they could revalidated the good notes and discard the false, as, given the circumstances, the Comisión could not travel to the various municipiosAMZ, caja 13, exp 13, folios 114 and 115. By 13 January 1915, Rivera’s office had received enough dos caritas to begin replacing the sábanasSiglo XX, 13 January 1915 but they only retired the ones in bad condition, continuing to restamp the higher denominationsSiglo XX, 22 January 1915. The Jefe de Hacienda in Zacatecas was Teodoro Carrillo.

On 20 March 1915 the provisional Governor of Querétaro, Gustavo M. Bravo, wrote to his counterparts in Guanajuato, San Luis Potosí and Michoacán asking if they knew the whereabouts of the Comisión, charged by the Departamento de Hacienda with the resello de billetes, and asking them to send them to Querétaro because of the problems with circulation. Neither Guanajuato nor Michoacán knew where the commission wasAQ, Fondo Poder Ejecutivo Sección 2ª Hacienda C-1 Año 1915, exp. 166.

On 2 April 1915 the Presidente Municipal of Muzquiz, Coahuila, reported difficulties in the shops, when the Carranza currency was outlawed, because they did not have the Chihuahua currency. Saltillo asked Chihuahua to send them stocks. On 12 April Tesorero Vargas offered to send Saltillo an expert to revise the notes in that city, an offer that was accepted two days laterACOAH, exp. 11707.

Another agent was Emilio Ochoa who in April 1915 was working in Guadalajara, Jalisco.

Remigio Montoya: Montoya worked in Nogales. He had been sent by the Tesoreria General in Chihuahua but on 11 March 1915 Maytorena requested a replacement because Montoya had been arrested after being found restamping and signing a quantity of notes in his own roomJMM papers, box , folder , 11 March 1915. Montoya was caught, with his accomplices, stamping $50,000 in $20 dos caritas which differed greatly from the notes sent from ChihuahuaJMM papers, box Maytorena to Escudero, Chihuahua, 12 March 1915. The Los Angeles Times claimed that the counterfeit paper currency taken in at Nogales, amounting to about $500,000 in face value, was carefully saved, and that it was taken to Tucson by the expert himself, who spent about ten nights busily rubber-stamping all of it as genuine. His mysterious operations were reported to the Sheriff, who raided the room, and found not only the expert and his rubber stamps, but several prominent residents of Sonora. It was claimed that no less than twenty-eight Mexican officials were implicated by an investigation set on foot by Maytorena and that most of them fled to the United StatesLos Angeles Times, 29 March 1915. Chihuahua sent Francisco Porras as a replacementJMM papers, Vargas to Maytorena, 13 March 1915 and Villa himself, from Torreón, ordered that if Montoya was found guilty he should be severely punished pour encourager les autresJMM papers, box 5, folder 3, Escudero to Maytorena, 13 March 1915. However, Montoya seems to have been absolved and by 9 May was working in Guaymas. The Prefecto Municipal asked Maytorena to let him stay a couple of days longer to revalidate the billetes de firma (Chihuahuan sábanas?) which Rivas, the local official, had been unable to recogniseJMM papers, box 5, folder 9, telegram Presidente Municipal Escalente to Maytorena, 9 May 1915.

José P. González: was the inspector in Cananea. González worked for the Tesorería General in Chihuahua. Vargas sent González to Sonora in April 1915, asking Maytorena to send him back when his services were no longer required so that he could be deployed somewhere elseJMM papers, box 6, Vargas to Maytorena, 26 May 1915. González arrived at Nogales on 14 AprilJMM papers, box 5, folder 6, item 9. On 29 April he was in Naco stamping the various issues of Mexican currency in circulation there. Enrique Acosta, the new customs collector at Naco said that all currency in circulation had to be brought in for examination. A considerable amount was rejected, but the majority was approved with González’ initials and official stamp. Owing to the fact that the medium of value in Naco was principally the American dollar, González did not have a great deal of work to do. González left on 30 April for CananeaThe Bisbee Daily Review, 30 April 1915.He was in Naco on 2 May, in Cananea by 4 May and there on 20 May. On 25 May the Administrador of the customs at La Morita, Naco again asked for his services and the next week Maytorena replied that he would send him as soon as he was ableJMM papers, box 5, folder 12, 31 May 1915. On 27 May González was instructed to go to Villa Verde to revalidate the pay for the troops thereJMM papers, box 5, folder 12, Maytorena to González, 27 May 1915.

Francisco F. Porras: was the inspector in Guaymas. He was an employee of the Treasury General in Chihuahua and was sent to Sonora in March 1915 to replace Remigio Montoya JMM papers, box 5, folder 3, item 21, Sebastian Vargas to José Maytorena, 13 March 1915.On 17 May he was in Cocorit, and ordered to go to Fundición (halfway between Cocorit and Navajoa) to check the notes thereJMM papers, box 5, folder 11, Maytorena to Porras, 17 May 1915..

On 15 April 1915 the Tesorero General of Sonora told the Governor that, after they received the 30 January 1915 circular on counterfeit sábanas, the Oficinas de Rentas in the state accepted in payment and forced the circulation of all sábanas that conformed with the circular. Later, an envoy of the Chihuahuan government arrived with a remit to restamp genuine notes and decommission the counterfeits. Some of the notes that the Oficina remitted turned out to be counterfeit whilst public employees had also been paid with notes that turned out to be counterfeit and wanted to change themAGHES, Fondo Oficial Mayor, tomo 3024. 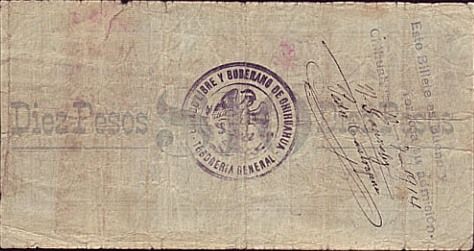 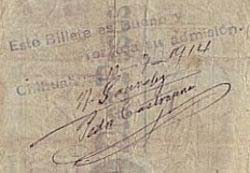 This validation was used in [June] 1914 and signed by [N.] González and Pedro Castrajena. 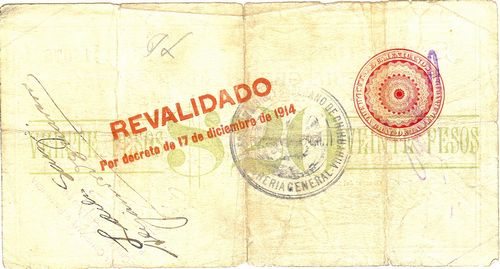 One REVALIDADO $20 note is known with the stamp of the 'AGENCIA COMERCIAL Y FINANCIERA / [ ] CUERPO DE EJERCITO DEL NORTE' and signatures of Lazaro de la Garza and Raymundo E Navarro. On 19 March 1914 de la Garza, from Ciudad Juárez, decided that in order to recover public confidence the Agencia would revalidate and sign good notesLG Papers, 3-C-14, telegram from de la Garza, Ciudad Juárez, to Chao, Chihuahua. 19 March 1914, but this note was probably a one-off favour rather than a systematic revalidation, because we would not expect de la Garza and Navarro to be personally involved in any long-term process. 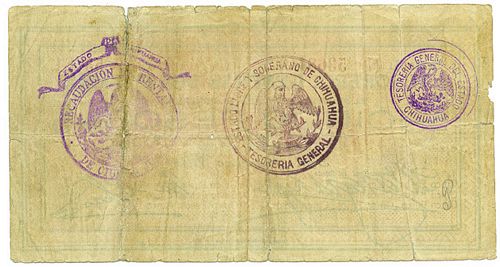 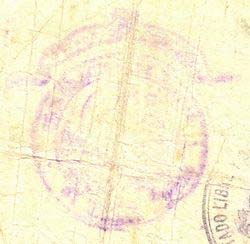 A round (40mm) violet stamp with ‘RECAUDACION DE RENTAS DE CIUDAD JUAREZ’ and eagle in centre with ‘ESTADO DE CHIHUAHUA’ in a scroll above. The design is easier to identify from counterfeit examples.

Ciudad Juárez, on the Rio Grande (Rio Bravo del Norte) facing El Paso in Texas, was the main port of entry into Chihuahua from the United States.

On 20 March 1914 Chao and Vargas arrived in Ciudad Juárez from Chihuahua to investigate the problem of the counterfeit money that had been flooding the city for the past two or three weeksEl Paso Herald, 21 March 1914. On 22 March they decided to establish a branch of the treasury in Ciudad Juárez where all questionable currency was to be examined by experts, and, if found genuine, so stamped. All rebel currency taken to Ciudad Juárez had to be examined at this office.The next day this restamped curency was selling for 21 cents in El PasoEl Paso Herald, 23 March 1914. Another newspaper reported that all currency brought in from the United States or areas outside the Constitutionalist control had to be taken to the treasury department, tax collector or custom house and checked. If found to be genuine it was to be stampedEl Paso Morning Times, 23 March 1914.

In August 1914 an El Paso newspaper reported that all money that was bought into Mexico was carefully inspected and marked before it was permitted to be taken to the interior towns. In Ciudad Juárez it was necessary for merchants, business men and even travellers to go to the customs house and have the money inspected and stamped by the treasury department officials before it could be taken to Chihuahua or spent in Ciudad Juárez, and the same order was issued at all of the other border ports. Extreme penalties were imposed for having quantities of counterfeit money in one’s possession. If the evidence showed that the money was known to have been counterfeit when it was brought into the country, the owner was to be ordered executed, while jail sentences were imposed for those who did not have their money inspected at the borderEl Paso Herald, 4 August 1914. 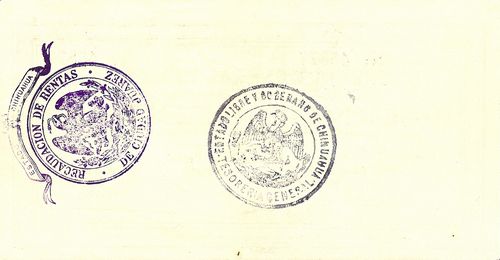 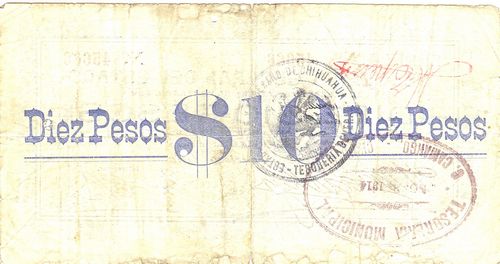 A large (58mm) brown oval stamp of ‘TESORERIA MUNICIPAL - C. CAMARGO - CHIHUAHUA’ with date in centre and red signature of [ ] below. Known dates range from 2 November 1914 to [ ].

Ciudad Camargo lies about 140 kilometres southeast of Chihuahua on the road to Torreón.

On 5 December 1914 Governor Saravia of Durango wrote to the Governor of Chihuahua that notes with resellos from Chihuahuan offices were appearing in Durango and asked which should be accepted. Four days later, he was advising his own officials that only those restamped by the Dirección General de Rentas in Durango and those restamped by the offices in Chihuahua, Parral, Torreón and Mapimí were of forced circulationADU, Sección de Hacienda, p213 telegram from Saravia to Jefe Municipal, Tepahuanes, 9 December 1914 so he does not seem to have known of the use of this resello at that time. 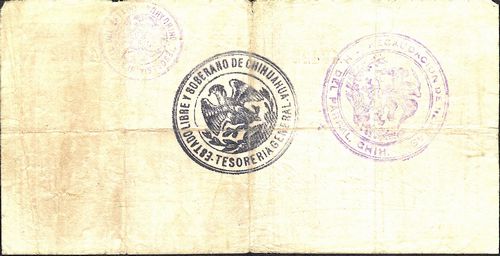 Hidalgo del Parral is a mining town about 220 kilometres south of Chihuahua.

On 9 December 1914 Governor Saravia of Durango noted that sábanas restamped in Parral were of forced circulation.