Guadalajara is the capital city of Jalisco, and was captured by Constitutionalists under Obregón on 8 July 1914. General Manuel M. Diéguez became the first Constitutionalist Governor and Military Commander.

Carranza’s decree enforcing the issues of the Constitutional states, including Chihuahua, and Diéguez’ own decree núm. 2 creating a fractional currency, issued in San Marcos a month earlier, were published in the first available official bulletin, El Estado de Jalisco, on 16 July 1914. In reply to numerous queries Diéguez issued circular núm. 2 on 30 July 1914, stating that the notes issued by the Cuerpo del Ejército del Noroeste and those issued, with Carranza’s approval, by the various Constitutionalist state governments were of forced circulationEl Reformador, 3 August 1914: Boletín Militar, 4 August 1914: México Libre, 5 August 1914.

On 29 September 1914 Adolfo Ruiz, the Jefe de Hacienda, declared that in response to his query the Tesorería de la Nación had stated that Villa’s notes were obligatory (adoptación obligatoria). Banks and shops had been refusing to accept themBoletín Militar, 30 September 1914; México Libre, 30 September 1914.

In late November 1914 it was proposed to set up an office to exchange all the authorised state issues for Gobierno Provisional notes, starting with small amounts and increasing the sums when they had trained expertsEstado de Jalisco, 26 November 1914. 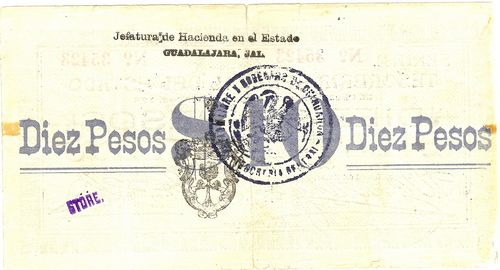 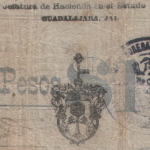 There are four different seals known. One is the inscription ‘Jefatura de Hacienda en el Estado - GUADALAJARA, JAL’ in two lines with the city's coat-of-arms below.

On 5 December 1914 Diéguez decreed that, because Chihuahua had issued far more paper money than Carranza had originally authorised, they (billetes emitidos por el Gobierno de Chihuahua y los que estuvieren firmados por Francisco Villa) would not be of forced circulation unless they had been restamped by the Secretaría de Hacienda y Crédito Público. Notes that did not have this resello would have to be restamped by the Jefatura de Hacienda in Guadalajara. The decree gave eight days for people in Guadalajara, San Pedro and Zapopan, and fifteen days for people in the rest of the state, to get their notes restampedCircular núm. 5 (El Estado de Jalisco, 5 December 1914). Two days later a notice from Adolfo Ruiz, the Jefe de Hacienda, set out the procedure for getting notes of five pesos or higher validated with a stamp that consisted of the state’s coat of arms and the letter head (membrete) of the Jefatura de Hacienda. Lower value notes could continue circulating until 15 December 1914 without a reselloEl Estado de Jalisco, 8 December 1914.

Diéguez was not popular with either the upper or the lower classes of society and many of the revolutionaries from Jalisco, headed by Julián C. Medina, joined Villa. On 12 December Diéguez was forced to move his capital to Ciudad Guzmán. Villa made a triumphant entry, and Medina became governor.

On 18 January 1915 Diéguez recaptured Guadalajara from the troops that Villa left behind: then Villa defeated Diéguez and on 13 February reoccupied the city, being received even more enthusiastically than on the previous occasion. Diéguez then retook the city on 18 April 1915.

Though this resello dates from 7 December 1915 it must have continued to be used after Diéguez left Guadalajara on 12 December, either in the new capital of Ciudad Guzmán or once the Carrancistas returned to Guadalajara.

The Villistas also revalidated notes in Guadalajara, a fact that could explain those notes with two different resellos from Guadalajara. Therefore the following three resellos from the Jefatura de Hacienda were probably Villista. 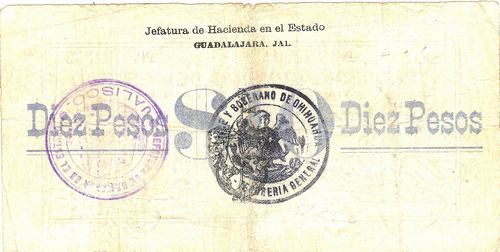 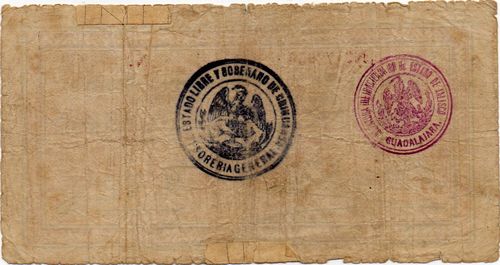 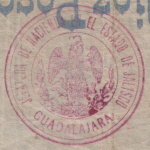 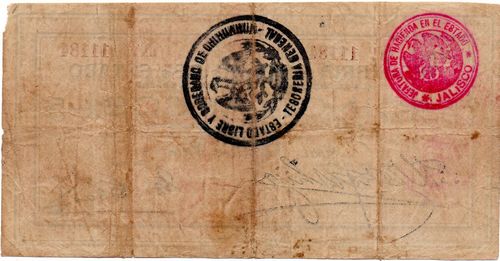 In early January 1915 La Republica newspaper reported that with the issue of the Convention's Bonos de la Deuda Interior Amortizable the Villista notes should disappear and so holders would no longer have to get them restamped or changed and at last they would be rid of the pressure of easy forgeries and notes in piecesLa República, Guadalajara, 8 January 1915. However, the bonos never materialised and the Villista notes survived in circulation (with increasing difficulty) for many months.

On 18 January 1915 the Constitutionalist forces of Generals Manuel Diéguez and Francisco Murguia recovered the city from the Villista generals Calixto Contreras and Julian C. Medina and the next day Carranza’s decree of 27 November disowning Villa and the Convention was printed on the front page. On 12 February Medina’s forces launched a drive westward from Irapuato, drove out Diéguez, and recaptured the city.

On 10 March Guilebaldo F. Romero, the interim Presidente Municipal of Guadalajara, declared all the notes issued by Villa to be of forced circulationLa República, 11 March 1915 but on 15 March he arranged for the sábanas to be restamped by the Jefatura de HaciendaEl Estado de Jalisco, 16 March 1915: La República, 19 March 1915 and on 22 March another notice qualified his original notice, in respect of the billetes blancos (sábanas), to those that had been so restampedLa República, 20 March 1915: El Estado de Jalisco, 23 March 1915. The office of the Jefatura de Hacienda was situated in the corner of the Jardín de la Soledad. Gustavo J. Jiménez was Director General de Rentas in August 1914 (El Reformador, 7 August 1914). On 21 August it was reported that Adolfo Ruiz, from Hermosillo, Sonora, would take over as Jefe de Hacienda within a few days (El Reformador, 21 August 1914). Jiménez was Jefe de Hacienda in early September but Ruiz was Jefe by 29 September (Boletín Militar, 30 September 1914). Sábanas without this resello could be refused. Thus, the Pagaduría de Policía Municipal in Guadalajara collected together all the ‘Blancos Villistas’ which it had paid it employees, $430 in total, and these were collected by the Tesorero MunicipalAMG, Miscelanea 1915, exp 89.

On 12 April 1915 a Luis G. Gámiz wrote complaining that he had been obliged to accept such a $10 note. When he went to the Jefatura de Hacienda to get some other notes restamped he was asked to hand over all that he had, showed this note and had it declared false, notwithstanding the fact that it had already had a red ‘Jefatura de Hacienda en el Estado – Jalisco’ reselloAJ, Hacienda 7-915 278371 letter from Luis Gámiz to Jefe Provisional del Ejecutivo del Estado, 12 April 1915. The note was Series A No No 52819 with a metal Tesorería seal, so it was indeed a counterfeit (Counterfeit $10 sábanas Type 2a)..

On 11 April Emilio Ochoa arrived from Chihuahua to head a commission to review the notes of the two Chihuahua issues. To allay the general distrust, a local newspaper reported that Ochoa was the only person in Guadalajara who had the key to distinguish the counterfeit sabánas and dos caritas and that the general public should therefore refrain from making mistaken judgements based on the size of signatures, the difference in colour of the seals, etc. According to the newspaper report the unmistakable indication of a forgery was minute but very noticeable to those who knew it. The commission could not reveal it under pain of death and so the public would have to contain itself for a short while. The whole report would appear to be propaganda rather than evidence that there really was some simple proof (for either issue) though Ochoa no doubt had better clarifications than the public and the key, or a list, of the control codes. Ochoa was visiting the various tax offices, commercial houses, financial institutes and anyone who invited him to let them know which notes were genuine. He was to stay in Guadalajara as long as was necessaryLa República, 13 April 1915. However, as the Carrancistas recaptured the city a few days later Ochoa would not have be able to achieve much.

Medina was forced out of Guadalajara in late April by Carranzistas under Diéguez who retook the town.

At the end of April when a large group of businessmen asked the new Presidente Municipal, Castellanos Farias, to allow the circulation of Villista notes of one peso and less. Castellanos agreedThe American vice-consul, Will B. Davis, also claims credit for this decision. He wrote "[on 19 April] I congratulated [Diéguez] on this determination, adding that if he would, in connection with this action, make all monies that had been forced upon the public since the revolution, of the denomination of one peso and less, circulate with equal protection, it would, in my opinion, greatly relieve the distress of the poor especially, and aid business in general. He took the suggestion favorably, and at the meeting of the business men's committee, authorized them to do this. … At present, all municipal and some State affairs, are in the hands of the Citizen's Committee of five, headed by Señor Louis Castellanos all good, conservative men.
My suggestion to General Diéguez in regard to the matter of revolutionary money, was merely the following up of my remarks on such matters which I made on the occasion of the visit of the Consular Corps to him on January 23d (which part I omitted in giving account of same in my letter dated Feb. 2nd) (Will B. Davis, Experiences And Observations Of An American Consular Officer During The Recent Mexican Revolutions, Chula Vista, 1920)., until the governor should decide otherwise, but although the notes continued to circulate, the public daily became more wary of them. However, later Villista paper even rose in value above the Carranzista paper, as a result of the activity of speculators and the tolerance of the authoritiesEl Presente, 5 May 1915; El Presente, 13 May 1915. The latter editorial refers to the famous red seals (los famosos sellos rojos).. 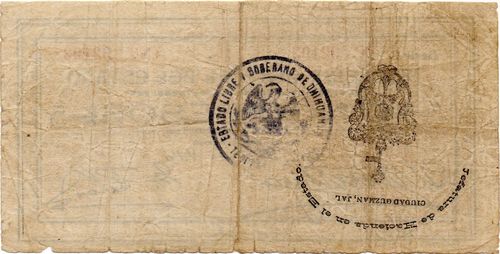 ‘Jefatura de Hacienda en el Estado’ in semi-circle with ‘CIUDAD GUZMAN, JAL’ below, under which appears the coat-of-arms.

This resello was a result of Diéguez’s instruction of 7 December 1914. When Diéguez was forced to move his state capital to Ciudad Guzmán on 12 December 1914 the Jefatura de Hacienda will have used this modified resello. It is unknown whether it continued in use after Diéguez moved the capital back to Guadalajara.

Encarnación de Diaz is a small town in Jalisco, about 40 kilometres south of Aguascalientes.

Lagos de Moreno is situated in the northeastern part of Jalisco. In September 1914 the Presidente Municipal ordered that all types of paper money would be of forced circulation, a disposition that was generally ignoredEl Diario del Hogar, 29 September 1914.