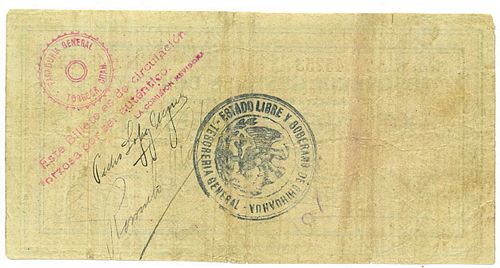 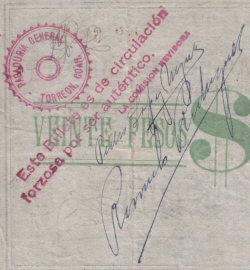 This resello was also applied to brand new notes before they were put into circulation.

Torreón, near the southwest border of Coahuila and separated from Gómez Palacio, Durango, by the Nazas river, was a vital junction throughout the revolution. Together with Gómez Palacio and Lerdo it makes up the Comarca Lagunera.

Villa occupied Torreón in April 1914, driving the Federal troops and six to seven thousand Spaniards out of the city. The authorities in Torreón were already restamping Chihuahua notes by November 1914ADU, Sección de Hacienda p178, telegram of Governor Saravia of Durango to Villa, 17 November 1914. By March 1915 because of the overwhelming number of forgeries in circulation Villa set up an office under control of the Comandancia Militar de la Comarca to sort out the genuine from the counterfeit with dramatic effectsACOAH, sección 31a, exp. 11735 correspondence between Governor and Comandante Militar Ramírez, Mayor Jefe de Estado Mayor Rodolfo Farías Flores and Francisco Escudero, Chihuahua, 6 March and 8 March 1915.

Carranza took over control of the railways in December 1914 and the title ‘Ferrocarriles Constitucionalistas’ dates from this time. 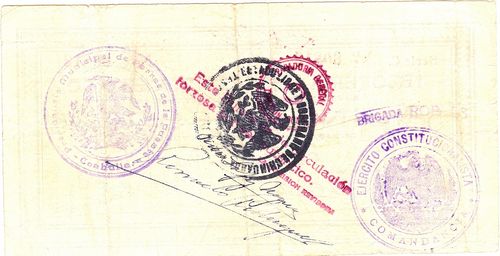 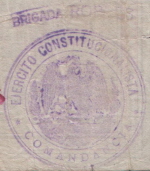 A large (44mm) round violet stamp with ‘EJERCITO CONSTITUCIONALISTA – COMANDANCIA’ and eagle in centre. Above the circle is the inscription ‘BRIGADA ROBLES’.

On 26 March 1914 the Brigada Robles (1,500 men under General José Isabel Robles) arrived at Vergel on the Central Railway, five miles north of Gómez Palacio. It joined in the attacks on Gómez Palacio and Torreón. On 3 April it left Torreón for San Pedro de las Colonias. By 14 May it was at Sauceda (on the railway from Torreón to Monterrey) and on 23 June it was in the attack on Zacatecas (by this time commanded by General Eugenio Aguirre Benavides since Robles remained wounded at Torreón).

Robles had been a primary schoolteacher on one of Madero’s haciendas and took up arms in his support. He supported Orozco but when Orozco joined forces with Huerta refused to follow him. One of Villa’s youngest generals, he broke with Villa to follow the fugitive president Eulalio Gutiérrez: he later surrendered to Villa, was pardoned and retired to private life. A considerable portion of the Brigada Robles refused to follow their commander, remained loyal to Villa and joined in the attack on Guadalajara in April 1915.

This Brigada Robles resello is found alongside the Torreón and Parras de la Fuente resellos. 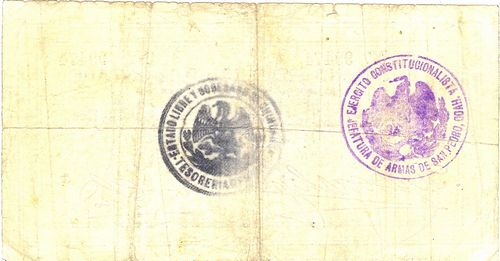 San Pedro de las Colonias is a city in the southwestern part of Coahuila, 56 kilometres north of Torreón.

After Torreon Villa’s División del Norte moved eastwards along the railway and on 10 April 1914 won a battle at San Pedro against the Federal General Velasco.

This resello probably dates from October 1914 as on 15 June 1915 Jesús Lechuga, Tesorero Municipal of San Pedro de las Colonias, wrote to the governor of Coahuila complaining that the Recaudador de Rentas had returned $465 Villista notes that the Tesorería General had refused as counterfeit, even though all had a resello. Most of these had been revalidated by the Jefatura de Armas in San Pedro, when it carried out a revision in October 1914, had been freely circulating since then and had been taken in in good faith by the municipal treasuryACOAH, Fondo Siglo XX, 1915, caja 14, folleto 5, exp. 7. On 17(?) June 1915, Lechuga took $2,090 in notes to the Oficina Revisora y Reselladora de Billetes in Torreón to be checked (ACOAH, Fondo Siglo XX, 1915, caja 14, folleto 5, exp. 7). 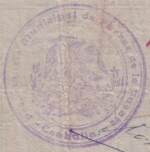 Parras de la Fuente is located in the southern part of Coahuila.

The Villistas were moving along the railway. After their defeat at Paredon the Federals evacuated Saltillo and the rebels occupied it on 20 May 1914.

Use of Villista currency would have spread to other areas of Coahuila. In July the Military Commander of Monclova and the Rio Grande wrote to the Municipal Presidents of Allende and Nava telling them to enforce Villista currencyACOAH, handwritten note, no reference.

Saltillo was within Carranza’s sphere of influence (he had been governor of Coahuila), so when tension began between Villa and Carranza, Villista currency fell out of favour. Because of the difficulties over people accepting sábanas on 24 July 1914 the Jefe de Armas in Saltillo, Coronel Severiano Rodríguez, ordered their forced circulation, with a fine of $100 to $500 for anyone who refused themPeriódico Oficial, 1 August 1914. The Villistas took Saltillo on 5 January 1915. Because of the number of counterfeit sábanas in circulation, on 14 January 1915 General Santiago Ramírez, decreed that holders should present them at the Palacio de Gobierno between 9.00 and 12.00 to be checked and revalidated, though only the $5 to $50 values needed to be restampedPeriódico Oficial, 16 January 1915. On 2 February Ramírez’ Jefe del Estado Mayor, Mayor Alfonso Castoreña, announced that the Oficina reselladora was reopened and would remain open until 10 FebruaryPeriódico Oficial, 3 February 1915. On 18 February Castorena announced that the office would definitely close on 25 FebruaryPeriódico Oficial, 20 February 1915. 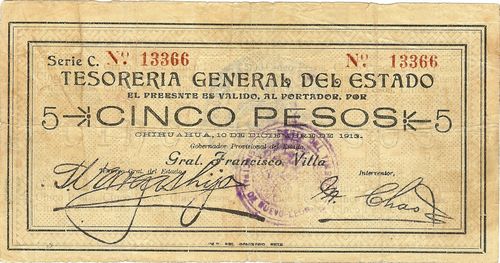 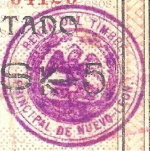 Monterrey was the largest city in northern Mexico and the state capital of Nuevo León. Villista currency was in use there in February 1914CEHM, Fondo MVIII telegram E Calderon, Monterrey to Carranza, Saltillo, 15 February 1914. On 25 May 1914 General Pablo Gonzalez wrote to Villa from Monterrey that there was a large amount of Villista paper currency there. He wanted to know who sent it or how it turned up there (APGG) and by June 1914 Villa was complaining to Carranza that there were difficulties with changing or accepting billetes del Estado de Chihuahua and asked him either to send the Nuevo León government enough Constitutionalist notes to exchange the sábanas, or to order their free acceptance throughout the Constitutionalist territoryCEHM, Fondo MVIII telegram Villa, Torreón to Carranza, Saltillo, 10 June 1914. General Antonio I. Villareal, governor of Nuevo León, issued a decree informing businesses that they must accept Chihuahua money. Merchants had been trying to avoid accepting any currency except that issued by the central Constitutionalist governmentEl Paso Herald, 13 June 1914.

On 22 April 1915 the Recaudador de Rentas del Estado in Monterrey asked Onofre Zambrano, the Tesorero General, whether the sábanas with the resello of the Administración Principal were still accepted. Zambrano asked the Governor who replied that Chihuahua notes were goodANL, Hacienda y Tesorería, caja 163.