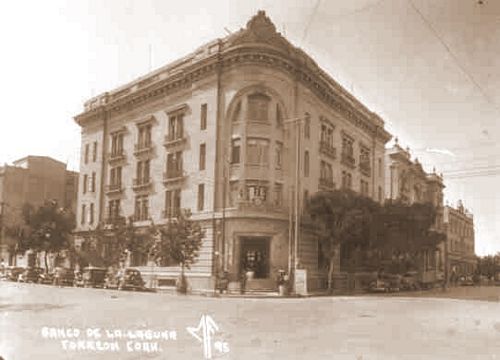 The bonos de caja of this bank are not strictly paper currency but included as they appear in the major catalogues.

This bank was formally established on 14 December 1907. It was to open on 1 January 1908 but the manager chosen, Miguel Torres Saldana, could not take up his post because of the failure of Cía. Prince y Torres Hermanos. So it opened on 7 February, in an office located on the corner of avenida Ferrocarril (today Presidente Carranza) and calle MúzquizThe board elected at the first AGM were Presidente, Juan F. Brittingham; .1er Vice-Presidente, Luis Gurza; 2º Vice-Presidente, Praxedis de la Peña; Secretario, Pedro Torres Saldaña; Vocales Propietarios, Marcelino Garza, Tomás Mendirichaga, Ernesto Madero, Juan Terrazas, Miguel Torres Saldaña, Aurelio Corral and Leandro Urrutia; Vocales Suplentes, Mariano Hernández, Francisco Larriva, Emilio de la Peña, Alberto Gurza, Adalberto A. Viesca, José Zurita and Adolfo Larralde; Pro-Secretario, Santiago A. Suárez. The Comisario propietario was Rodolfo J. García and Comisario suplente Oscar E. Garza. The Gerente was Francisco Larriva, Sub-gerente Mauro de la Peña and Cajero Antonio Rangel (Semana Mercantil, 2 March 1908). At the first meeting it approved a loan to Francisco I. Madero to cultivate lands around San Pedro de las Colonias. The main operations at that time consisted of granting loans for agriculture. On 2 November 1910, land was purchased to build a building, on 26 July 1911 the plans and budget for its erection were approved by the firm Brubaker and Stern and sixteen months later, on 20 November 1912, the building was opened.

However, before this, revolutionary conditions had made the bank’s normal operations very difficult, mainly due to the total lack of circulating money and the impossibility of bringing it in from other areas due to lack of communications. Besides, when the Maderista forces entered Torreón on 15 May 1911, the Banco de la Laguna, which still occupied the premises on the corner of avenida Ferrocarril and calle Múzquiz, suffered the complete destruction of its furniture and part of its archives, making it necessary to submit a claim to the Federal Government. In September 1913, the General in Chief of the Divisón del Nazas, E. Murgia, demanded money for the support of the federal troops that were practically besieged in Torreón, and as a result for some time the bank paid $2,500 a day. Then in October of the same year, after taking the town Francisco Villa imposed a forced loan of $3,000,000 on local businesses, assigning $80,000 to the Banco de la Laguna. This led to the issue of the bank-on-bank issues.

In early 1914 the bank moved all its books and other documents to Mexico City, opening an office in the Banco de Londres y México building, where some of the shareholders held several meetings in the company of the manager Francisco Larriva and the deputy manager Mauro de the Peña to discuss the company’s most urgent problems. As things went from bad to worse it was decided to protect the portfolio and important documents of the company by moving to the United States, where the bank’s founder, Juan Brittingham, had temporarily taken up residence. Once abroad, frequent meetings were again held, attended by several of the main shareholders who were also in exile, as well as the manager Francisco Larriva and José Zurita, the bank’s representative in Torreón, who made long and constant trips during those years to attend meetings.

On 10 March 1916, at a board meeting held in El Paso, Texas, the directors and shareholders attending were informed of the state of accounts and business relating to the years 1913, 1914 and 1915 and plans were made for a General Assembly to be held as soon as the tranquility of the country permitted. In 1917 there were very important meetings in San Antonio, Texas, in which Romulo Larraide, on behalf of a group of shareholders, asked for the liquidation of the company; but after debate a motion of Tomás Medirichaga that the matter be left to a General Assembly was agreed. 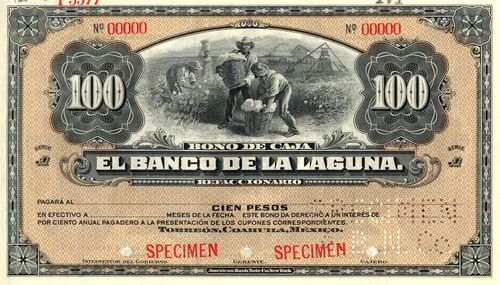 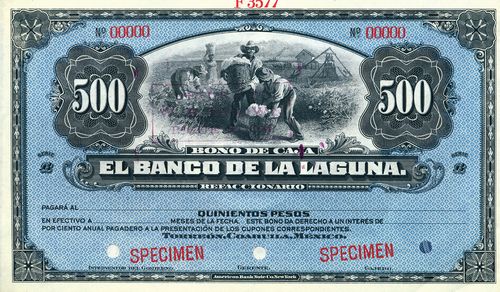 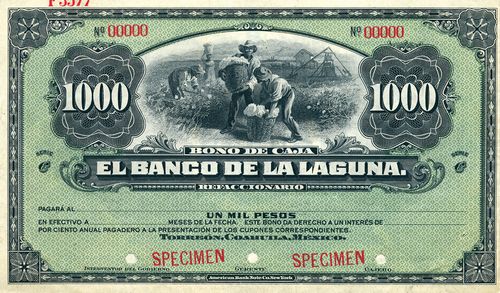