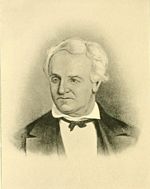 Samuel May Williams was born on 4 October 1795 in Providence, Rhode Island. As a teenager, he started working in the family's mercantile business in Baltimore, and then spent time in South America and in New Orleans, which he left because of debts. He landed in Mexican Texas in 1822, and Stephen F. Austin hired him for his colony in 1824.

Austin first hired Williams as a translator, because he knew Spanish and French, and clerk. Another important skill was his handwriting for in an era when all documents were written by hand, the ability to write legibly was critical to properly reading them later. Williams' knowledge of Mexican culture and Spanish business practices were also assets. In autumn 1824, Austin appointed Williams as a recording secretary for the Austin Colony.

Williams continued to accept additional responsibilities at the Austin Colony. He managed the Public Land Office, and he served as its postmaster from 1826. He served as secretary of the ayuntamiento from 1828 to 1832, a post requiring him to record official documents in Spanish and send them to the state government.

He worked for Austin for about a decade. Early in 1834 Williams co-founded a partnership with Thomas F. McKinney, setting up a warehouse at Brazoria, then relocated to Quintana at the mouth of the Brazos River. The firm operated small steamboats on the Brazos and used its warehouse to manage transfer of freight to and from the larger ships operating on the Gulf of Mexico.

On 30 April 1835 the governor of Cohuila y Tejas, Augustín ViescaViesca was opposed to the central government of Santa Ana. He was elected governor of Coahuila and Texas on 9 September 834, but the election was questioned by the incumbent governor, Juan José Elguézabal. The election was confirmed and Viesca took office on 14 April 1835, at the time of the controversy between Saltillo and Monclova over the location of the capital. Viesca assembled the militia to quell a revolt in Saltillo but was ordered to disband the force by Martín Perfecto de Cos, who supported the claims of Saltillo to the capital. On 21 April 1835 the state legislature disbanded and authorized the governor to move the seat of government to any site he might select. Viesca decided to move the capital to San Antonio de Bexar and urged the Texans to rise against the anti-Republican movement. So Williams’ concession was doubtful from the start, promulgated decree núm. 308 of the constitutional congress, granting Williams a 20-year concession to establish a bank in the Department of Brazos to be called the “Commercial and Agricultural Bank (Banco de Comercio y Agricultura)”. The maximum capital was set at $1,000,000, but the bank was authorised to open when $300,000 had been subscribed to the capital stock and a minimum of $100,000 had been placed in the vault; the bank was to be a bank of issue and was authorised to establish branches.

The notes were printed in sheet of four notes with varying plate designations (A, B, or C) appearing in two locations in the middle of each note. 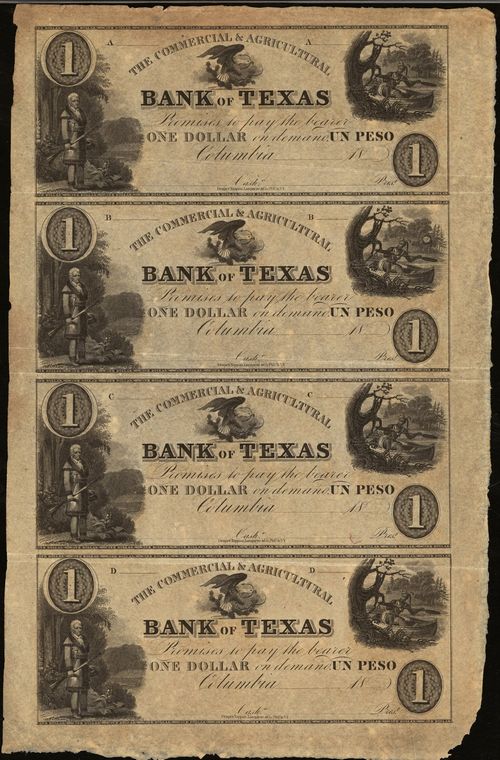 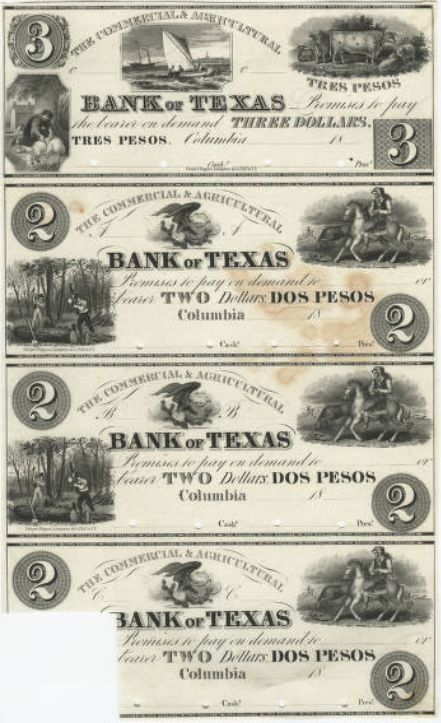 Williams went on a tour of the eastern United States in order to raise capital for his bank. He was selling stock in New York when he read about a possible war in Texas. He pivoted toward Texas independence while relying on financial assistance from his brother, Henry Howell Williams. He borrowed against his brother's credit to obtain the 125-ton schooner Invincible in support of a Texian naval force. In May 1836, Williams returned with ammunition and supplies loaded on his schooner, along with as many as 700 volunteers on three other boats.

On 10 December 1836, the First Congress of the Texas Republic recognized the bank charter granted to Williams.

After Texas gained independence, Williams focused most of his business activities in Galveston, and represented Galveston County for one term in the Republic of Texas legislature.

Exploiting his latent 1835 Mexican bank charter and the 1836 resolution from the Republic of Texas Williams opened the first incorporated bank to operate in Texas. The Commercial and Agricultural Bank opened in Galveston on 30 December 1847, and later established a branch in Brownsville, as well as agencies in New Orleans, New York City, and Akron, Ohio. Williams continued as the bank's president until his death on 13 September 1858, after an illness of about two weeks.

Early in 1859, the Texas State Supreme Court invalidated the bank charter of 1835 used to support the Commercial & Agricultural Bank. The ruling had three consequences for the bank: it made the bank responsible for paying a large fine imposed by the lower court, it lost the ability to issue notes, and all notes outstanding were to be redeemed and destroyed. This effectively killed the bank, though Williams did not live quite long enough to witness its ending.

During the American Civil War, the remainders from the original printing were cut in half and State of Louisiana notes were printed on the backs.