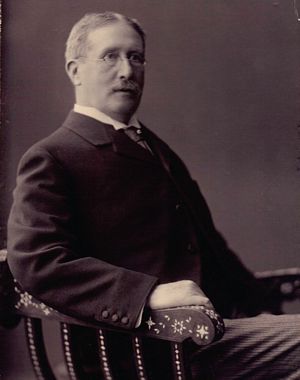 Guillermo (William) L. Purcell was born in Limerick, Ireland in 1844 and arrived in Matamoros, Tamaulipas in 1862, moving to Saltillo, Coahuila in 1872. In addition to general merchandise he invested in mining (forming the “La Constantia” mining company in 1879), smelting, cotton, railroads and banking. He owned two extensive and successful cattle ranches, known as“Esmeralda” and “Santa Anita y Terrenos de la Frontera”, comprising about 800,000 acres and located between the San Rodrigo and San Antonio rivers. He was a shareholder in the Banco de Coahuila and founder (in 1870) of the Casa Bancaria Purcell, with head offices in Saltillo and a branch in San Pedro at the centre of the cotton industry.

In 1880 he opened the Banco Purcell, which began operations in an office in the first block of the calle Zaragoza 246, where for years it shared space with the British consulate, a telegraph office and the Ferrocarril Coahuila y Zacatecas’ ticket office. The bank was never authorised by the Secretaría de Hacienda and so could not use the word ‘banco’ in its name. Its main business was financing the Purcell family concerns.

A wide range of notes issued by the company in response to the shortage of small change are known from the period of the Revolution, testament to Purcell’s vast interests and their history in banking, but also demonstrating how one cache, when found, can radically alter our knowledge of this area of numismatics. A study of the notes, their face value, their currency, and the manner in which they were to be redeemed, gives an insight on local economic conditions. If the date in the PAGADO (PAID) handstamp refers to the date when they were actually withdrawn from circulation (rather than some later book-keeping exercise), then we also have an indication of the length of time they were in circulation until the situation returned to normal.