San Pedro (de las Colonias) lies in the southwestern part of Coahuila, to the east-northeast of Torreón.

On 12 November the Mexican Herald reported that the stores in Torreón were open and doing business as well as could be expected under the trying circumstances that prevailed there, and that on the cotton plantations in the Laguna district picking was going on though, as the planters would not be able to market their cotton, they would be obliged to store it until the railroads re-opened. The greatest difficulty that the merchants and planters had to contend with was the scarcity of money. The rebels had not issued any fiat money, as they had done in Durango, but a number of the large planters were paying their employees in vales, which were accepted by the merchants of Torreón and surrounding towns. When a merchant had accumulated a number of these vales, amounting to about $100, he turned them over to the planter who had issued them and received a draft for the amountThe Mexican Herald, 19th year, no. 6647, 12 November 1913.

Purcell’s first known issue includes a series of low-value (5, 20 and 50 centavos) vales, dated July to September 1913. These mentioned that would be payable in bank-notes (for amounts of $5) or drafts (for large amounts) once communications, which had been interrupted by the rebels, had been renewed. 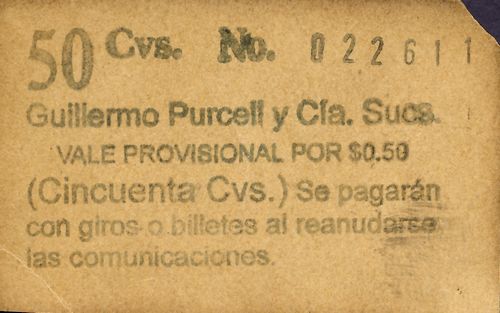 A series with the denomination highlighted in a different colour. 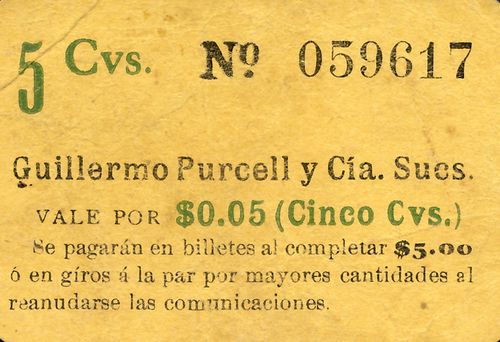 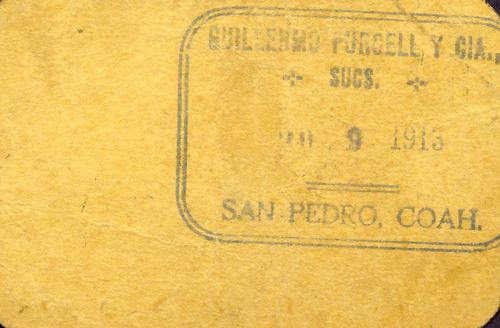 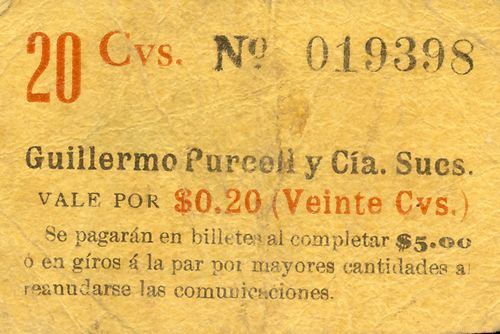 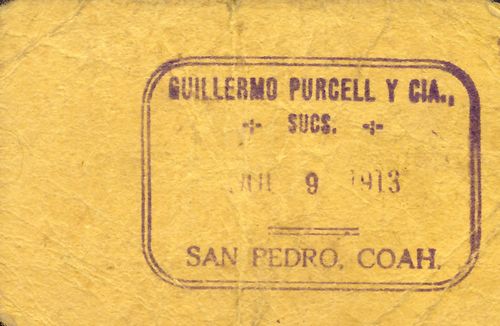 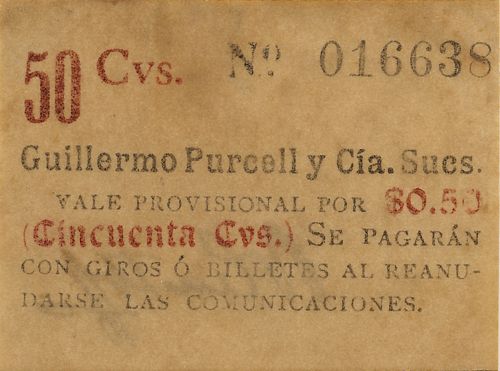 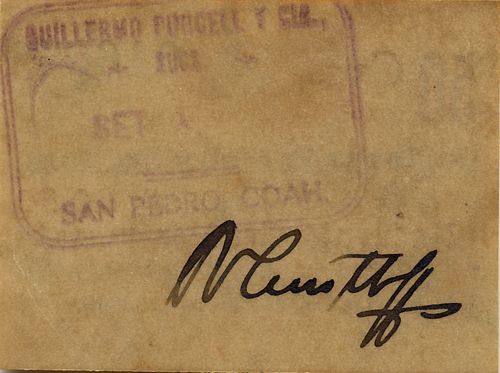 Higher-value vales for $1, $5 and $10, dated 30 July,  1 August and 1 September 1913, stated that they would be paid by drafts or checks drawn on Mexico City, Torreón, Monterrey or Saltillo or in bank-notes, which the company would import once the railroad communications had been reestablished. 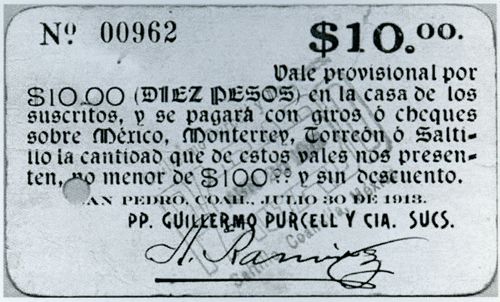 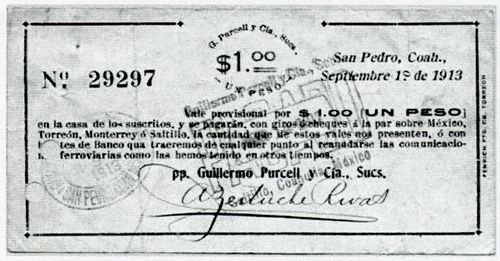 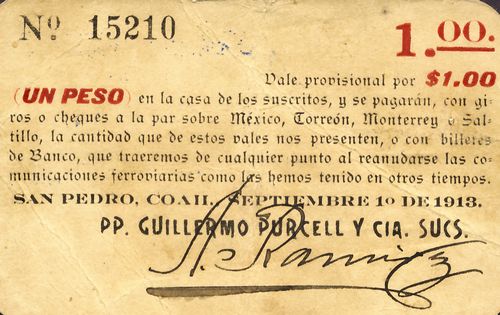 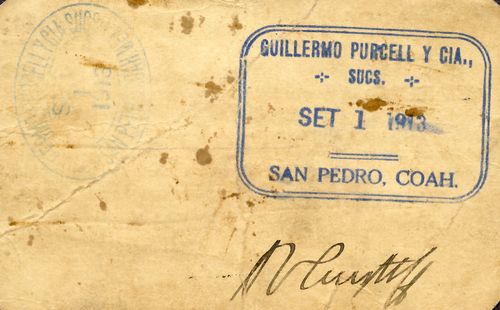 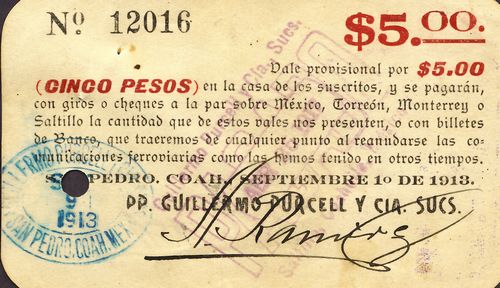 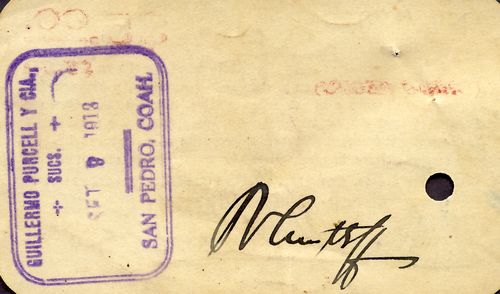 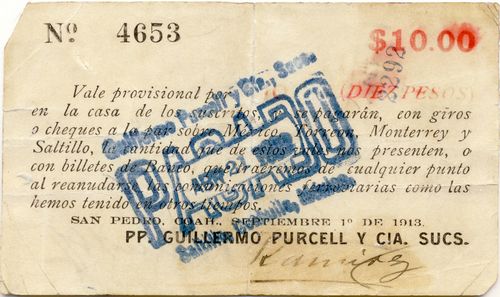 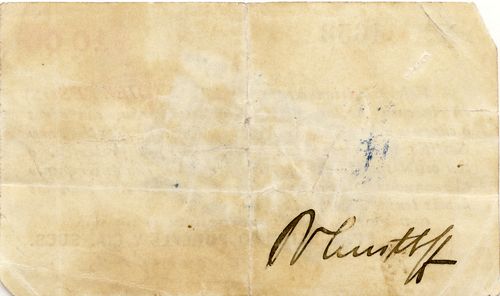 A 50c note dated November 1913 does not have the condition about communications being renewed. Perhaps we should not read too much into this (as a companion 50c vale, dated October 1913, from the Hacienda de Bolivar in San Pedro, carries the same wording), but it may be that by then circumstances in the Federal or Constitutionalist controlled areas were returning to what could pass as normal. 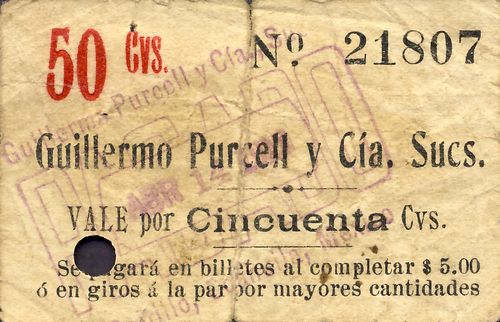 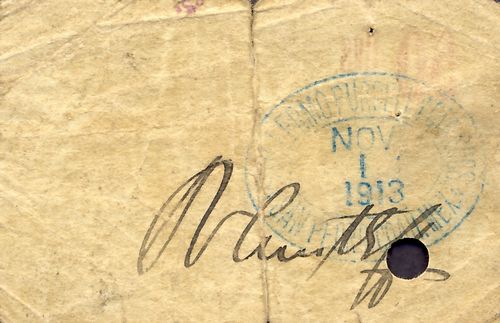 These issues were specifically referred to in a query from the Jefe Político of Cuencamé, Durango, on 10 February 1914 about the paper currency circulating in that district. The Jefe Político was told by the state government that the issue was not of forced circulation and that it was discussing the matter with the state of CoahuilaADur, Fondo Secretaría General de Gobierno (Siglo XX), Sección 6 Gobierno, Serie 6.1 Acuerdos, caja 1, nombre 3 letter Martín Martínez, Jefe Político, Cuencamé to Secretario de Gobierno, Durango, 10 February 1914.

The earlier 1913 San Pedro notes were all backed by a deposit in the Banco de Coahuila in Saltillo as on 19 March 1914 the bank’s manager, Tomás Olivares, wrote to the company confirming that it would honour the $40,000 that the San Pedro company had put into circulation, and for a period of a year would increase the guarantee to $100,000 for a ½ per cent fee. The next day, Arnulfo M. Garcia, the company’s attorney, sent a copy of the bank’s resolution to the state governor and asked for authorization for a total of $100,000 ($25,000 in 5, 10 and 20 centavos, $25,000 in 50 centavos, and $50,000 in one peso), some of which would replace the $40,000 in earlier notes, which were in a poor state. On 21 March the company was given permission to continue using its vales, and set a date of 30 April to redeem the notes of $2 or more and 31 May for the smaller values, after which date their circulation would be prohibitedACoah, Fondo Siglo XX, 1914, caja 8, folleto 1, exp. 1.

On19 March the company issued a public notice that in order to comply with the Jefe Político’s ruling of 8 March regarding the circulation of vales in the town up to 30 April it would receive all the notes of $2 and above for exchange and withdrawal, whilst the notes of 5c to $1 would continue to circulate. All the notes would be paid with drafts on Mexico City, Monterrey or Saltillo or, if possible, in banknotes. 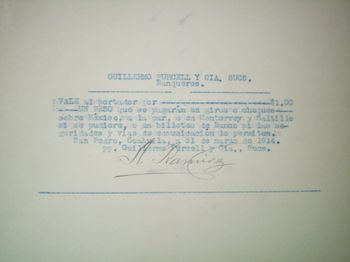 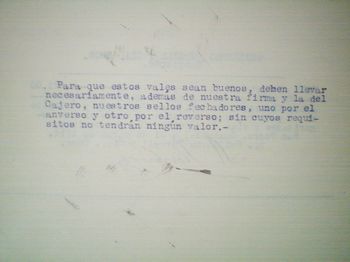 These higher-value notes (50c, $1 and $5) were payable in the paper money that was in circulation at the time of exchange, i.e. the current Constitutionalist issue. 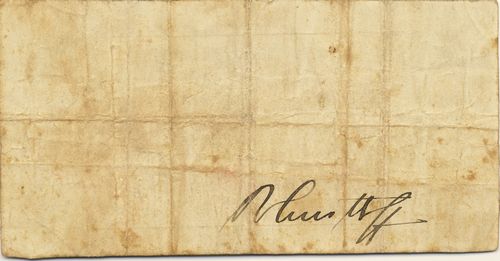 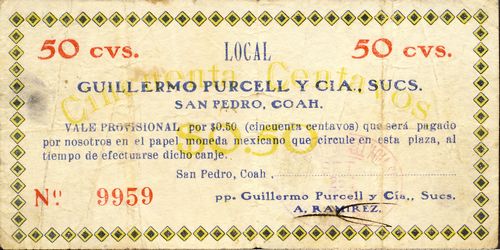 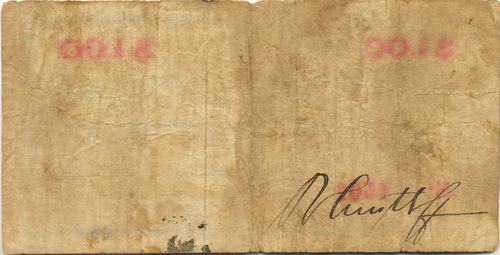 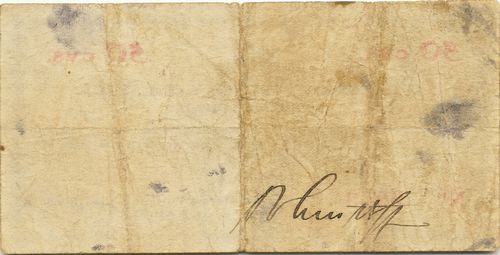 These cheques for 25c, 50c and $1, with date stamps from February 1917, were in use in the Purcell haciendas, run from San Pedro, and were payable a la par in cheques drawn on New York, San Antonio, Eagle Pass or Laredo, possibly reflecting the failure of the Carranzista government to win local support for its infalsificable currency in the northern areas bordering the United States. These three examples are for the Hacienda El Burro.

On 8 April 1917 State Secretary (Oficial Mayor Encargado del Despacho) Rafael Flores wrote to the Presidente Municipal of San Pedro that in view of the abnormal circumstances that prevailed in San Pedro Guillermo Purcell y Cía., Sucs. could continue paying their workers in the Laguna with cheques, until the situation returned to normalACoah, Fondo Siglo XX, 1917, caja 15, folleto 3, exp. 10.