The American Book & Printing Company, established in 1882, with a capital of almost half a million pesos and over two hundred workers, half of them women and children working as binders, was one of the largest printing companies in the country but it had no experience in printing currency, as is obvious from the quality of their notes.

The Banco Peninsular Mexicano of Yucatán also issued $1 and $5 notes from the American Book & Printing Company, the $1 a poor impression of an earlier $1 note that the ABNC had produced for its predecessor Banco Yucateco.

Also known only as proofs or remainders are $5 and $10 Banco Oriental de México notes, from the American Book & Printing Company. 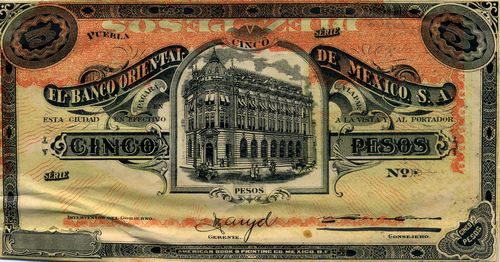 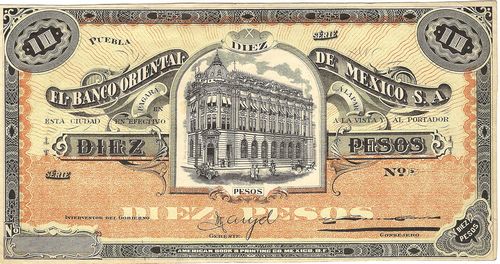 One of the consequences of using Mexican City printers was that the resulting notes were easier to counterfeit and there are several reports of these later bancos being falsified.

The American Book and Printing Company also agreed a contract with the Banco de Aguascalientes to produce $1 notes, but on 28 April 1914 the bank agreed, as the printer had closed its workshops, that the contract was void and, because of the circumstances in which the bank found itself, decided not to pursue the ideaAGN, SC224 Antiguos Bancos de Emisión, caja 102, libro 283 Minutes of board meeting, 28 April 1914. No proofs or examples are known.