The American Bank Note Company produced the following notes after the bank changed its name to Banco de Londres y México. It produced a special vignette of Benito Juárez (C155) and of its stock vignette the one used for the back of the $500 note was entitled "Horse Fair". 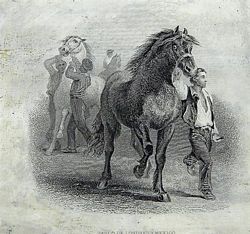 This engraving was taken from a painting of this title by French artist Rosa Bonheur (1822-1889). The painting debuted at the Paris Salon of 1853, and was gifted by Cornelius Vanderbilt in 1887 to the Metropolitan Museum of Art in New York, where it presently resides.

Over the years the ABNC altered the plates by changing the date line and engraving various signatures.

In February  and March 1914 the ABNC printed the following notes but never delivered them to the bank.