The American Bank Note Company produced its first notes for the Banco de Londres, México y Sud-América in Mexico in August 1866, a few months after it produced a similar series, with similar designs, for the bank's branch in Lima, Peru.

The $100, $500 and $1,000 notes in the first run used the same underprint and back plates made for the Banco de Londres México y Sud América in Peru.

For later runs the ABNC added the text "en la Ciudad de México". The $50 note again used the back plate for the Peruvian branch. 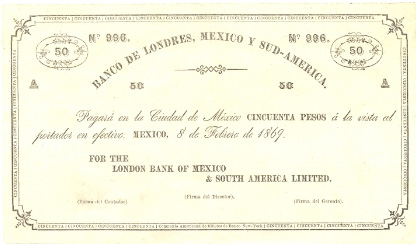 So, unless this is a complete fantasy, the most plausible explanation is that this was either a simple mock up prepared by the bank to suggest the layout of a new issue (but why not just use one of the existing notes?) or a interim measure to cover a temporary shortage of notes. The ABNC did produce a additional run of $50 notes in February 1869.

On 31 December 1874 Thomas Horncastle (Tomás Horncastel) wrote to the Ministerio de Hacienda to explain that the bank was unable to comply with a condition of the law of 1 December 1874. As some notes had been counterfeited it had been necessary to print a new issue to replace the notes in circulation. These were printed in the United States, from where they were sent to London to be signed and stamped before being sent on to Mexico. The ministry agreed to an extension to the end of June 1875, by which time all the notes currently in circulation should be withdrawn and replacedEl Foro, 3 January 1875. On 2 June 1875 the Ministerio de Hacienda extended the period for holders to exchange their old notes for the new issue (with revenue stamps) to 31 December.

In 1883 the ABNC produced $2 notes printed from altered plates for the Peruvian 2 soles note of this bank. The notes have the same engraved signature, of William Morrison, and the weirdly imperialist portrait of Queen Victoria. The letters A to F are check letters, not serial letters.

On 21 August 1875 El Foro reported that some other newspapers blamed the bank itself for the appearance of counterfeit $100 notes. The bank had refused to pay out on counterfeit notes and the holders had, in turn taken their case to the courtsEl Foro, 21 August 1875.

A handdrawn counterfeit of a $100 note.