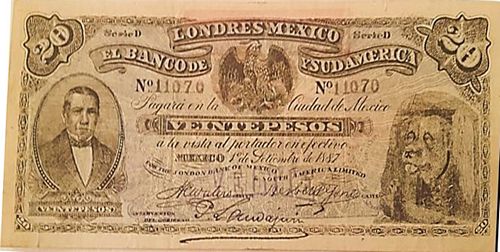 When a bank changed the design of a note or series of notes, as in the case of the Banco Mercantil de Veracruz’s $10 note in 1903, it was often a consequence of an attempt at counterfeiting. The Banco de Londres, México y Sud-América’s Bradbury and Wilkinson notes seem to have been particularly susceptible to attack and an incidence in 1889 no doubt confirmed the decision the bank had probably already taken to move, in line with the other Mexican banks, to the American Bank Note Company.

The circumstances were as follows. Late at night on 31 May 1889 the police, under Inspector General Luis Carballeda, arrested a drunken Francisco Herrán Planas who was trying to buy another drink in “La Noche Buena” with a dubious $20 Banco de Londres, México y Sud-América note. When the police took him to the bank manager’s office the next day they found two storekeepers, Manuel Granda of “Las Tranvías” and Antonio Aguirre of “Las Dos Naciones” already there. These identified Herrán as the man who had paid them with similar counterfeit notes.

Under interrogation Herrán implicated an Eduardo Guerra and the police found 24 notes in his house. Guerra in turn gave up Julio César Hidalgo and police found eight packets containing 376 notes and 24 loose notes in his house (the next day they recovered another 150 notes). In a laundry opposite the Peralvillo racecourse they found three plates, two for the face and one for the reverse.

A letter from Arturo Goyzueta, a rich merchant who ran a sizeable business in Tacuba, where he had also served as a local official, led to his house in Tacuba being searched and inside a piano were found two more plates (for adding the revenue seal and the interventor’s signature) and another note. So Goyzueta was arrested as an accomplice.

The police found 269 notes in Herrán’s house and, in an empty house in Popotla, 20 more notes, completed but lacking the revenue stamp, 729 notes printed on the face only, and 2,410 with just the first pass.

Herrán also named Félix Gutiérrez, owner of the “Nuevas Reformas” shop who owned the printing press and tools, Manuel Martínez who provided the resources, and Miguel Riego who passed the notes (he still had four in his possession). Herrán admitted that he and Guerra engraved the plates, and that Goyzueta and Guillermo Casaprima provided the money. The people also admitted that they had previously tried to forge $10 notes.

According to a newspaper report the most noticeable differences in the notes were:
1. The light blue color of the ink was a little stronger on the fake banknotes than on the legitimate ones, though this could only be detected by someone accustomed to dealing with these notes.
2. The government seal on the reverse had a circle in the middle, reading INTERIOR RENTA. In the counterfeit notes only the letters INT could be distinguished, as opposed to the whole word on the genuine. On the genuine notes one could read 1889 on this seal, on the counterfeits just 18. The ink was also pink rather than red.
3. Benito Juárez’ upper lip was less defined than on the genuine notes.
4. Interventor Lanázuri’s signature was less legible and nearer the imprint BRADBURY WILKINSON & Co ENGRAVERS LONDON.
5. the word GERENTE was over the shadow of the letters IN of VEINTE, but in the bogus notes it was below the shadow.
3. Most obviously, all the counterfeit notes had the Puebla branch seal. On the genuine notes this measures three by two centimetres and on the bogus 2½ by 1½ centimetres. Also, the genuine notes had a stroke above and below PUEBLA, while the counterfeit did not.
Other reports mention the thinness of the paper and the misplacing of the numbers.

A fake $20 note was illustrated in a presentation La Falsificación y Alteración de la Moneda Mexicana, given by Manuel Farrera to the Sociedad Numismática de México on 9 March 2015 but as it is unfinished, without seal (or Puebla stamp) it is impossible to decide if it came from the same operation. Certainly, it does not appear particularly professional or able to fool an expert.

The new ABNC notes arrived at the end of the year with the $20 note the first value in the series to be placed into circulation, on 1 January 1890.

Ironically, this $20 ABNC note was itself the subject of a more professional counterfeiting operation, in 1916.