On 27 February 1915 Villa wrote from Guadalajara in response to an enquiry from the governor, Benito Díaz, listing the notes in forced circulation, including the Gobierno Provisional notes which, if they had not been revalidated, needed to be revalidated straightaway in the Oficinas del Timbre of the statePeriódico Oficial, Aguascalientes, Tomo I, Núm. 11, 6 March 1915. This reiterated the decree núm. 4 that he had issued in Guadalajara on 13 February.

The Departamento de Hacienda y Fomento of the Gobierno Convencionista authorised the Administradores Principales del Timbre in Baja California to revalidate the Gobierno Provisional de México issue, with a timelimit of 25 April 1915 was set for such revalidations.

Because of the difficulties with communcations with the central government on 2 February 1915 Villa created three departments of state based in Chihuahua. On 17 February 1915 Francisco Escudero, in charge of the Departamento de Hacienda informed the public that they had until the end of the month to present their notes for revalidationVida Nueva, Chihuahua, Núm. 263, 18 February 1915; La Prensa, 24 February 1915.

On 17 February González had given notice to people who had deposited their Gobierno Provisional notes in the Administración that they could collect them, so presumably the date on the overprint was changeable.

On 31 March, following Villa’s banning of Carrancista issues, the military governor of Chihuahua, Fidel Avila, prohibited the circulation of all such issues except for those that had been revalidated by the state governmentPeriódico Oficial, Chihuahua, Año II, Num 14, 4 Abril 1915.

It was only on 5 March that D. Ramos, the Administrador Subalterna del Timbre in Saltillo stated that a department would be open from 8 March to revalidate the notes listed in the 17 December decree. The department would stay open until 31 MarchPeriódico Oficial, Coahuila, Tomo XXIII, Núm. 59, 6 March 1915 and Núm. 60, 10 March 1915.

The Presidente Municipal of Monclova wrote on 23 March that there were enough such notes (needing revalidation) in Monclova and asked whether people had to go to the capital or whether they would establish an office in his townAMonclova, Fondo Presidencia Municipal, caja 414, Libro copiador de oficios, pag. 121.

'PAGADURIA GENERAL - TORREÓN, COAH.' and the signatures of Pedro López Negrete and Romulo Rodríguez of the Comisión Revisadora

This resello is included here but it will not have been part of the general progam to revalidate the Gobierno Provisional notes but applied to a particular high-value note. It might be of interest that the resello does not include the usual legend 'Este Billete es de circulación forzosa por ser auténtico. LA COMISION REVISADORA' (as here).

Torreón, near the southwest border of Coahuila and separated from Gómez Palacio, Durango, by the Nazas river, was a vital junction throughout the revolution. Villa occupied Torreón in April 1914, driving the Federal troops and six to seven thousand Spaniards out of the city. The authorities in Torreón were already restamping Chihuahua notes by November 1914ADur, Sección de Hacienda p178, telegram of Governor Saravia of Durango to Villa, 17 November 1914. By March 1915 because of the overwhelming number of forgeries in circulation Villa set up an office under control of the Comandancia Militar de la Comarca to sort out the genuine from the counterfeit with dramatic effectsACoah, sección 31a, exp. 11735 correspondence between Governor and Comandante Militar Ramírez, Mayor Jefe de Estado Mayor Rodolfo Farías Flores and Francisco Escudero, Chihuahua, 6 March and 8 March 1915.

On 20 October the Presidente Municipal of Colima, Carlos G. Rosaldo, published a flyer that the period for depositing notes had been extended until the end of the monthAMCol, 61,exo. 3.

On 15 March 1915 notices were posted in the usual places that by order of the government all Gobiero Provisional notes ought to circulate, even when they were not revalidatedCrispín Espinosa, Efemérides Guanajuatenses, 1917. The next day A. M. Ugarte, the [                     ] confirmed this.

This revalidation refers to Escudero's decree from the Departamento de Hacienda in Chihuahua of 17 February 1915.

The Presidente Municipal of Salvatierra, Guanajuato, published a circular reminding holders of Carranza's circular núm. 48 on 10 January 1916ASalvatierra, Municipal, caja 1915. On 21 March 1916 Oficial Mayor Juan Araujo, noting that businesses and the public were refusing to accept Constitutionalista and Gobierno Provisional notes with red and blue backs that had not been revalidated instructed the various offices of the Administración General de Rentas to take them as being of forced circulation, thus derogating his disposition of 12 Februaryibid.. This was acknowledged by the Administración Subalterna del Timbre in Salvatierra on 28 Marchibid. and copied to the Presidente Municipalibid..

On 23 March the Presidente Municipal of Tarimoro reported that people were refusing to accept Veracruz notes of five pesos or greater, even if they were revalidated C. Paredas, Tarimoro to Presidente, Municipal, Salvatierra, 23 March 1916. On 29 March Salvatierra sent him a copy of their recent circular.

On 4 March 1916 the Guanajuato government reiterated the paragraph in circular núm. 48 that notes that lacked resellos were still forcedPeriódico Oficial, Guanjuato , 9 March 1916. Salvatierra relayed the information in its own circular on 29 MarchASalvatierra, Municipal, caja 1915.

On 13 April 1916 the Jefe de Hacienda in Guanajuato noted that businesses were refusing to accept Gobierno Provisional notes that lacked the resello of the local Jefatura de Hacienda. In fact these notes did not need the resello, and any that had been so revalidated had been in error, when they were presented along with other notesibid..

On 1 January 1915 the governor Daniel Cerecedo Estrada reported that as the Convention’s period for revalidating had been extended the Gobierno Provisional notes which had been nullified remained valid until 20 JanuaryAH, Fondo Atotonilco el Grande, Sección Gobierno: Serie: Bandas y Decretos, Caja 77, Exp. 1.

On 12 November 1915 the Jefatura de Hacienda received instructions to start paying out on the deposits that had been made. The Jefe de Hacienda, Gabriel Vargas, said that as many poor people were holding certificates of deposits for small amounts on Mondays and Tuesdays they would pay out on $1 to $500, on Wednesdays and Thursdays from $500 to $5,000 and on Fridays and Saturdays on amounts over $5,000El Demócrata, Guadalajara, Tomo I, Núm, 13, 13 November 1915. 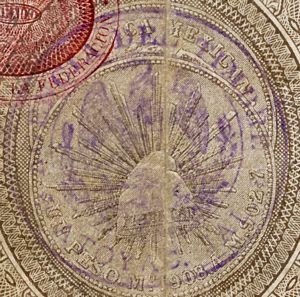 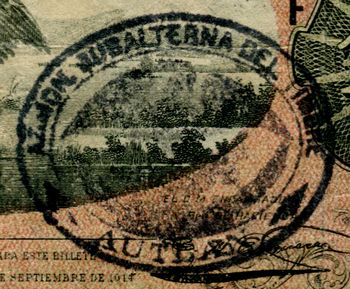 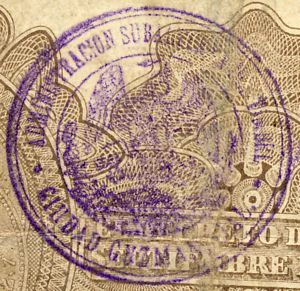 The Administración Principal del Timbre used a variety of seals. 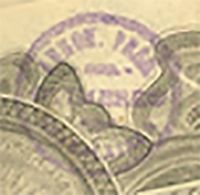 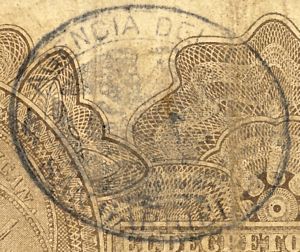 Again, this revalidation refers to Escudero's decree from the Departamento de Hacienda in Chihuahua of 17 February 1915. 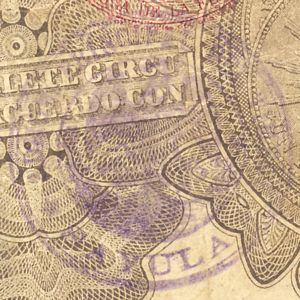 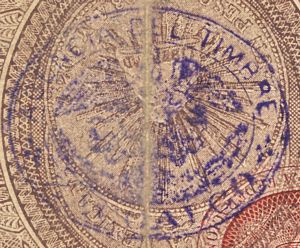