On 19 January the Secretario General told the Prefectos of the state that the $1 notes (Series A) up to number 999999 were good while higher numbers, though unacknowleged, could circulate. $5 notes were null, unless they were revalidatedAMMor, caja 29, exp. 114. However, on 22 January 1915 the Governor told the Prefectos that the $5 Gobierno Provisional notes (Series B) were of forced circulationAMMor, caja 29, exp. 61.

On 4 March governor José I. Prieto issued a decree listing the notes of forced circulation, including Gobierno Provisional notes that had been revalidated. A week later, on 10 March, he added to his last decree, listing the seral numbers of the valid Gobierno Provisional notes and stating that they could be revalidated in the Oficina de la Pagaduría General de la Jefatura de Operaciones from 15 March until 15 April by means of a stamp placed on the reverse of the note. In the other districts the notes should be presented to the Oficina Rentística in each district capital.

Although this revalidation refers to the 10 March decree it is applied to the face of the note. 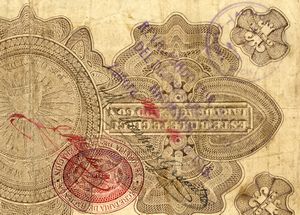 On 25 February 1915, Raul Madero, governor of Nuevo León, in his decree núm. 3, ordered that all Gobierno Provisional notes should be revalidated in the Administración Principal de Timbre with a red inscription “Revalidado por orden del Departamento de Hacienda” and the signatures of the Administrador and Contador. Holders had until 15 March to complyPeriódico Oficial, Nuevo León, 5 March 1915.

However, following Villa's disowning of Carranza, on 13 March Madero, in his decree núm. 5, withdrew unrevalidated Gobierno Provisional notes, giving holders ten days to exchange them for Chihuahua notes. Revalidated notes continued to be of forced circulation.

On 1 March 1915 the provisional governor of Querétaro, Gustavo M. Bravo, asked Villa’s Secretaría de Hacienda in Chihuahua for authorisation to revalidate the Gobierno Provisional de México notes since, because of the difficulties in communications, there were many notes without a resello in the city. Chihuahua agreed that they could revalidate notes during the month of MarchAQ, Fondo Poder Ejecutivo Sec 2ª Hacienda C-1 Año 1915 Exp. 142.

The same day the Administrador Principal, R. Martínez, wrote to the governor that the Departamento de Hacienda (in Chihuahua) had told him that the Gobierno Provisional de México notes should be revalidated with a stamp stating “Revalidado por acuerdo del Departamento de Hacienda” with the date, and his and the contador’s signature, all in red inkAQ, Fondo Poder Ejecutivo Sec 2ª Hacienda C-1 Año 1915 Exp. 144.

This blue circular (43.5mm) rubber stamp with the legend ‘PREFECTURA REGIONAL DEL PARTIDO DE LA CAPITAL - SAN LUIS POTOSI’ and an eagle in the centre, together with a three-line inscription ‘Este Billete es de circulacion forzosa. S.L.P.....1915 E.P.R’ and the stamped signature of J. Rangel was also used on the sabánas and so probably predated the general revalidation.

On 17 March 1915 the government issued its circular núm. 10 stating that it had been told by the Departamento de Hacienda in Chihuahua to exchange Gobierno Provisional with Chihuahua notes, as far as their resources allowed, and in the meantime to suspend the revalidation of the Gobierno Provisional notes ASLP, Ayuntamiento 1915.14.

On 25 September F. A. Borquez, the Jefe de Hacienda in Sonora told the public that the notes, whether or not they had been revalidated, were of forced circulation, since his Jefatura had not received funds to exchange themBoletín Oficial, Tomo I, Num 3, 27 September 1915. 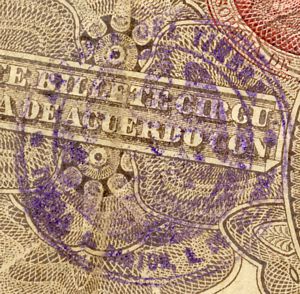 On 14 January 1915 the Jefe de Hacienda, Teodoro Carrillo, said that they were beginning to exchange the notes. For quantities greater than $100 the exchange would be made in the Jefatura de Hacienda and for smaller sums in the Adminstración de TimbreSiglo XX, Zacatecas, Núm. 52, 14 January 1915.

Finally, it should be mention that other overprints might have been applied just in the course of business, such as this oval overprint from a concern in Guadalajara.