The Mexican Revolution was full of paradoxes. An example of these were the Obligaciones Provisionales del Erario Federal (provisional promissory notes of the federal treasury), aka “Carbajal (sic) bonds”. In a period where one side disqualified and did not recognize what the other was doing, paradoxically this single issue linked a few of them; it was planned by Victoriano Huerta, put into circulation by Francisco Carvajal and, finally, recognized and withdrawn by Venustiano Carranza.

On 2 July 1914 the Chamber of Deputies discussed and approved a bill submitted by the Secretary of Finance and Public Treasury, Adolfo de la Lama, to issue “six percent Mexican gold amortizable bonds of 1914”. These bonds were intended to fulfill the financial commitments and maturities of railway bonds, domestic debt, irrigation and agricultural works; the debt service repayment; the payment of salaries to public officials and, to meet the extraordinary expenses Victoriano Huerta’s government was incurring to fight the revolutionary uprising.

Four days later, the Official Gazette published the decree of the Law authorizing the issue of 60 million pesos in 6% amortizable bonds, as well as the so-called Obligaciones Provisionales del Erario Federal. This would be a 10-year internal debt guaranteed with the revenue of the stamp tax. The Treasury would issue these bonds and repay them to the bearer on demand with gold currency, twice a year, in Mexico City, London and other places defined by the government.

The Ministry of Finance was in charge of defining the features carried by these bonds, such as the values, numbers, letters, colours and security codes to ensure their use and authenticity. On 8 July the Official Gazette published the secondary regulation which covered five types of bonds:

In accordance with the Law and its Regulations, on the obverse, these bonds should bear the signature of the federal treasurer and the assistant treasurer, and on the reverse, a selection of the main articles of the 6 July Law (1st, 2nd, 3rd, 5th, 6th, 7th, 8th and 10th). Each bond would have twenty coupons for the same number of semesters with the amount and expiration date.

While they were printed, which was customary to be done at one of the largest security printers in the USA, such as the American Bank Note Company, the Law considered issuing provisional certificates, printed by the Stamp Printing Offi ce located at the National Palace in Mexico City. These certificates would be exchanged for the definite bonds when they were ready.

According to the same Law, the bonds could serve as a guarantee for issuing 10 million pesos monthly in Obligaciones Provisionales del Erario Federal, up to 85% of the total bond issue. These promissory notes would be unlimited legal tender documents of forced circulation promising to pay to the bearer on demand 1, 5, 25 or 50 pesos each. Once again, the Ministry of Finance was responsible for determining the values, features, security codes, etc. The regulation specifi ed that the Obligaciones Provisionales should be printed, engraved or lithographed on special paper with similar dimensions to banknotes.

I am not aware of the existence of bonds - or at least specimen bonds - printed by a US security printing firm; most likely, officials did not have time to request them, but at the Historical Fund of the Treasury of the Federation there is a book with the provisional certificates issued during the brief presidency of Carvajal. As per the stubs on those books, there were only seven issued, between 25 and 31 July. They have the autographed signatures of the treasurer Gonzalo Manero, and of the sub-treasurer Francisco P. Montes de Oca, who took up his office on the 23rd of that same month.

On the same date, President Carvajal issued a memorandum modifying two articles from the secondary regulation, distributing the denomination according to the following criteria:

The main vignette on the Obligaciones Provisionales consists in an eagle perched on a prickly pear cactus devouring a rattlesnake, surrounded by the legend “Estados Unidos Mexicanos”. The ornamented margins include the denomination in number on six different places and the main legend says:

“provisional promissory notes of the federal treasury. Letter ... – Serial Number ... – The Treasury of the Federation Will pay to the bearer … Pesos (in number and letter). – This promissory note is guaranteed for the same amount by the six percent Mexican gold amortizable bonds – 1914 –10 years, according to the decree issued on 6 July, 1914, and will be redeemed in the terms of such decree. – Mexico, 25 July 1914.”

Below the legend, the complete signature of the treasurer Gonzalo Manero and the manuscript name of the assistant treasurer Francisco P. Montes de Oca with their respective titles are printed. All denominations have slightly perceptible backgrounds in different colors, while margin designs, rosettes and texts are printed in black ink, except for the folio, the complementary number of each series (only on the one and five pesos), and a small rosette with the name of the Exchange and Currency Commission which are printed in red. Below the margin, the name of the Stamp Printing Office – Mexico appears centered.

The reverse is printed in different colors for all denominations. The margin is decorated with rosettes in the four corners with the denomination. Within the margin, there is a text box with an oval countersign consisting in a rosette with the word Mexico and the names of the Ministry of Finance and the Treasury of the Federation, with the imprint Government Printing Office in micro-letters, and the legend “this promissory note is of obligatory admission across the Republic and for all kinds of payments, and consequently, it is of legal tender for any kind of obligations, including the payment of taxes to the Federation, the States and the Municipalities.”

Apparently only a fraction of the Obligaciones Provisionales from the abovementioned memorandum were issued, since Carvajal left the presidency on 13 August 1914, when the revolutionary forces seemed to take control of most of the territory.

Before the split of the revolutionary forces at the Convention of Aguascalientes, which separated the Constitucionalistas led by Venustiano Carranza from the other leaders which defended the Convention, the acting Secretary of Finance, Felicitos Villarreal, presented a plan to Carranza suggesting that the “Carbajal bonds” should not be recognized. Although in an interview with El País Villarreal said that he was studying the subject and his personal opinion was that they should continue to circulate until a decision was takenEl País, Tomo I, Año XIV, Núm. 4657 ,22 August 1914. Villarreal ended up as the Finance Secretary for the Conventionista faction, but I have not located any decree or memo from that side validating or nullifying this issue. However, Carranza did maintain the forced nature of the Obligaciones Provisionales to avoid a negative eff ect on the most vulnerable people; On 15 October, El Constitucionalista, the official gazette of the Constitutionalist government, published a statement by José J. Reynoso, then Undersecretary of the Treasury, who said that in order to avoid losses to the population, he would recognize the Obligaciones of 1, 5 and 50 pesos; and a week later he also mentioned those of 25 pesos in the following amounts:

It is common to find decrees of local authorities that reproduced those of Carranza recognizing these bonos among other issues. Curiously, it seems that at least one of them went further and revalidated them with a circular seal stating REVALIDADO. So far, I have not located more information about these revalidated notes.

This issue not only experienced a recognition problem from the different authorities, but also a lack of confidenceand acceptance from the general population. By late August the Obligaciones were being refused by shopkeepers and anxious people crowded the Tesorería General in an attempt to get them changed for Constitutionalist notes. In early October, amid rumors that counterfeit bonos were circulating a newspaper held an interview with Undersecretary José J. Reynoso who said that this was a mistake. His department had issued the serial numbers of the bonos that had not been put into circulation and this was misread as counterfeit. In fact only $5,170,000 had been issued and was mainly in the hands of the poorer classes. These were expected to disappear quite quickly as they would be exchanged for Gobierno Provisional de México notesBoletin Militar, Guadalajara, Tomo II, Núm. 71, 7 October 1914. The notes were still being refused by some, especially foreign, stores but Reynoso reiterated that, while the new currency was issued, they were of forced circulation but were gradually being withdrawnNueva Patria, 9 October 1914. In the Ministry of Finance’s memoirs there is a memo from Reynoso to the manager of Mexico’s electric trams company, clarifying that there had been no forgeries of this issue and, therefore, there was no reason for the drivers to refuse them. Furthermore, he recommended not to be guided by the serial number, but by the security mark at the reverse, which constituted an anti-forgery measure that helped to authenticate them.

In fact, the mark that Reynoso referred to is interesting in itself, as it links another faction during the revolution. It not only appears on the Obligaciones Provisionales issued by the government of Carvajal, but also on Carranza’s Mexico City Provisional Government issue, and on some notes issued by the Conventionistas. These three issues were produced and stamped by the Treasury Printing Office; most likely the Constitutionalistas did not have time to prepare another stamp to validate their issue and used the one they found in the printing offi ce when they took Mexico City. Possibly, the cliché was left by this faction when they moved to Veracruz at the schism on the Convention and then was recovered and used by the Conventionistas when they occupied Mexico City and subsequently moved to Cuernavaca. 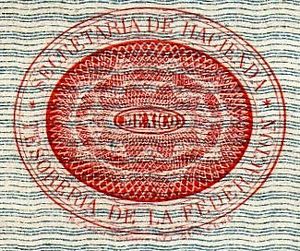 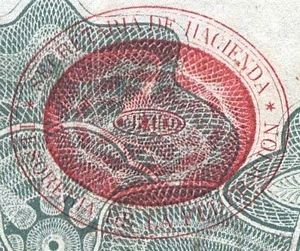 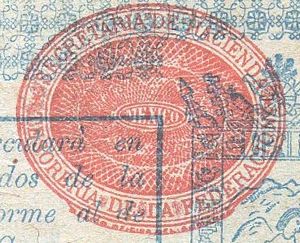 On 27 March 1915, Carranza listed the Obligaciones Provisionales among the issues that would cease to be legal tender as of 1 July of that same year, a date extended to September 30 by another decree of 19 June LINK /documents/veracruz/veracruz-19150619. Then, the Obligaciones Provisionales were to be exchanged by the General Treasury and other offi ces defined by the Ministry of Finance. Nevertheless, apparently they kept in circulation for some months.

In 1916, when Carranza was about to launch the so-called infalsificables, in a decree dated 28 April he again listed all listed all the issues that his government would redeem, and the “Carbajal bonds” were once again among them. All these notes were to be deposited at the General Treasury, the Treasury Headquarters and the Main Stamp Revenue Administration by 30 June 1916 for later exchange. The holders had to carry three copies of the list of notes to be exchanged, one would be returned to the holder of the notes, another would remain at the collecting office and one more would accompany the notes which were sent to the Monetary Commission for its revision, cancellation and the authorization of the exchange. There might be somewhere a file in an archive which includes the number of Obligaciones Provisionales redeemed and destroyed.

This is how this brief issue connects characters as antagonistic as Huerta and Carranza and its features are common with the old regime and to opposing factions such as the Constitutionalistas and the Conventionistas, showing some of the many paradoxes of the Mexican Revolution.

The counterfeit Obligaciones could not be distinguished, even by the greatest experts, but luckily the bonos had not been put into circulation as they had only managed to do the designs, photographs and other preparationsEl Renovador, 3 July 1915. The newspaper article has photos of the workshop and blowups of one of the bonos and of the Secretaría de Hacienda seal.