These pieces have appeared recently at auctions and so are worth mentioning. However, though they are printed on paper and have the dimensions of a banknote, and have specific denominations, they were not negotiable or circulated, and so they are not true paper money. Rather they belong to the category that Gaytan labelled “Similar - Connected - Related" and nowadays is referred to as Exonumia.

These vales arise from the financial problems that Mexico suffered in its early years. On 2 March 1835 the interim President, Miguel Barragán, decreed the creation of vales de amortización to be used to settle outstanding debts and vales del alcance de sueldo to pay salaries and pensions.

The decree specified that all the credits against the federal treasury from loans or contracts concluded with the Government from 1 January 1832 until 18 November 1834, which had not been amortised, should be presented to the General Treasury of the Federation, within two months, so that they could be revalidated. Vales de amortización in four different classes were to be created to amortise these credits The four classes were issued for different types of debt.

These vales were to be accepted by all state and federal offices for any payment that had to be made, though they were only accepted for part of the payment with the rest required in hard cash. 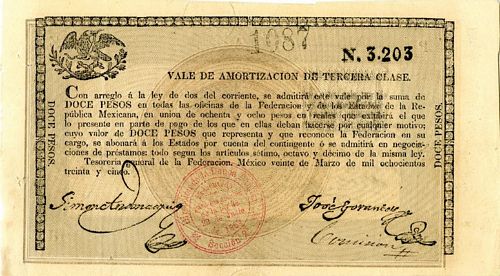 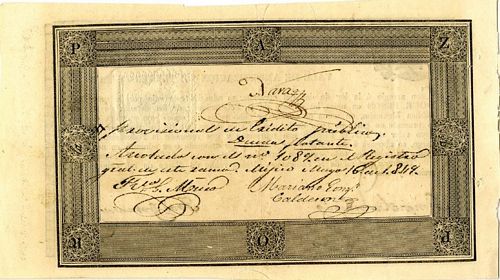 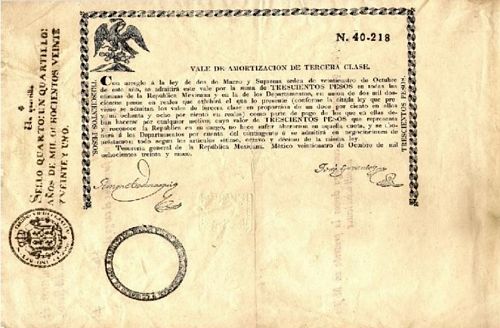 On 20 January 1836 interim President Miguel Barragán assigned 15% of the receipts from the maritime Customs to pay off all government liabilities, including these vales de amortización.

These vales were to be given as part payment of salaries to public servants, civil servants, those in military offices, retirees and pensioners, including those of Monte Pio, and of the Federation.

Article 12 of the decree states that the vales de alcance de sueldo issued by the managers of offices would carry the visa in the Federal District of the Ministros de la Tesorería general, in the states of the governors and in the territories of the jefes politicos. 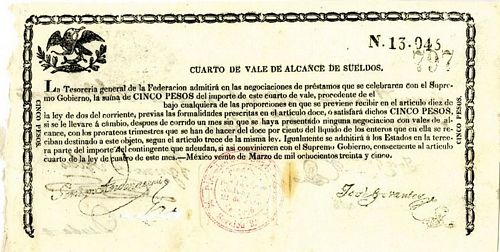 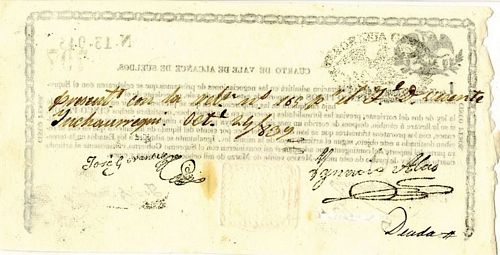 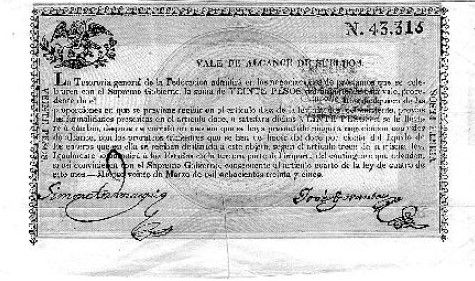 These certificates also carry the signatures of Simón Andonaegui and José Govantes on the face and of José Govantes and Ignacio Alas on the reverse.

Various vales de alcance of different denominations were signed by Javier Aznares as $1,300 worth was stolen from a warehouseEl Mosquito Mexicano, 20 October 1837.

On 5 October 1835 interim President Miguel Barragán announced that these vales de alcance would be accepted by all government office in 15% payment of any liability. Two days later he added various conditions to ensure against deceit, including that they be endorsed on the reverse.

On 18 September 1839 President Anastasio Bustamante decreed that the fund that had been created by the law of 20 January 1836 could now be used to pay vales de alcance. Finally, on 16 January 1841 Bustamante declared that the vales would no longer be accepted. Any still outstanding could be exchanged for certificates, that would gradually be redeemed.