The bank was founded on 6 September 1890 by Carlos Bracho and Juan González Asunsolo with a capitalisation of $500,000 and began operating on 1 June 1891. The original shareholders and their holdings were as follows:

Following the Ley General de Instituciones de Crédito on 18 September 1897 the bank modified its concession and was given five years in which to withdraw all its $1 notes.

The bank’s first premises were at 2ª calle de Teresas (today calle Juárez) 14, a property owned by Toribio Bracho de la Bárcena, one of the main shareholders. This proved insufficient so on 1 January 1904 the bank moved into new premises on the corner of calle Constitución and calle Mayor (now calle 20 de Noviembre). "The building which is being erected at Durango for the Banco de Durango, is said to be one which, when finished, will not be excelled by any other bank building of the republic. The building will be two stories, the lower one being entirely devoted to the bank’s offices, arrange in the most commodious and convenient way. There is a large burglar and fire proof vault. The outside is of Renaissance architecture, with pretty railings for the windows and balconies. The upper storey is to be the residence of Manager Francisco Asunsolo, who is also a stockholder. This building, which will cost about $200,000 will contribute largely to the beauty of Durango. It will be entirely finished within six months"The Mexican Herald, 14 March 1903. 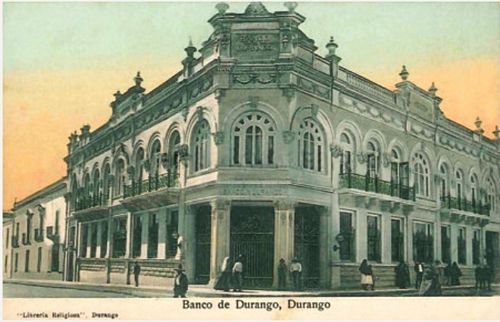 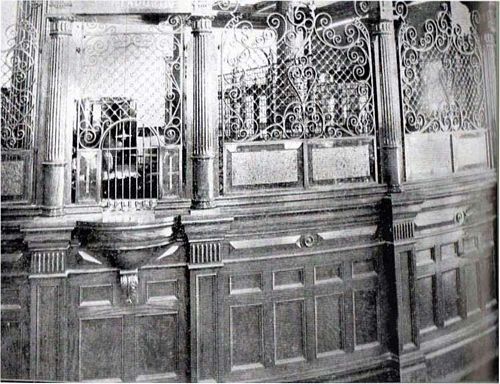 The American Bank Note Company produced the following notes. It engraved two special vignettes: a view of the cathedral (C 420) for the $10 note and the Cerro de Mercado (C 419) for the $20 note.

Originally the series letter was engraved on all the plates but from 1899 it was typographed.

In December 1910 the ABNC engraved new face plates for the $50 and $100 notes. These were slightly smaller than the previous ones.

Before 1914 on $5 notes the text "Pagará a la Vista" is at the upper left and the serial number is on the right side only: for 1914 the text was moved to the lower centre to make space for serial numbers on both the left and right sides. The ABNC also engraved a special vignette of the bank building (C 1376) for a new $500 note.

At the beginning of April 1913 Gustavo Sáens de Sicilia was named Interventor by Huerta in substitution for Emiliano G. Saravia. He was to have taken up his appointment as soon as communications were restored with the city, but they never were, so he operated from Mexico CityFigaro, Tomo I, Núm. 29, 3 April 1913.

On 26 July 1913 the Jefe del Estado Mayor of the Tercera Brigada, Mayor Felíx Puron, asked for permission to appoint José Martínez R., who had been employed by the Banco Nacional de México when it set up in Durango, as Interventor since the former Interventor had left the city, but was told that was a matter for the Gobierno GeneralADUR, Fondo Secretaria General de Gobierno (Siglo XX), Sección 6 Gobierno, Serie 6.7 Correspondencia, caja 6, nombre 8. However, following Carranza’s ultimatum to the banks in his area, on 24 February 1914 Pastor Rouaix took possession of the Banco de Durango and Banco Nacional de MéxicoEl Demócrata, 25 February 1914 and ordered Leonardo Pescador and Carlos G. Saravia to carry out a detailed inventoryADUR, Libro Copiador 267, Hacienda 11 July 1913 - 25 April 1914, pp.811-815. The branch of the Banco de Durango in Gómez Palacio was taken over by Coronel Mateo Almanza, Jefe de Confiscaciones, in April 1914ADUR, Libro Copiador 314, Telegramas 7 December 1915 - 15 January 1918, p119.

In May 1914 Bouligny and Schmidt produced $5 and $10 notes. The bank had only just received 25,000 $10 notes from the ABNC, which demonstrates how quickly the number of banknotes in circulation grew.

Due to the revolution the bank closed its doors in October 1914. Following the establishment of the Comisión Reguladora e Inspectora de Instituciones de Crédito its Inspector, Rafael Herrera y Lasso, interviewed the bank’s manager, Manuel de Urquidi, at their lawyer’s offices in Mexico City on 3 December 1915. As the bank could not produce the required documentation about its financial status, the Comisión declared its concession invalid.

Under Obregón's decree of 31 January 1921 the bank was placed into Class A (for banks whose assets were greater than their liabilities) and allowed to resume all customary operations except the issue of bank notes.The bank was finally liquidated in 1930.