First attempts to establish a bank of issue in Durango

This Banco del Estado de Durango produced notes “with the authorization of the legislature of Durango” and “redeemable in hard cash on presentation” in January 1882. A few examples of three denominations (25c, 50c and one peso) are known, mostly as remainders, printed by H. S. Crocker and Co. of San FranciscoHenry Smith Crocker (1832 – 18 July 1904) was an American printer, publisher, and railroad investor active in northern California in the middle to late 19th century. Crocker followed the Gold Rush to California, settling in Sacramento in the 1850s. He established his printing concern, H. S. Crocker, in 1856. Apparently his first office was little more than a tent with a small sign. Crocker relocated to San Francisco in 1871. He became extremely wealthy almost overnight by leveraging his ties to the Central Pacific Railroad (his brother Charles Crocker was one of the founders). In 1885, Crocker constructed a large five-story printing factory at 215-219 Bush Street, powered by his own private steam plant, then the largest and most sophisticated printing concern on the west coast. Crocker's prosperity continued and by the time he died in 1904, he was the head of a large and extremely wealthy family.. The only recorded numbered notes are three $1 notes, numbered 1, 10000 and 20000, all unsigned and so specimensRichard A. Long, Mail Auction Sale, 30 November 1974. 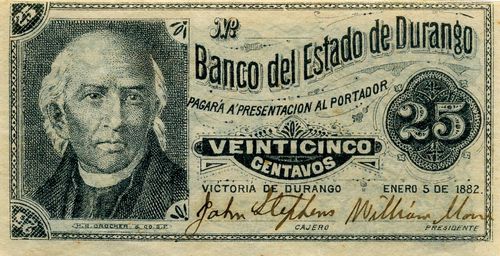 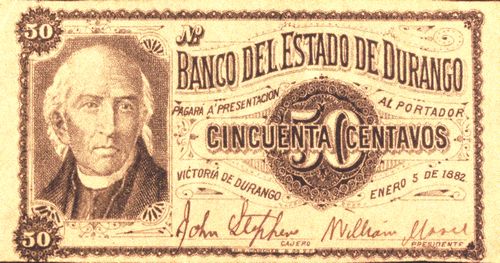 Some notes are known signed by William Moore as President and John Stephens as Cashier but, as they are unnumbered, they would not have been issued.

In the American Bank Note Company’ archives is a folder containing a single letter dated 15 January 1919 from Edward Maurer Co Inc of New York. It reads: In clearing out our vault we find fourteen bank note proofs of Mexican money on the back of which appears your stamp – “This design is the property of the American Bank Note Co. and must be returned within 30 days.” Undoubtedly these have been with us for many years and we would ask if you desire them returned now. We will deliver them to your messenger or if they are no use we will destroy them.” Below an official of the ABNC has added the handwritten comment: "January 17. 19 This firm handed me to-day 14 models representing a prospective issue of 7 denomns made by us for Banco de Guadiana, Durango Mex. some time in the 1880s."ABNC.

Apparently, Edward Maurer was born in Switzerland, moved from Mexico to New York in 1886 and joined Theo. Herrmann, one of the oldest export houses in New York. Leaving Mr. Herrmann in 1895, Mr. Maurer started business in his own name and later took over his former employer’s firm. Around 1905 he became interested with Madero & Co., of Mexico, in the extraction of guayule rubber and represented them exclusively in the United States and Canada. By 1918 the firm was exporting to Mexico, Central and South America, the West Indies, East Indies and Europe and importing raw materials from these countries.

So Maurer’s company had taken on the commission of organizing an issue of banknotes (or paper money) but for whom? The proposed name and the requirement for seven denominations (say, from 25c to $50 or from $1 to $500) suggests a putative bank or a commercial house intending to offer banking services rather than a mining company, a hacienda or firm like La Fábrica “El Tunal”.

One possiility is Juan Francis Brittingham, the American capitalist who built up an industrial empire centred on Gómez Palacio, Durango. Though he moved there from Chihuahua in 1893, a decade later than the ABNC suggests for the models, this later date is more in line with Maurer’s own career. Amongst Brittingham’s business partners were Patricio Milmo, who had his own private bank (and notes) in Monterrey, Nuevo León, and the Creels and Terrazas from Chihuahua, who controlled the Chihuahua banks. Brittingham had interests in the local branches of the Banco de Durango, the Bancos Minero and Comercial of Chihuahua and the Banco de La Laguna so might have decided that that was a better long-term strategy, or he might have been stymied by the development of Federal banking regulation in the 1880s.