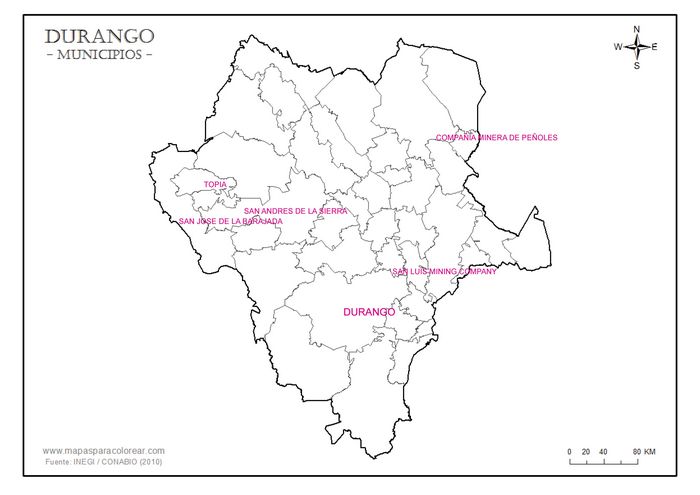 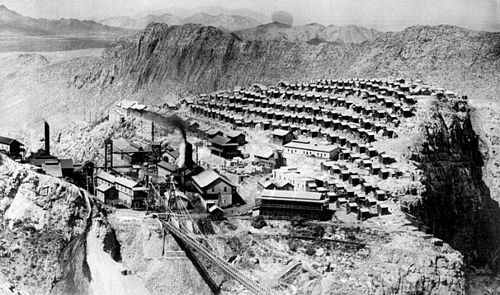 The Compañía Minera de Peñoles was reported to have been organized in March 1887. It later took over a small operation at Ojuela, which is located high on a mountain about six miles south of the town of Mapimí, itself about 30 miles north of Torreón. The company appeared to be well funded and development proceeded rapidly. They first built a 17 mile railroad from the main line of the Mexican Central at Bermejillo to a site just east of the village of Mapimí where a large smelter was constructed, and then a rack railroad to the mineGeorge E. Hoke, “The Railroads of the Compañía Minera de Peñoles”.

The town had 5,000 inhabitants and a wide range of facilities, including three tiendas de raya strategically placed around the area, where the miners could purchase all basic necessities, according to Southworth, at moderate pricesJ. R. Southworth, Las Minas en México, Secretaría de Fomento, Colonización, Industria y Comercio, México, D.F., 1905.

However, despite the bonanza, there were problems with the workers. In January 1898 the newspaper La Evolución accused the company of paying in notes (moneda de cartoncillo) which the company issued and which were only accepted in the three tiendas de raya. 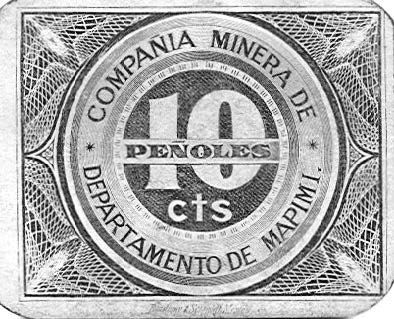 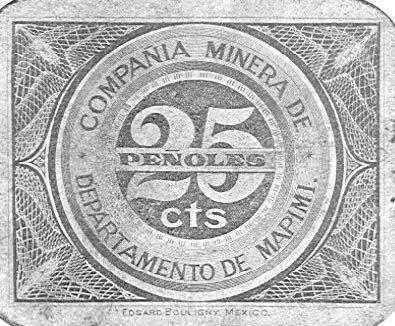 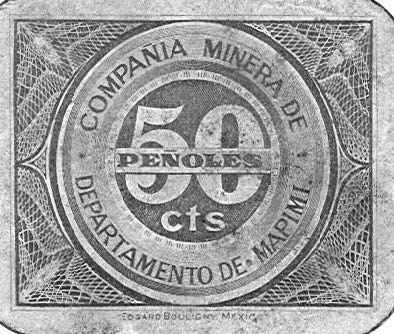 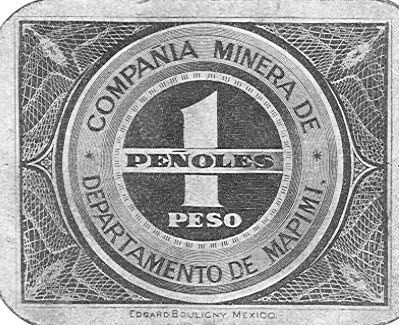 These four denominations, since they are printed by Edgard Bouligny, date from before 1896. However, the company also resorted to the use of vales during the Revolution.

Among the archives that were thrown into landfill by the new owners of the American Bank Note Company was correspondence from 1910-1921 on notes for the Compañía Minera de PeñolesABNC, 40331.00.

Topia is a remote municipality in the north-western corner of the state. Mining in the region pre-dates European colonization and was first reported in the Topia area in 1538. The first mineral concessions were granted at Topia in the early 1600s but there was little mining for two centuries. Then, production during the period from 1870 until the Mexican Revolution was reportedly between $10 million and $20 million (equivalent to between 15 and 30 million oz silver plus gold, lead and zinc). 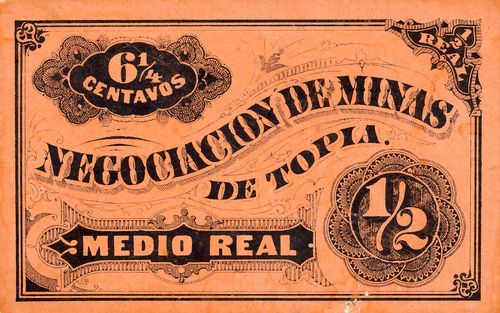 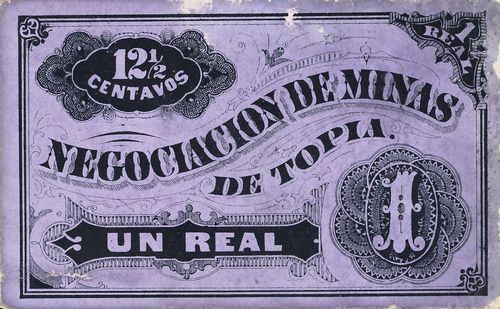 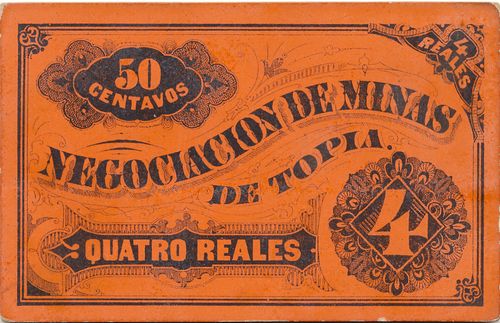 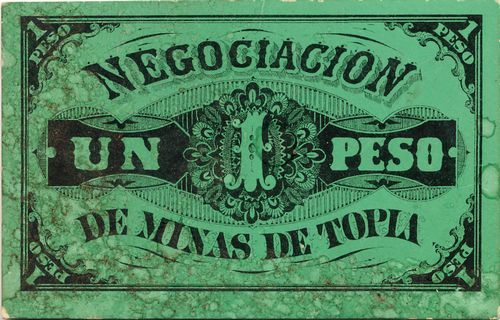 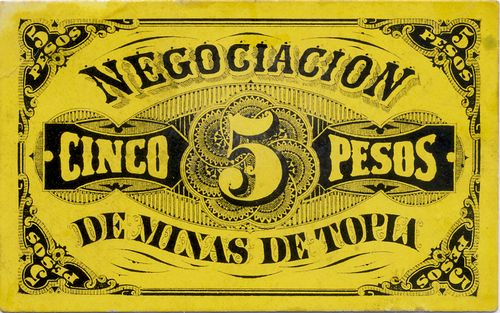 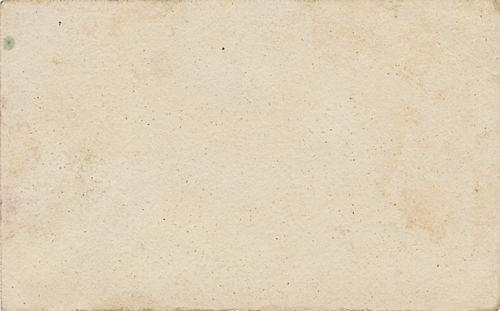 As these notes are denominated in both the reales and decimal system they date from the 1870s or 1880s. Dick Long once owned a piece with the stamp 'Negociación Minera de Salvador López y Cía, Topia - MERCANCIA - Ago 16, 1887' on the reverse.

This company also resorted to vales in 1913. 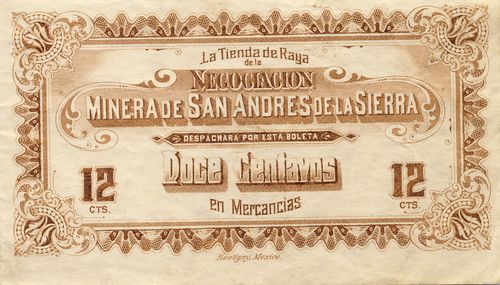 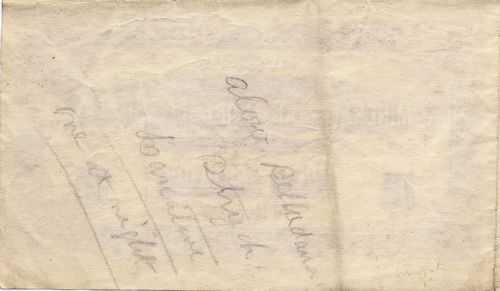 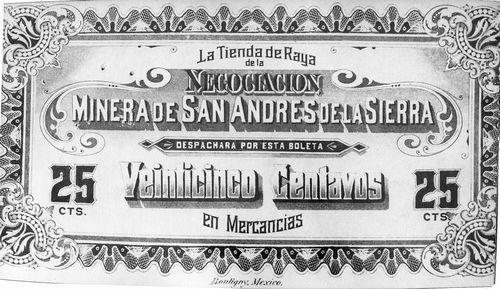 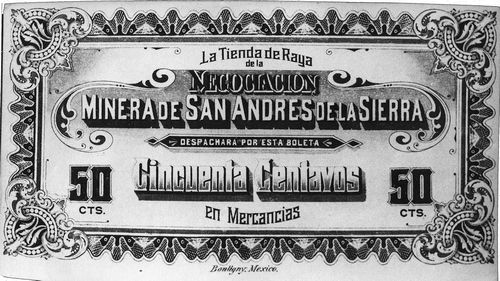 We know of a series of notes issued by the company's tienda de raya. Again the 12c denomination hints towards a time when the reales system was still in use. As the printer’s imprint is ‘Bouligny, Mexico’ and not the later ‘Bouligny & Schmidt’ these can probably be dated to between 1890 and 1896 (when Carlos Schmidt joined the firm).

In 1890 the company employed 1,282 men with a weekly payroll of between $5,000 and $6,000Memoria de la Secretaría de Fomento, [   ]. In October 1899 it was reported that people in San Andrés de la Sierra were complaining that this company made their payroll every six weeks with the object of forcing workers to take out credit with the tienda de raya. A Mexico City newspaper hoped that this terrible injustice would be remediedEl Popular, Mexico, 13 October 1899.

The Negociación Minera de San José de la Bajada was in the municipality of Tamazula, Durango. 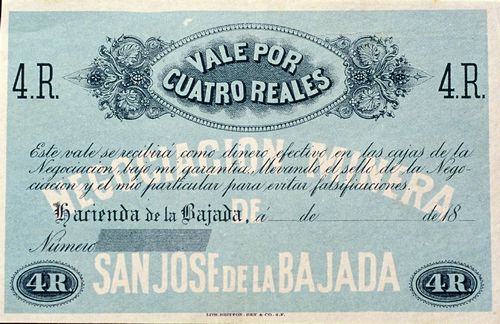 We know of a vale for four reales with the text stating that it would be accepted as cash, provided it carry the stamps of the company and the signatory in order to avoid counterfeits (Este vale recibirá como dinero efectivo en las cajas de la Negociación bajo mi garantia, llevando el sello de la Negociación y el mio particular para evitar falsificaciones).

These were printed by Britton, Rey & Co., a well-established lithography firm located in San Francisco, California. 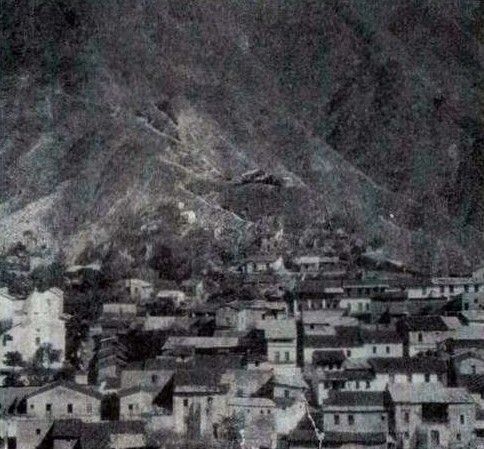 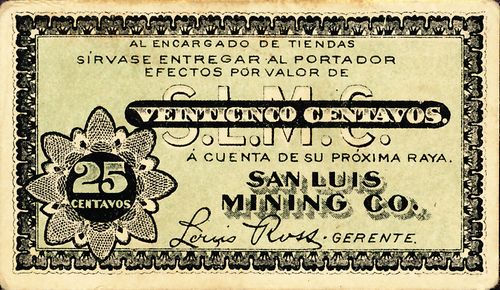 The San Luis Mining Company's mine was situated in Panucho del Coronado, north-east of the capital. This advance on wages, redeemable in goods in the company's (?) stores, has the signature of Louis Ross as Gerente (manager).

This list of companies is not, of course, exhaustive and all the examples to date are unissued remainders. No one (except a early collector such as Juan Andrew Creel, the manager of the Banco Minero) had any incentive to leave scrip behind. Demanders of such currency would not regard it as a store of value for any time longer than the period between paydays. Suppliers, to whom the scrip was an outstanding obligation, would redeem it first if they liquidated, merged, or closed down their enterprises. In addition, everyone who used it and benefited from it was aware of its questionable legality. Indeed, the main party interested in such scrip, apart from the issuers, was the local authorities who had to administer (or appear to adminster) the law.