The revolucionaries finally took Guanajuato on 29 July 1914 and brought with them the various Constitutionalist and Villista issues: then in December Guanajuato followed the Convention in disowning Carranza and his issues.

On 5 March 1915, the local authority (Presidencia Municipal) was authorised[text needed] to issue $6,000 in 1c, 5c and 10c fractional notesEl Observador, Guanajuato, 5 March 1915. These had a common template with the denomination, series letter and number on the face, and city coat-of-arms, denomination and signatures on the reverse, applied in a series of passes. Some of these had the stamped names of the President, Teniente Coronel Manuel R. Rubi and Secretary, Agustín Téllez, and others that of Luis Lozano, who was in charge of the municipal treasury. 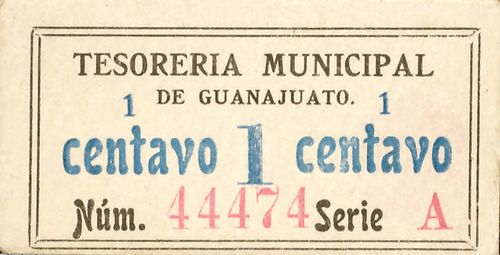 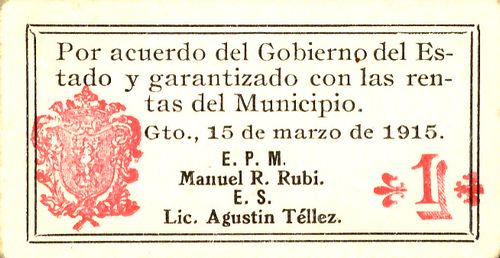 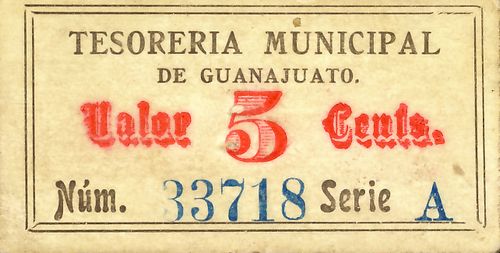 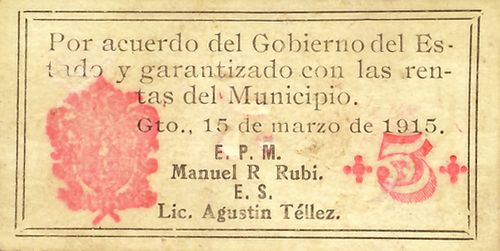 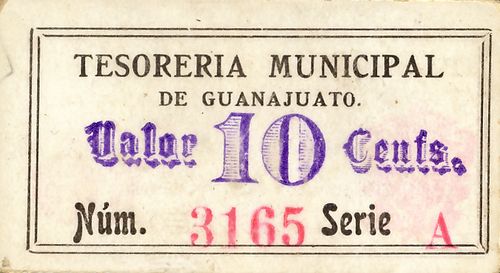 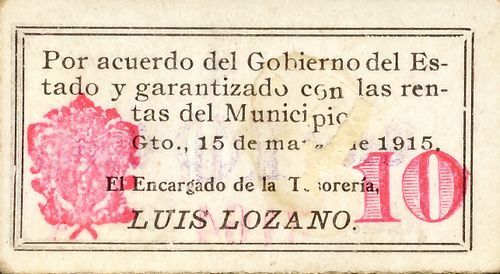 On 1 July the Presidencia Municipal informed the public that since the Villista troops, when they occupied the city on 6 – 12 June, had made off with the $$6,000 that had guaranteed this issue, they were worthless and the Treasury was relieved of any duty to honour themCrispín Espinosa, Efemérides Guanajuatenses, 1917, which seems a bit harsh. The next day it announced that the Cámara de Comercio (Chamber of Commerce), having deposited a sum in the Treasury, was going to issue 5c, 10c, 25c and 50c notes, to a total value of $18,600Crispín Espinosa, Efemérides Guanajuatenses, 1917.

On 14 August, according to EspinosaCrispín Espinosa, Efemérides Guanajuatenses, 1917, the Chamber of Commerce put up a notice[text needed] about 1c notes (fichas por valor de un centavo) but it is not known to what this referred. Perhaps it was to one of the denominations of this issue.