While in Guadalajara, Jalisco, Obregón had the resources to produce a better class of note for the Cuerpo del Noroeste than the earlier ones from Culiacán and Tepic. On 1 August 1914 he issued a series of five denominations (50c, $1, $5, $10 and $20), as Series C, signed by himself and Francisco Serrano, now a teniente coronel. 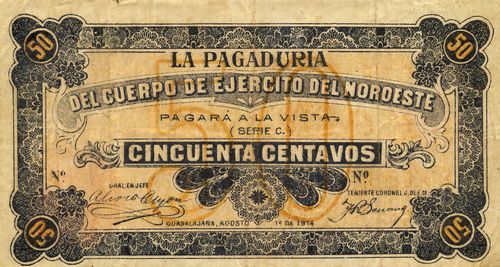 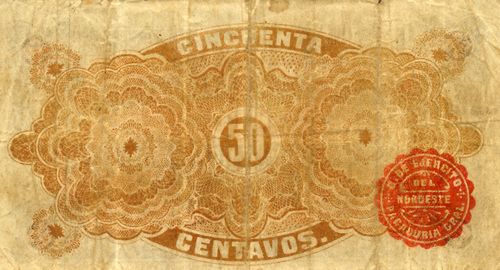 These were printed by the local firm Litografía de Ancira, with the design made by one of their employees, Luis Vázquez Foncerrada. The two vignettes of Madero and the gun crew were based on photographs by Jesús H. Abitia. Abitia was in fact a childhood friend of Obregón and an early supporter of Madero. After the decena trágica (which he photographed) he fled to Sonora where he was designated, first by Obregón and then by Carranza, the ‘official’ photographer of Constitutionalism. He followed the Constitutionalist forces documenting the battles, the triumphs, the camp life, and, above all, Carranza and Obregón. The vignette on the reverse of these notes is of a group of artillerymen with the cannon “Zaragoza” which sunk the Huertista gunship Morelos off the Isla de la Piedra, Mazatlán in May 1914. 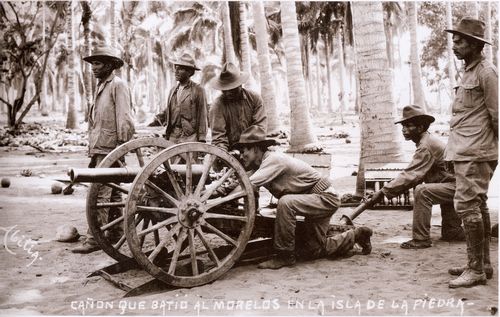 As a general, Obregón participated in the Convention at Aguascalientes but when forced to choose sides, he naturally sided with Carranza and left to fight for the Primer Jefe.

On 6 November it was announced that these notes would be collected by the Tesorería General de la Federación. Anybody holding the notes could exchange them for notes of the new issue without a discountThe Mexican Herald, 6 November 1914; Boletín Militar, Tomo II, Núm. 97, 6 November 1914: Boletín Militar, Tomo II, Núm. 99, 8 November 1914. This was confirmed on 8 December when Carranza included this issue among the ones that were to be withdrawn, from 1 April 1915 they would cease to have legal tender and in the meantime the Tesorería de la Federación would effect their withdrawal but they would still remain in use.

On 18 January 1915 General Manuel Diéguez recaptured Guadalajara from the troops that Villa had left behind: then Villa defeated Diéguez and on 13 February reoccupied the city. Diéguez then retook the city on 18 April. Maintaining a large army placed a great strain on resources and so on 1 May 1915 the Pagaduría General del Cuerpo del Noroeste produced a similar series in the same five denominations (50c, $1, $5, $10 and $20) but as Series D and with differences in the legend (PAGADURIA GRAL. instead of PAGADURIA) and text (Serrano is now a general), edging, Madero’s portrait and the allegory of Patria. 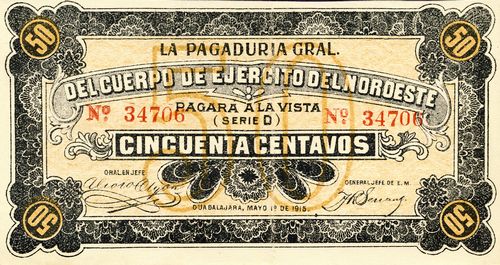 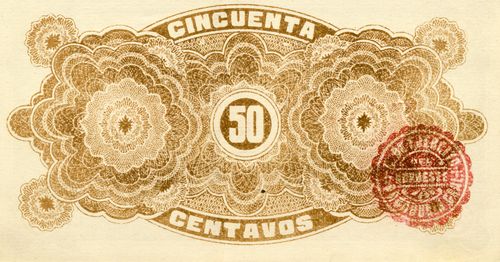 Despite a statement in September that all the 50c notes were goodBoletín Militar, Tomo III, Núm. 260, 5 September 1915 in November the police found a group of counterfeiters of this value, led by the brothers Sebastían and José Gómez, of calle del Cementario 256Boletín Militar, Tomo III, Núm. 310, 4 November 1915. The others were Pedro Ramírez, Salvador Rodríguez and María Mercedes García .

On 5 November 1914 it was reported that the Secretaría de Hacienda, wanting to carry out the provision recently issued on the amortization of paper money issued by the Ejército Constitutionalista and regulation of banknotes[which? text needed], had agreed to begin exchanging the paper money issued by Obregón in Jalisco for that "just issued by the Caja de la Federación" (the Gobierno Provisional de México). It had therefore ordered for the exchange be made in the Tesorería General and would arrange for it in the Jefaturas de Hacienda in the statesMéxico Libre, 87, 6 November 1914.

As noted, on 8 December 1914 Carranza had decreed that, as issues were being made without his authorization, it was convenient to unify the currency and determine precisely what obligations the government had undertaken. From 1 April 1915 certain issues would cease to be legal tender and would in time be exchanged by the Tesorería de la Federación. Carranza included in his list the notes issued by Obregón and Serrano on 1 August 1914.

However, in mid-March 1915 the governor of Querétaro told the public that, by order of the Secretaría de Hacienda, the notes issued by Obregón in Culiacán, in May 1914, were of forced circulationLa Sombra de Arteaga, Tomo XLIX, Núm. 9, 18 March 1915.

On 28 June Carranza, in his circular núm. 28, stating that the need for the fractional notes (10c, 20c and 50c) of the Cuerpo de Ejército del Noreste had passed, ordered that they be exchanged in the Tesorería General de la Nación for other Constitutionalist notes. This circular was reprinted in the Boletin Militar of 25 September.

As soon as communications were reestablished between Guadalajara and Mexico City the notes of Obregón’s May 1915 began to arrive in the capital. As they were not mentioned in the various circulars and dispositions of the Secretaría de Hacienda businesses and public offices refused them. On 30 August C. López de Lara, Governor of the Federal District, asked Carranza in Veracruz for instructions and on 2 September Carranza replied that they should be exchanged in the all the government finance offices for Veracruz issuesThe Mexican Herald, Año XXI, No. 7290, 5 September 1915. The exchange started immediatelyThe Mexican Herald, Año XX, No. 7293, 8 September 1915.

Once he had defeated most of his enemies, Carranza could be more specific. On 28 April 1916, as part of the move to introduce a unified currency, he listed various issues that would be accepted until 30 June on deposit by the Tesorería General de la Nación, Jefaturas de Hacienda and Administraciones Principales del Timbre. Naturally, the list now included both the first issue of 1 August 1914 and the second of 1 May 1915. After 30 June the notes would be null and void. An American stationed in Guadalajara recorded the effect this decree had on the Obregón issues: “One of the effects of this edict was to throw out of circulation at once all the Obregon and Dieguez money which, on account of one of the many former financial edicts requiring all other kinds of revolutionary money except the Obregon-Dieguez issues to “resellado” (restamped), had become the favorite money here. This favoritism for the Obregon and Dieguez money was heightened from the fact that such a large percentage of the money which had to be “resellado” was being declared “falso” (counterfeit) by the government agents. Therefore, when the Obregon and Dieguez money was suddenly thrown out of circulation by said edict, many, and especially the market people and wage earners, were caught with hardly any other kind of money in their possession. Moreover, nearly all the subsidiary bills used here for small change were of these issues. Hence thousands of people awoke on Wednesday morning, the 3rd of May, and found themselves unable to purchase in the markets of the city as much as a day’s rations. And there was not offered any relief ahead than the promise by the government that after the 30th of June they might deposit with the government’s agents such money as was yet permitted to circulate and receive – something in the future – one infalsificable pesos for every two of the old"Will B. Davis, Experiences and Observations of an American Consular Officer during the recent Mexican Revolutions, 1920, p234.

On 24 July 1916 Carranza decreed that from 1 August they would exchange the notes listed in the decree of 28 April that had been deposited in the offices of Hacienda with infalsificables at a rate of 10 to 1.

On 1 March 1915 the provisional governor of Querétaro Gustavo M. Bravo, asked Villa’s Secretaría de Hacienda in Chihuahua whether notes issued by the División del Noroeste in Guadalajara in May 1914 were of forced circulation because businesses and the public offices were uncertainAQ, Fondo Poder Ejecutivo Sec 2ª Hacienda C-1 Año 1915 Exp. 142. On 5 March Chihuahua replied that notes issued by Obregón in Culiacán and Guadalajara before his rebellion were, in principle, valid. It was necessary to amortize such notes so they should be accepted in payment of taxes, cancelled and sent at the first opportunity to Chihuahua for incinerationAQ, Fondo Poder Ejecutivo Sec 2ª Hacienda C-1 Año 1915 Exp. 144. This information was published in the Períodico OficialLa Sombra de Arteaga, Tomo XLIX, Núm. 9, 18 March 1915 and forwarded to the various offices such as the Express Constitucionalista, which apparently was refusing to take these notesAQ, Fondo Poder Ejecutivo Sec 2ª Hacienda C-1 Año 1915 Exp. 144 letter Secretario General to Gerente del Express Constitucionalista, 23 March 1915. The manager replied that he had only refused the notes because he had received instructions to that effect from the Tesorero General of the Ferrocarriles Constitucionalistas de Mexico. He listed various letters and circulars, namely circular núm. 3 issued in Torreón, 9 September 1914; circular núm. 9 issued in Mexico City, 15 December 1914, a letter from Torreón dated 14 October 1914 and another from Torreón dated 30 October 1914AQ, Fondo Poder Ejecutivo Sec 2ª Hacienda C-1 Año 1915 Exp. 144.

On 3 July 1915 the interim governor of Querétaro reported to Veracruz that some soldiers from Obregón’s Cuartel General were offering Obregón notes of 1 August 1914 and various Durango notes, saying the period for their circulation had been extended. As the government only knew of the disposition that these notes were to be exchanged by 30 June they (and businesses) were refusing them. Veracruz replied that the Obregón notes and various Durango issues listed in the 8 December decreeDecember 1913, signed by M. del Real Alfaro, January 1914 signed by J. R. Laurenzana, Pastor Rouaix and M. del Real Alfaro, and August 1914 signed by Domingo Arrieta, José Clark and Juan B. Fuenteswere extended until 30 September by virtue of the decree of 19 JuneAQ, Fondo Poder Ejecutivo Sec 2ª Hacienda C-2 Año 1915 Exp. 199. This information was to be published in the Períodico Oficial but might not have been because the Villistas returned.

These he sent to the Administrador de Rentas on 6 Septemberibid..