This hacienda is located east of Coatlancillo, and grew sugar cane, corn and beans. It had a steam mill for processing the sugar cane and produced loose sugar, sugar loaves and a distilled spirit called cazacha.

Ignacio Cisneros Vázquez was from Sayula. He owned Coatlancillo and its surroundings and lived at the hacienda. 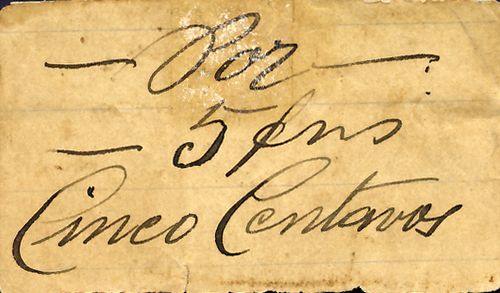 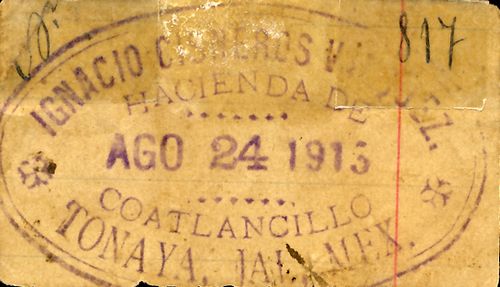 It is unclear whether Manuel Vergara and Adofo Ochoa ran the hacienda "El Refugio" or a local store. Adolfo Ochoa was reported in charge of the hacienda del Refugio, in the municipio de San Gabriel, in July 1913El Diario, 29 July 1913.

The hacienda issued notes drawn on Vergara y Ochoa with revenue stamps on the reverse. 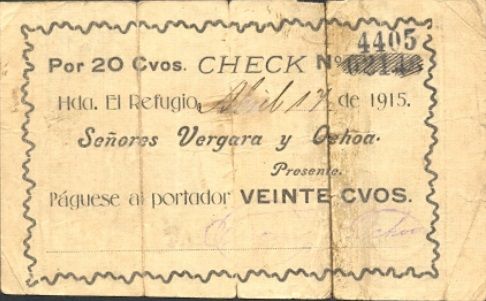 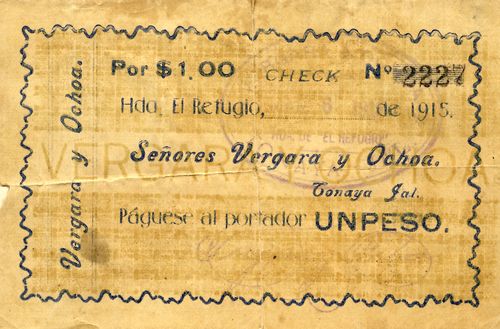 They then issued a different series or series, without revenue stamps as they were no longer available. 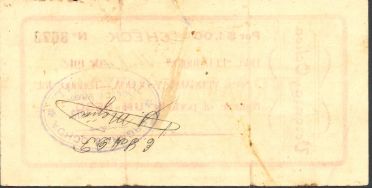 Finally, Vergara y Ochoa arranged for their notes to be legalised by the Agente de Timbre in Tonaya, S. Mejía. 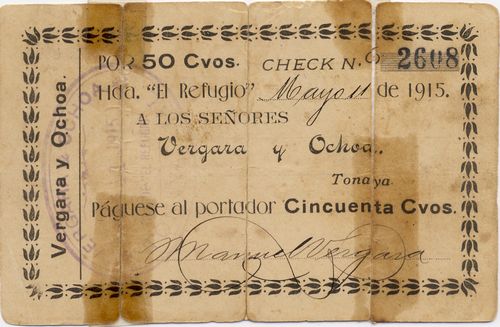 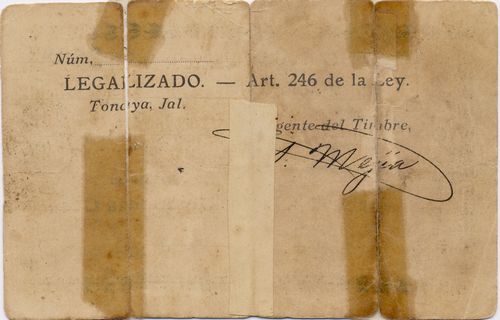 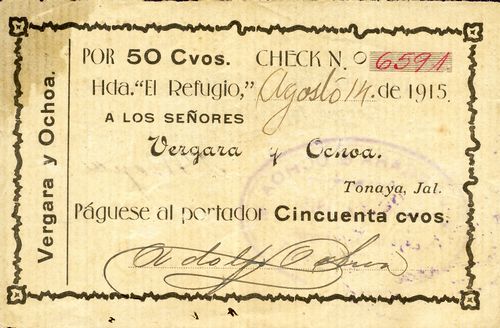 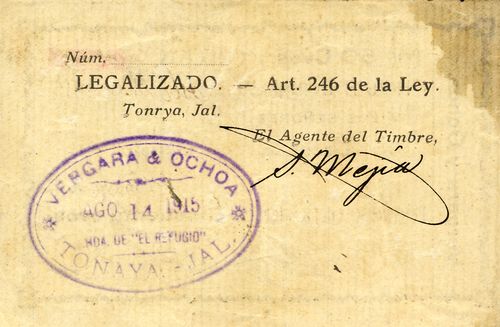 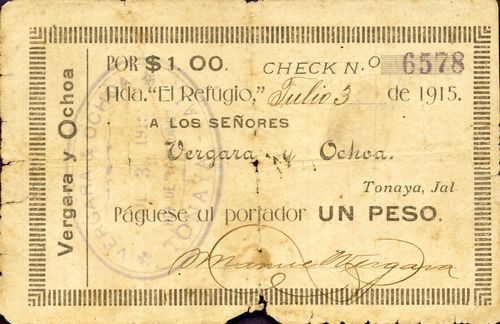 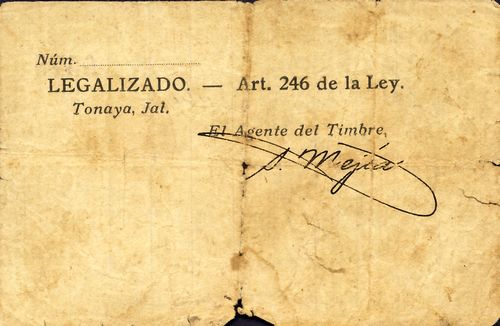 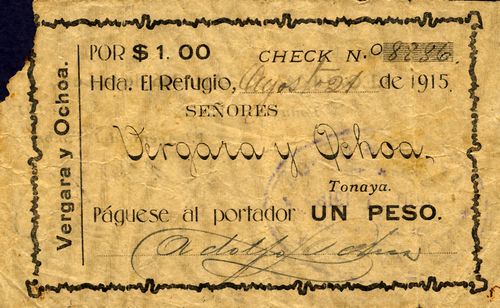 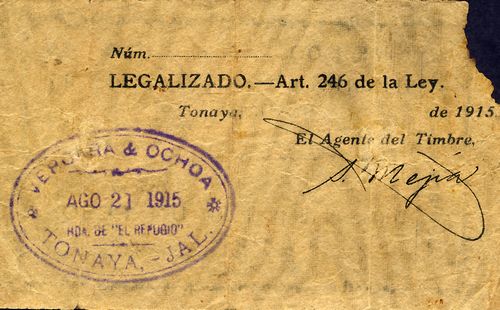 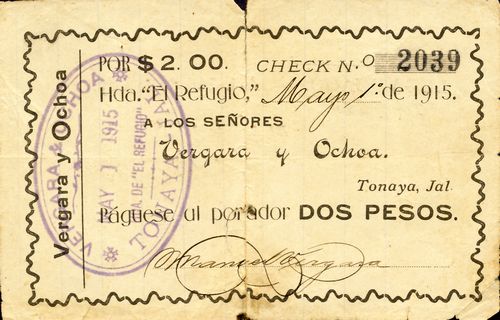 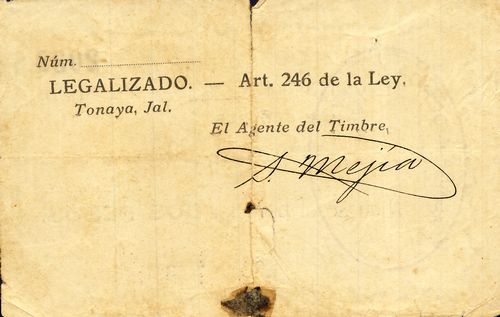 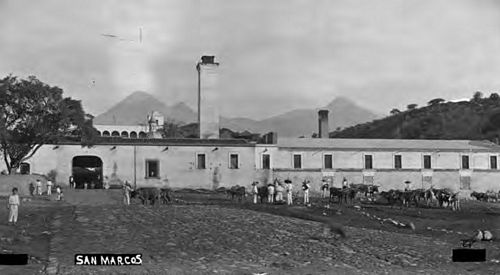 This was owned by Señora Concepción Palomar de Corcuera, who was the wife of Manuel L. Corcuera y Luna and a renowned socialite. 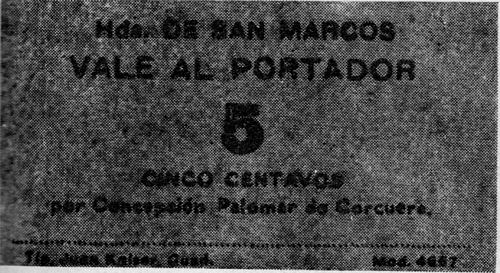 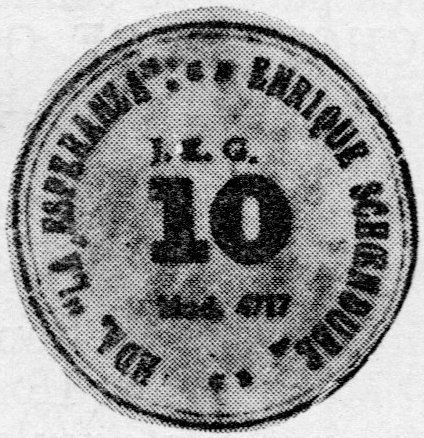 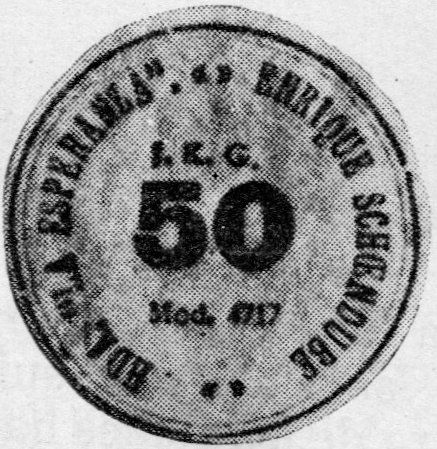 This hacienda was owned by Enrique Schöndube. Schöndube was born in Germany in 1861. From 1894 he established in Mexico an independent commission house that exclusively distributed the products of the Allgemeine Elektricitäts Gesellschaft factory. Machines, engines, turbines, generators, dynamos, boilers, transformers, pumps and all kinds of tools and electrical materials arrived at his warehouse from Germany and elsewhere, which he then sold or installed in theatres as well as in shops, textile factories or in local electricity generation companies.

Soon, with the capital raised in his commission agency Schöndube began to invest in other areas. From at least 1899 he obtained a concession from Guadalajara to use the Santiago River and began to invest in the generation of electricity. Between 1900 and 1901 he sought to establish an explosives factory and in this or another business he entered into competition with the French businessman Ernest Pugibet.

His career took a turn in 1905, when he partnered with Francisco Neugebauer, an Austrian engineer who had experience like few others in the field of electricity. Neugebauer had arrived in Mexico as a delegate of the Siemens & Halske company, perhaps around 1890 and the new partners brought together in-depth knowledge and relationship with the two major German electrical products companies, Siemens and AEG.

From 1906 to 1914 Schöndube expanded his interests, becoming a contractor for services such as the installation of water, drainage and paving networks. Sometimes he executed them directly (with Neugebauer while he had him as a partner), but other times acting as a speculator, or in relations of friendship, collusion and supply with the Compañía Bancaria de Fomento y Bienes Raíces and the Banco Central Mexicano.

The relationship between Schöndube and Neugebauer ended in 1911 when the latter returned to Austria. Schöndube closed the commission house a year later, left his residence in Mexico City and spent much of his time at the Hacienda La Esperanza, which he had acquired in 1909.