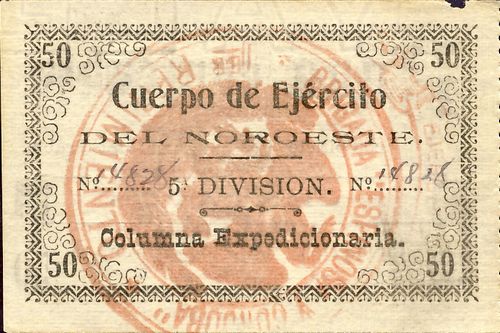 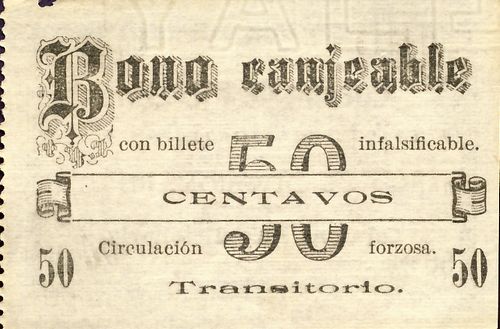 This 50c bono from the Columna Expedicionaria of the 5a División of the Cuerpo del Ejécito del Noroeste is catalogued as from Michoacán. It was of forced circulation and redeemable in infalsificables and so can be dated to late 1915 or 1916. 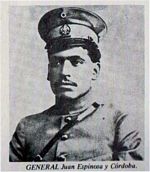 It has a stamp of the 'BRIGADA "ESPINOSA Y CORDOBA" - 1ER REGIMIENTO'. Juan Espinosa y Córdoba joined the Constitutionalist Army on 28 February 1911 and rose through the ranks to the post of General de Brigada, which was conferred on him on 23 January 1924. He served in numerous military bodies and took a very active part in the overthrow of the Porfirista dictatorship; he fought against Zapata in the state of Morelos, as well as Salgada in Guerrero and Huerta in 1913, after the decena trágica. He cooperated in the defeat of Villa’s División del Norte, in 1915, being present at the battles of Celaya and León, and, finally, took part in the Southern campaign in 1916. In June 1916 he was a General Brigadier in command of the 3a Brigada of the 5a División of the Cuerpo de Ejército del Noroeste, at Jojutla, Morelos, and fighting in Morelos and part of Guerrero. On 27 June he was invalided to Mexico City on account of his healthThe Mexican Herald, 5 July 1916.

He fought Villismo for the second time in 1918.

The 5a División of the Cuerpo del Ejécito del Noroeste also issued notes listed in Iguala and Taxco in Guerrero.