The title Ejército Libertador was used by the Zapatistas in Morelos and Guerrero and these states will have been the source of three notes with designs based on the $10 sábanas. These $1, $2 and $10 values with a blue underprint have several distinctive features: they have continuous border frames; there are no commas following ‘Tesorero General del Estado’ and ‘Interventor’; there are no abbreviations (‘Num.’ or ‘No.’) before the serial numbers; there is no dot before Vargas’ signature, and no printer’s imprint at the bottom, which suggest that they were issued somewhere other than Chihuahua. 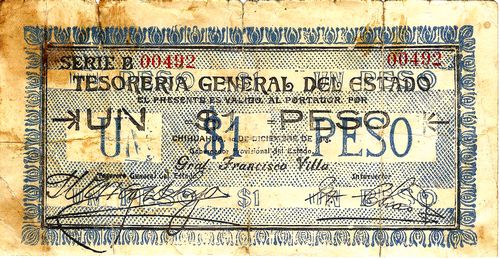 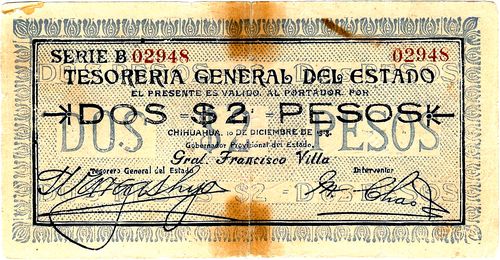 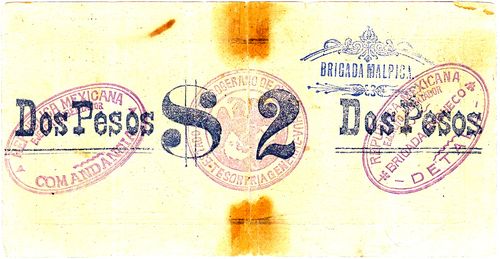 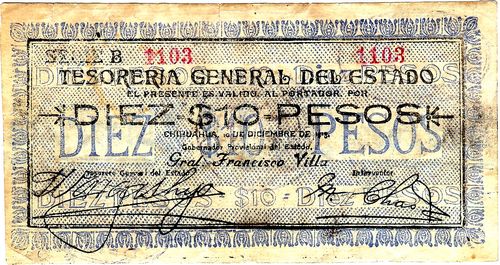 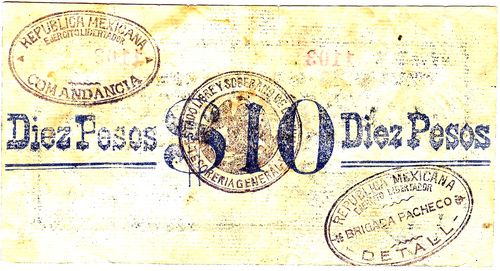 The Brigada Pacheco was commanded by General Francisco V. Pacheco of Huitzilac, Morelos. When the Convention named Villa as Commander in Chief of the Conventionalist Army he was nominally commander of Zapata’s Ejército Libertador though he went to great lengths when he met Zapata to assure him that he would continue to command. Their subordinates, however, immediately began to manoeuvre for individual power, destroying the co-operation between the two armies within only a few months. In May 1915 Roque González Garza appointed Pacheco Minister of War, indicating his trust in Pacheco and by extension the trust of Villa. By late 1915 Pacheco was feeling Zapata’s lack of confidence in him and insisted that he was still a loyal member of the Ejército Libertador, thus making Zapata even more suspicious. On 13 March 1916 Pacheco withdrew his forces from Huitzilac and Cuernavaca leaving the area open to occupation by Carranza’s forces. Zapata was appalled and went, personally, to see what Pacheco was doing. On 27 March Pacheco presented Zapata with a written description of his plan: he would take a strong column to the north, encircle Carranza’s army and attack it from the rear. Zapata presumed that Pacheco was either crazy or intended to defect, either to Villa or to Carranza, and had him taken prisoner and shot.

In February 1914 the Tampico, one of the three gunboats that comprised the Guaymas squadron, under the urging of Primer Teniente Hilario Rodríguez Malpica defected to the revolution in Topolobampo. Malpica was put in command. The Tampico was blockaded in Topolobampo by the federals’ Guerrero and Morelos and during one encounter almost destroyed. After repairs it put to sea at the beginning of June to attack Mazatlán buts its boilers failed. In the morning of 16 June the Guerrero sighted it adrift and sunk it. Malpica took his own life and went down with the ship.

There might have been a brigade named in Malpica’s honour or in honour of his father of the same name who was Madero’s Jefe de Estado Mayor and with him when he was arrested.

So these notes were possibly produced in Cuernavaca, Morelos at the request of Pacheco and with González Garza’s (and by implication Villa’s) knowledge and approval, for use by Pacheco’s troops, though it is more likely that they originated in Oaxaca.

On 10 October 1915 the Ministerio de Hacienda y Crédito Publico authorised[text needed] an issue of vales of one and five pesos and on 10 January 1916 the Consejo Ejecutivo in Cuernavaca ratified this decree and authorised the ministry to issue $2 and $10 notesAGN, Colección Cuartel General del Sur, vol. 1, exp. 2.25. An undated note records that the Ministero de Hacienda was unwilling to send the clichés for the $2 and $10 notes (AGN, Fondo Emiliano Zapata, caja 20, exp. 9). These pronouncements might be connected with this issue.