Bonos of the Tesorería General

Because of the lack of change on 7 April 1914 the governor, Miguel Bolaños Cacho, in his decree num. 2, authorized an issue of $100,000 in bonos of the Tesorería General, in 5c, 10c and 20c values, guaranteed by the public finances and redeemable in the same Tesorería General for coins or banknotes in multiples of five pesosPeriódico Oficial, Oaxaca, 8 April 1914.

On 26 March the state government had asked the governor of Guanajuato for a copy of his decree authorising fractional notesAO, Fondo Gobierno, sección Secretaría del Despacho, serie Correspondencia, caja 4541, exp. 1 and the Oaxaca decree was based on this earlier one. The Oaxaca decree specified the form of the bonos and declared that they would be of voluntary acceptance by the public and of forced acceptance by the Tesorería General, Oficinas Recaudadoras de Rentas del Estado and Tesorerías Municipales, in payment of any taxes. 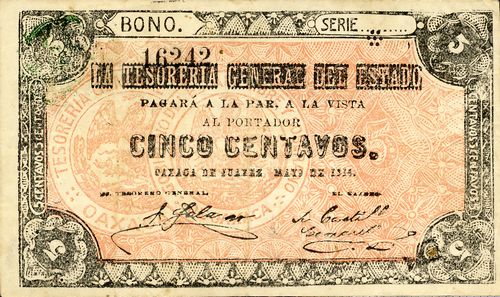 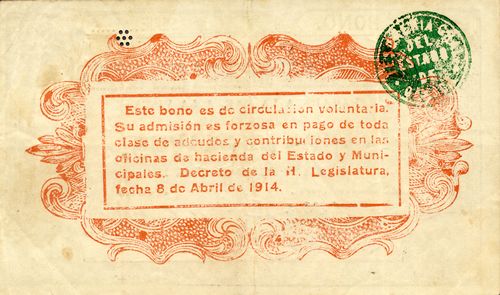 The printed signatures are those of the General Treasurer, Francisco Salazar, and the Cashier (Cajero), Abraham Castillo Camarillo.

On 19 April The Mexican Herald reported that "the governor of the state of Oaxaca has decided that the employees of the state government shall be paid in vales issued by the state treasury. These vales will be guaranteed by state bonds"The Mexican Herald, 19 April 1914. Confusing, but an indication of how these notes were to be put into circulation.

By mid-July Bolaños Cacho was forced to resign under pressure from General Meixueiro and his "Serranos" and in his place Congress provisionally named Francisco Canseco who lasted four months in power, at the end of which the capital of the state was occupied by the Constitutionalist Military Commander, Luis Jiménez Figueroa, at the head of 80 men, having managed to take advantage of the good faith of the locaI authorities.

Jiménez Figueroa took Canseco and various deputies prisoner. Two days later he proclaimed himself governor, but on 18 November,  only three days later, thousands of natives from the Sierra de Juárez, under the orders of Generals Meixueiro, Onofre Jiménez, Isaac Ibarra and Pedro Castillo came down to attack Oaxaca, and they took it the following day, causing Jimenez Figueroa to flee to Tehuacán, Puebla, where he was assassinated shortly afterwards.

Canseco became governor again, only to be replaced on 1 December by the Secretario General, Miguel Martínez, as provisional governor. Six days later, the latter handed the political power over to José Inés Dávila. Meixueiro remained at the head of the state’s forces, always alert against the manifest intentions of Carranza to incorporate Oaxaca into the Constitutionalist Revolution.

The formal break with the central government came on 3 June 1915 when the Oaxaca congress decreed that until constitutional order was reestablished, the Estado Libre y Soberano de Oaxaca resumed its sovereignty. The Carrancista División 21 then attacked from the Istmus to take the state capital, which it achieved at the beginning of March 1916. Governor José Inés Dávila evacuated Oazaca and established his capital in Tlaxiaco.