The paper sometimes shows a watermark composed of double-lined letters reading "L_doer Mills".
The green ink of the printing from the duty plate is bright on the J series and much darker thereafter.

The AZTEC BOND paper is the same found among the earlier 1 peso notes and may show the watermark horizontally or vertically, also inverted. The thick ribbed paper shows fine vertical ribbing and may show portions of a watermark "_ABASA ALVAREZ" or a large eagle.
The R series appears to be rare. The U series is actually two small series, none to be found in the 153000-181000 range.

Starting this date, the bottom inscription lacks accents and has a smaller space between SOTO and OAX.

Series Z's thick paper tore easily so these are difficult to obtain in better than Fine condition.

On the reverse, the decree number and date have been changed: "Decreto No. 5 del 10 de Julio de 1915." Up until this series, the blue color was fairly consistently a dark grayish blue, but from this printing on one finds a wide range of shades including ultramarine, a greenish blue, light blue, pale gray blue, etc.
In the inscription at the bottom of the front, OAXACA is now spelled out.

The colour of the serial number was changed from red to green with number l ,000,000. Same for the Treasury Seal.
The paper sometimes shows a watermark of double-lined capital letters reading WHITE (?). 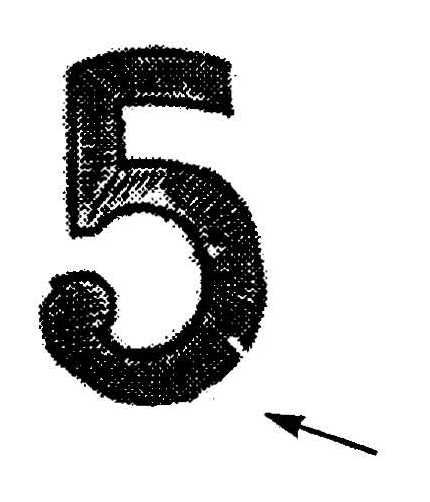 Besides the seal position changes, there are also minor typographic changes that indicate several printings which no doubt alternated with the P & Z 1 peso printings. These are mainly recognizable from variation in the letter spacing in PESOS and flaws in the "S"s. One of the "S"s shows a small break or gash in the outline of the bottom-right curve. Initially this "5" is found at the lower left comer, then appears at the lower right (on notes with the treasury seal at position 9), then appears once more at the lower left comer. So far, only ten or twelve notes have been studied - there may be much more to be discovered about these 24 September notes.

Starting this date, all 5 pesos notes have a border of two lines, one wavy, instead of the sawtooth typesetting.
The style of the "P" is different in the two "P" series, the first being sans-serif and tall.
The medium paper is actually two papers that are virtually indistinguishable except that they occasionally shows the watermark VOUCHER BOND in double-lined sans-serif letters or WHITEHALL in letters which are similar except they are slightly thicker and less distinct.
The thick paper on which some of the second P Series notes have been found can include purple ledger lines as well as
the more typical red and bluish gray lines.

On the reverse, the decree line has been changed: "Decreto No. 18 del 12 de Enero de 1916."
The U series was included in Rosovsky's list but I have not seen it. Considering how small the gap is between the latest serial number in the R Series and the earliest of the January 17th U Series, one might wonder if it really exists. It could be that a few 14 Enero unfinished notes were finished on the 17th - they would, of course, be quite rare.

The horizontally laid paper comes with a watermark "MEXICO" in dark (thicker paper) letters.
Only a portion of the "Hidalgo" watermark can be seen on a note. A portrait of Hidalgo is surrounded by rays, wreath, etc. and below are the dates "1810-1910" in double-line numerals.
This series exists lacking the serial numbers and treasury seal - an unfinished remainder.

This was listed by Rosovsky but I haven't seen it. If it really exists it is a very small printing, possibly an error made at the start of the January 31st printing or printing made on the 29th that for some reason was very small and probably left unfinished until the 31st.

Note 1,785,670 has the last two digits erased and re-entered (a correction?) at both positions.

The U series appears to be scarce. Judging from the serial number, it appears to have been an error where 14 Febrero dated notes were intermixed with and finished with the 10 Febrero notes or may have been numbered to replace some defective notes from the earlier issue.

On the reverse, the decree line has been changed: "Decreto No. 12 de’l 18 de Enero de 1916." It is believed this is simply a transposition of the previous numbers.