On 27 August 1915 Dávila passed an important decree on the circulation of paper money in the state.

In his explanation to the Congress and his preamble to the decree Dávila explained that some kinds of currency circulating in the state were already presenting difficulties and it was necessary to calm the alarm, to stop speculation and to reassure commerce. The press in Mexico City had declared that the sábanas were being redeemed, and the Veracruz press had published Carranza’s invalidation of some “Gobierno Provisional de México” notes but these should not be allowed to effect financial transactions in Oaxaca. Moreover, any future national government should, as in the past, take on the obligations of its predecessors. However, at the same time, it was necessary to stop depreciated paper currency flooding into the state to be exchanged for good currency or riches, and put an end to speculation, but to acknowledge the money that was already in circulation and indispensable for trade. Therefore, on the advice of the banking and business communities, he was decreeing:
(1) that the government’s títulos de crédito and banknotes from legally authorised banks of issue were to be of forced circulation and legal tender for any amount.
(2) that certain other issues should be legal circulation, provided they were revalidated in accordance with this decree. These were to be of forced circulation but only for denominations up to twenty pesos: denominations about twenty pesos would only be of forced circulation in transactions above five hundred pesos.
These issues were:
(a) the Obligaciones del Erario Federal, or “Bonos Carvajal”
(b) the “Ejército Constitucionalista de México” notes
(c) the “Gobierno Provisional de México” notes, whether from Mexico City or from Veracruz
(d) the sábanas from Chihuahua, and
(e) the dos caritas, also from Chihuahua.
(3) Holders were given fifteen working days to have their notes revalidated in the Jefatura de Hacienda or Tesorería General in the state capital and in the Recaudaciones de Contribuciones in the districts. After that time notes without revalidation would cease to have legal circulation in the state.
(4) Speculation and any discounting was to be forbidden and punished.
(5) counterfeiting the resello was also to be punished.

The government prepared thirty seals and distributed them to the Jefatura de Hacienda, Tesorería General and the various Recaudaciones de Contribuciones. They were to be returned after the period for revalidation had ended.

On 27 September the jefe político of Miahuatlán, Pedro Figueroa, reported that the notes that the Tesorería General had sent to the Teniente Coronel Pagador Sr. Felix García Ramos to pay the troops of Coronel José María García Ramos lacked the resello and businesses were refusing to accept them because the Recaudación would refuse them. The government told the Recaudación to revalidate the notes but in the meantime to accept them. It would therefore return the resello, AO, Fondo Histórico 1, sección Período revolucionario, serie Gobernación, caja 1230, exp. 5 telegram Jefe Político to Secretario General, 27 September 1915: telegram Secretario General to Jefe Político, 27 September 1915. The telegram refers to 'el resello correspondiente'. Does this mean that there was a way to distinguish the Miahuatlán resello?.

The Miahuatlán seal was not returned. Two other seals were worn out through use, but at a meeting on 30 December 1915 in the Tesorería General, attended by José Zorrilla, the Tesorero General; Luis Mario Saavedra, the Contador Mayor de Glosa; Manuel Velasco, the Contador of the Tesorería and Abraham Castillo Camarillo, the Cajero of the Tesorería the remaining twenty-seven were destroyedAO, Fondo Histórico 1, sección Período revolucionario, serie Gobernación, caja 1230, exp. 5.

On 6 October the Jefe de Hacienda reported on the 125,994 notes, totalling $728,458.50, that had been revalidated by his JefaturaAO, Fondo Histórico 1, sección Período revolucionario, serie Gobernación, caja 1230, exp. 5. These were:

Note that this includes 588 $2 sábanas-style notes of the Ejército Libertador.

The outstanding question is what did this revalidation consist of. We know it was in red ink, and that there was no difference between the stamps used by the various offices. No resello identifiably from Oaxaca is known on any of the issues mentioned in Dávila's decree and it seems inconceivable that all revalidated notes were destroyed.

A possibility is the small red rose known on Ejército Constitucionalista notes, dos caritas, Gobierno Provisional de México notes and Veracruz notes. This is also known on a $2 sábanas-style note, that can also be assigned to Oaxaca. 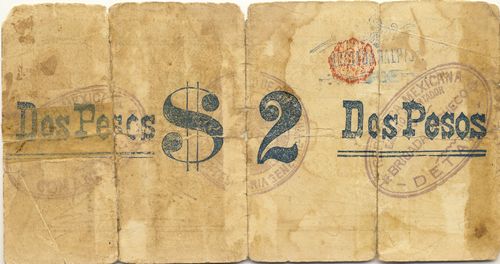 While other districts were still acknowledging receipt of decree núm. 10 the presidente municipal of Nochixtlan, Porfirio Zarate, on 5 September, was reporting that businesses and individuals were already refusing to accept sábanas that had been revalidated by the local Recaudador de Contribuciones. He was told to persuade the businesses of the convenience of accepting the notes, whilst the government composed another dispositionAO, Fondo Histórico 1, sección Período revolucionario, serie Gobernación, caja 1230, exp. 5 telegram Nochixtlan to Oazaca, 5 September 1915: Secretario General, Oaxaca, to Porfirio Díaz, Nochixtlan, 8 September 1915.

Dávila’s decree foresaw that the revalidation might be copied and this proved to be the case.

On 13 January the Tesorería General reported the existence of $1 Gobierno Provisional de México notes, entirely mint and with a probably false resello. The Inspector General de Policía was told immediately to investigate the source of these notes and to detain those responsibleAO, Fondo Histórico 1, sección Período revolucionario, serie Gobernación, caja 1230, exp. 5.

On 22 January the Jefatura de Hacienda sent the Tesorería General $9,500, a considerable part of which were notes with an obvious counterfeit stamp (con resello notoriamente falso). The Tesorería said it would accept them this one time but in future would refuseAO, Fondo Histórico 1, sección Período revolucionario, serie Gobernación, caja 1230, exp. 5 oficio 48 Tesorero General yo Secretario General, 22 January 1916. The Jefe de Hacienda complained that the federal Oficinas Recaudadores (especially the Admimistraciones Principales de Timbre in Oaxaca and Tlaxiaco) had sent him these notes, so, on instructions from the Tesorería, the Jefatura told its office not to accept such notes, a message that caused alarm both in the capital and in the various districts. Since the fault lay in the ease with which the resello could be imitated, and only a long and laborious search in all the lists of serial numbers made by the various offices could establish whether a note was legitimate, the Tesorería, on 8 February, suggested rescinding the instructionAO, Fondo Histórico 1, sección Período revolucionario, serie Gobernación, caja 1230, exp. 5 oficio 474 Secretario General to Tesorero General, 8 February 1916.