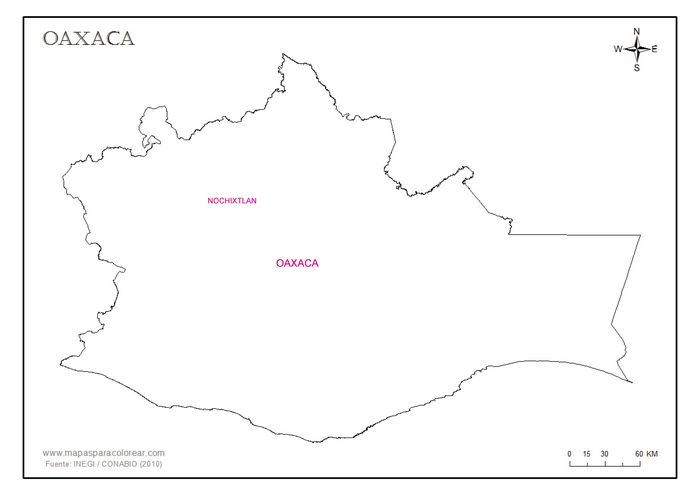 The Constitutionalists overran the city of Oaxaca in early March 1916. The Dávila government reestablished itself at Nochixtlán and was soon printing more paper money in 1 peso and 5 pesos denominations. These were authorized by a decree dated 10 March[text needed], referred to on the back of the notes. They are the direct successor to the earlier series.

Compared to the earlier notes, the Nochixtlán issues are relatively straight forward. They were typeset in black and printed on a rather thin, white wove paper. All $1 notes are SERIES A 1 and the $5 are SERIES O. All are dated 15 March 1916. The back is the same on the two denominations and the faces share the same layout and most elements. Serial numbers are in red, appearing twice on the face. The treasury seal is on the back and seems to have been applied without too much concern about its location, usually just to the right of the Hidalgo portrait towards the middle or top. There are two signatures on the face towards the bottom. The left one is always printed with a handstamp, while on the early $5 notes the right one is manuscript, otherwise handstamped. Handstamped signatures are usually black or blackish violet, though a true violet is occasionally found and some of the later $5 notes have dark blue signatures.

Despite their appearance of uniformity, at least two printings of each denomination can be detected from slight differences in the typesetting.

The First Printing shows the dash before "U" of "UN" closer to "Pagara" than to the "U ." The top of one of the large "1 "s in the right comers shows a dent just above the tip of the left-pointing serif. This numeral is at the lower right on the First Printing.

The Second Printing shows the dash about equidistant from "Pagara" and the "U" of "UN." The large "1" having the dent is at the upper right comer.

The treasury seal is violet and at a somewhat higher position on the earlier notes. This value is known without the signatures, but I have not seen it and can't say which printing it is from.

There appear to be two types of the 5 pesos, representing a resetting of type to change the plate over from one denomination to the other. Within these two "types" there are some relatively minor variations in type alignment which probably occurred because the printing chase was slightly loose (though it would be difficult to establish this point with certainty).

The minor variations within these two types are as follows: "Type 1" notes may show a variation of about 1 mm in the space between "$5" and the double vertical line to its left. The "l' of "El Tesorero" is sometimes dropped down a little bit. "Type 2" notes show two different spacings between "$5" and "SERIE": 1.4 mm and 2.0 mm.

Throughout the printings there is a progressive deterioration of some of the small elements that form the frame. In the bottom frameline, the 11th element from the left is sometimes missing or thre may be a ":".

The treasury seal is usually just right of Hidalgo's portrait straddling its right frame, but 62606 has it almost exactly in the center of the text.

The reason for the different colored treasury seals is not known.

Signatures can be black, violet or blue (late numbers). There are two types of the right signature, recognized mainly by the size of the large loop. It is larger on the earlier notes - mostly before 40000.

Another variety occurred when a different numbering device was used for applying the serial numbers so that the numerals are much wider than on most. The examples recorded are between 46787 and 46843. They are rare, but difficult to evaluate.

A postcript to Dávila's issues. Oaxaca did not immediately sign up to Carranza’s 1917 constitution. In May 1920 a provisional governor, Jesús Acevedo, on assuming power, issued his decree núm. 1Penódico Oficial, Núm. 1, 13 May 1920 reasserting the earlier constitutional arrangements. This was interpreted as validating Dávila’s issues, but only in acceptance as payment for government taxes Mecurio, 12 May 1920. Twenty days later, Adolfo de la Huerta assumed the presidency, and his supporter Acevedo recognised the 1917 Constitution. So a limited, theoretical window to cash in any outstanding notes.