The principal shareholder was Manuel Rivero Collada, together with a group of Spaniards. The bank’s original capital was $3,000,000 and its growth was so notable and rapid that on 25 July 1904 it saw the need to increase its capital to $6,000,000, and the new issue was completely subscribed. Another sign of the sound reputation it enjoyed is that its stocks were quoted on the Spanish Stock Exchange.

The bank had two branches in the state of Puebla, in Tezuitlan and Tehuacán and had correspondents throughout the country and abroad.

By 1908 the Banco Oriental had acquired almost all the shares that made up the capital of the Banco de Chiapas and the Banco de Oaxaca. In January 1909, it proposed to the Secretaría de Hacienda that the banks merge, expressing that "the object [...] it is to constitute a great regional bank with powerful elements that can serve, not only the interests of industry and commerce, but is in a position to inspire absolute confidence in the public.". On 7 June the merger was formalized with the approval of the Secretaría de Hacienda. The Banco Oriental's share capital increased from $6,000,000 to $8,000,000 which allowed it to occupy the second place in the provincial banking system. 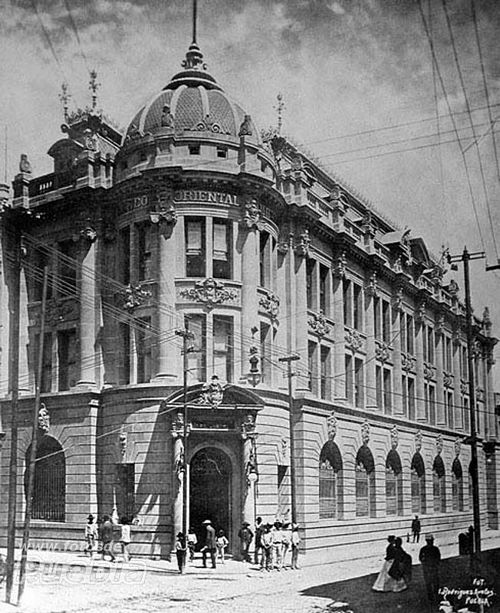 The American Bank Note Company produced the following notes. The ABNC engraved six special vignettes, charging the bank for just three as a discount on the total price. These were a portrait of Estevan de Antuñano (C 233)Estevan de Antuñano was born in Veracruz in 1792. Being the son of Spaniards, at the age of ten he was sent to Spain to study. Later, he spent several years in England where he became familiar with industrial work. In 1802 he returned to Veracruz and began to work in commerce. He established himself in Puebla in 1816, after marrying a rich heiress who was the owner of important haciendas in the Valle de Atlixco. After serving in the Republican militia he returned home to modernize the manufacturing industry. Despite opposition, he managed to successfully establish a seed separator plant in Veracruz and two large textile factories in Puebla.
He died in Puebla in 1847. A month before he died, the Congress of the State of Puebla declared him “Meritorious Founder of the Textile Industry”.
, the Palacio Municipal (C 715), the statue of Independencethis statue was unveiled in the old Paseo Bravo and is now situated at the junction of Avenida Juárez and (C 719), the cathedral at Puebla (C 716) and a bird’s eye view of Puebla (C 723). The city’s coat of arms, granted by Charles V, is engraved on all the reverse plates.

Following Huert's relaxation of the Ley General  in March 1914 the bank added a 50c value.

The bank also ordered some $1 and $2 notes. These were printed in July 1914 and the ABNC engraved a special vignette of the bank building (C 1387). However, they were never delivered to the bank before it lost its concession and were destroyed in December 1924.

In December 1913 the bank's notes, which were the commonest out-of-town banknotes in Mexico City, were being exchanged by the Descuento Español, a subsidiary, on about the same terms as the other state banks with the Banco Central MexicanoThe Mexican Herald, 19th Year, No 6682, 17 December 1913 so there was less difficulty experienced in handling them than with the notes of the other state banks. One central commercial establishment had a notice posted to the effect that it would accept notes of the Banco Oriental de Mexico in payment of purchasesThe Mexican Herald, 19th Year, No 6683, 18 December 1913.

When Carranza’s Comisión Reguladora e Inspectora de Instituciones de Crédito inspected the bank, the bank declared  that it had a little more than $16,600,000 in metallic funds and so was within the limits of the Ley general but in September 1915 the Comisión’s inspector disagreed and two months later withdrew its concession, despite the efforts of major military and political dignitaries. This was a major loss for the Spanish colony and businesses in central Mexico, as well as for the Banco de Descuento Español and the Banco Español Refaccionario, and the numerous branches in Oaxaca and Chiapas.

Among the agreements that the Secretario de Hacienda, Alberto Pani, made with the representatives of the various old banks was one to unify the operations of the Banco Oriental de México, Banco de Descuento Español and Banco Español Refaccionario, since they shared directors and shareholders. Then, on 18 December 1925, Pani signed an agreement with Juan de Dios Robledo, manager of the Banco Oriental de México, to redeem the federal government’s debt with the bank with government bonds and resolve outstanding disagreements and claims.

Finally, on 30 August 1930 president Pascual Ortiz Rubio issued his decree for a Comité Liquidador to dissolve the old banks of issues.